With the Iceland gallery in its final stages of preparation meaning that I no longer have to worry about it, it does free up some much needed time to plan the next trip: The Danakil Depression in Northern Ethiopia. And this trip really does represent my biggest challenge to date.

Looking at some of my recent trips (Iceland, Antarctica and the Bolivian Andes being examples in point) and you probably come to the conclusion that I’m a cold weather kind of guy. And I am. So the thought of spending time in a place whose average daily temperature – in Winter – doesn’t drift much below 40 °C doesn’t really make me want to rush and pack my suitcase. To be fair, I’ve survived 40 °C plus temperatures before, in Egypt, but that was insanely low humidity and I spent much of the midday hours under cover. In the Danakil Depression, the lowest point in Africa and the second lowest land point on the planet, the humidity is to put it mildly, horrific. 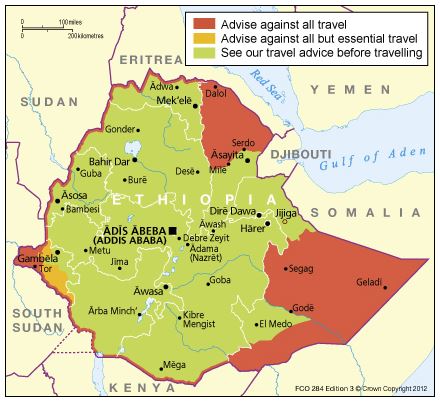 The Danakil Depression – Dalol on the map – isn’t exactly recommended.

The second aspect that would raise an element of concern for most is its location about eight kilometres from the border with Eritrea. A hotly disputed border. The Foreign & Commonwealth Office (or FCO) – the UK’s governmental department responsible for issues travel guidelines and assisting UK nationals around the World via regional embassies – is the go-to site when assessing the safety of travelling to various countries. The travel advice for Danakil is “Advise against all travel”. Digging a little deeper however and, aside from an unfortunate episode in 2012, there have been no real problems in the past few years. That said, however, without FCO approval, no normal travel insurance policy will cover you. So I’ve had to look into specialist insurance.  I don’t know if I should be comforted or concerned that they all include kidnap and torture cover.

The third issue is that the area is the home to the Afar tribe, a nomadic people who live off the land by mining salt from the region’s salt flats and transporting it back to civilisation via  camel train. My experience of African people (in Africa) is that they are a proud race but apparently the Afar take that pride up a few notches. So, I’ve got to read up on Afar (and tribal) societies, lest I do something that offends. Not that I’ll come to any harm, but it could well mark the end of my being allowed in what is their homeland.

But despite all of this it is the fourth point that, for many, would be the most problematic. The Danakil Depression is regarded as one of the most remote and inhospitable places on the planet. It is a barren, unending desert scrubland. There is no running water here, surface lakes being either extremely poisonous or highly acidic. There is no gas or electricity supply, no medical facilities, in fact there are, well, no facilities at all. Including toilets. If you are the least bit conscious about bodily functions then this is not the place for you. It is not so much you go and squat behind a bush – there are no bushes. No, when you need to go it is a case of grab the paper, walk two hundred metres out on the flat expanse and hope no-one heads your way. And, given that, you can safely assume that there are no washing or bathing facilities at all – a highlight of day eight on the expedition I’m taking is that we get to have a makeshift shower in a river.

So, why on earth would anyone want to put themselves through all of this?

The first reason is that the Danakil Depression hosts the second of five known lava lakes on the planet – the first being up a mountain in the Democratic Republic of the Congo and currently inaccessible after recent civil war. It may be deemed the second best, but it is the oldest lake and still hugely impressive.

The second is that the Danakil region itself hosts some of the most insanely coloured and textured landscapes ever. They look like they’re from another world, or a game designers imagination.

And, as a budding landscape photographer, what more could I ask?