A Photographer’s Voldemort: The Self-Critique

In the two week period I spent travelling along the southern coast of Iceland I took 3136 photographs. This includes 200-300 individual images for stitching together in various panoramas, a number of bracketed shots for HDR images as well as the inevitable ‘click it and hope’ shots. There are also countless shots from the ice along Jokulsarlon beach – getting the sea and ice to form interesting patterns was more an exercise in patience and luck than skill. My task is to distil these 3136 down to 25 photographs for the website: More than that and the gallery would likely feel too big and any less may cause me many a sleepless night about the shots I left out.

It all starts simply enough. The photographs are loaded into Adobe’s Lightroom software and all are given a rating of three stars. As I walk through each image the out-of-focus and otherwise unsalvageable shots get reduce to one star; good images and those with promise get four stars.

Over the past few weeks, between travelling for work and, of course, going to Israel I have managed to get the first pick – the four stars – down to 180 photographs. Yesterday, after 11 hours, I have managed to get second pick to 68. Those 11 hours were also spent processing the photographs and stitching together the panorama shots, some of which have worked out well and some of which not so much. And so on to third pick. The critical analysis of those 68 images. The moment I dread.

No one talks about this aspect of the photographic workflow which is a surprise as it is arguably the hardest. I once asked wildlife photographer Daisy Gilardini about how long she spent processing photographs to which she replied between 60 and 90 seconds. It isn’t much time, but then I suspect that is the point: if an image is good, it won’t need much time to ‘tidy up’. But I feel I asked the wrong question. I should have asked “How do you select those photographs?”

Now, what makes a good image is always going to be an emotive topic and a question with no real answer. Humanitarian photographer David duChemin has long written about the importance of creative ‘vision’ and storytelling in photography and he should know – humanitarian photography has to generate a reaction in the viewer otherwise it has failed. By contrast even if a landscape shot fails to make you immediately pack your bags and get on a plane, at least it can still be pretty.

Many of the photography-related magazines include regular features that interview a notable photographer and ask the usual questions such as how they got involved in the industry. But none, that I have seen at least, ask the photographer to pick an image or two from their portfolio and explain why that selected that image and not one of the others from the same shoot. What was it that drew them to an image above all others? I once brought the idea up on a forum for a well-known UK magazine and was greeted by a wall of silence from both fellow readers and staff alike. But I can’t believe that I am the only one to struggle with self-critiquing work. Perhaps every photographer struggles with self-critique more than they would like to admit and, like Harry Potter’s nemesis, find it easier not to openly discuss the topic in the hope that it will not look their way.

Here is a classic case in point from the second pick of Iceland. Two images from one of my trips to the beach at Jokulsarlon. Can you choose which you prefer? 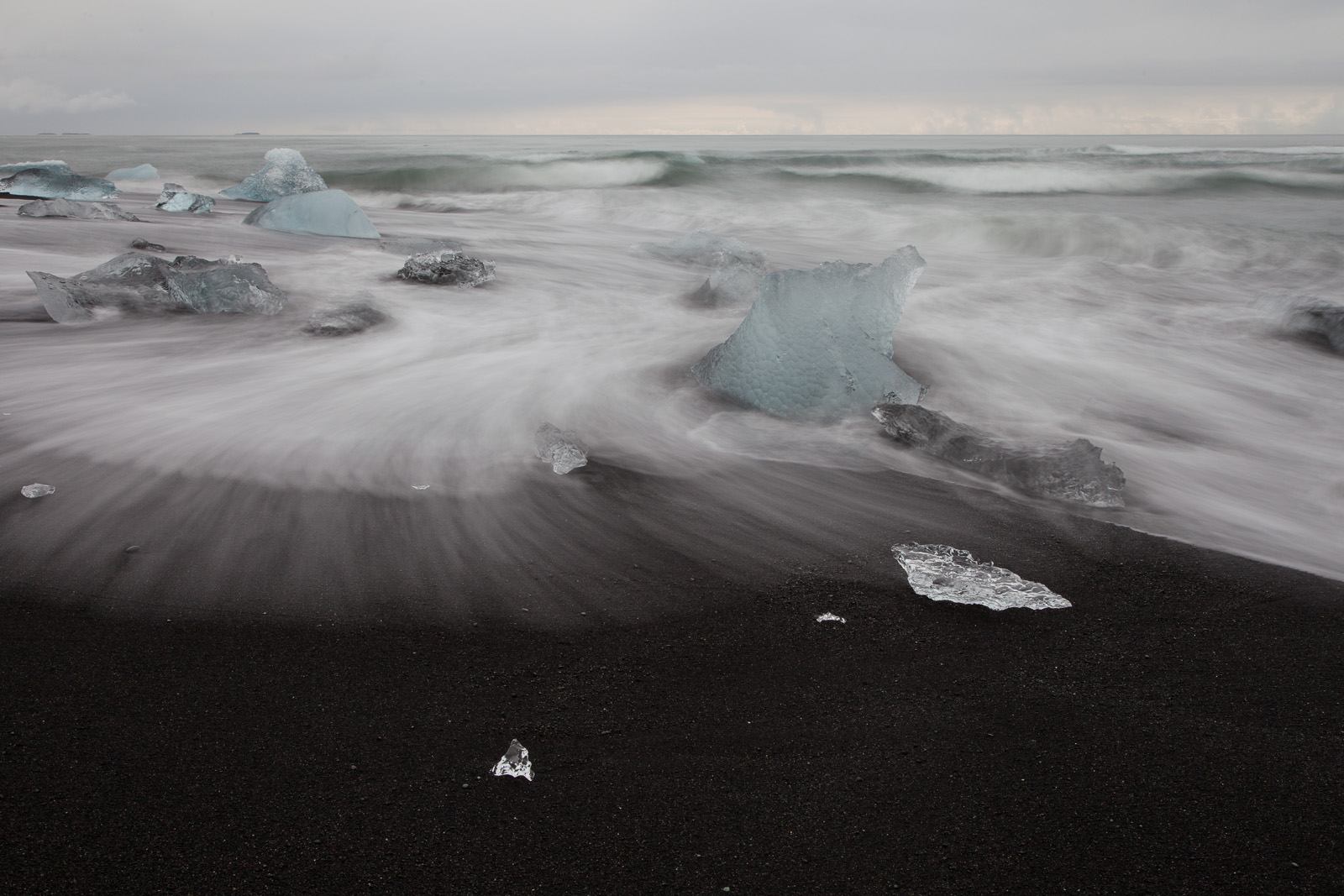 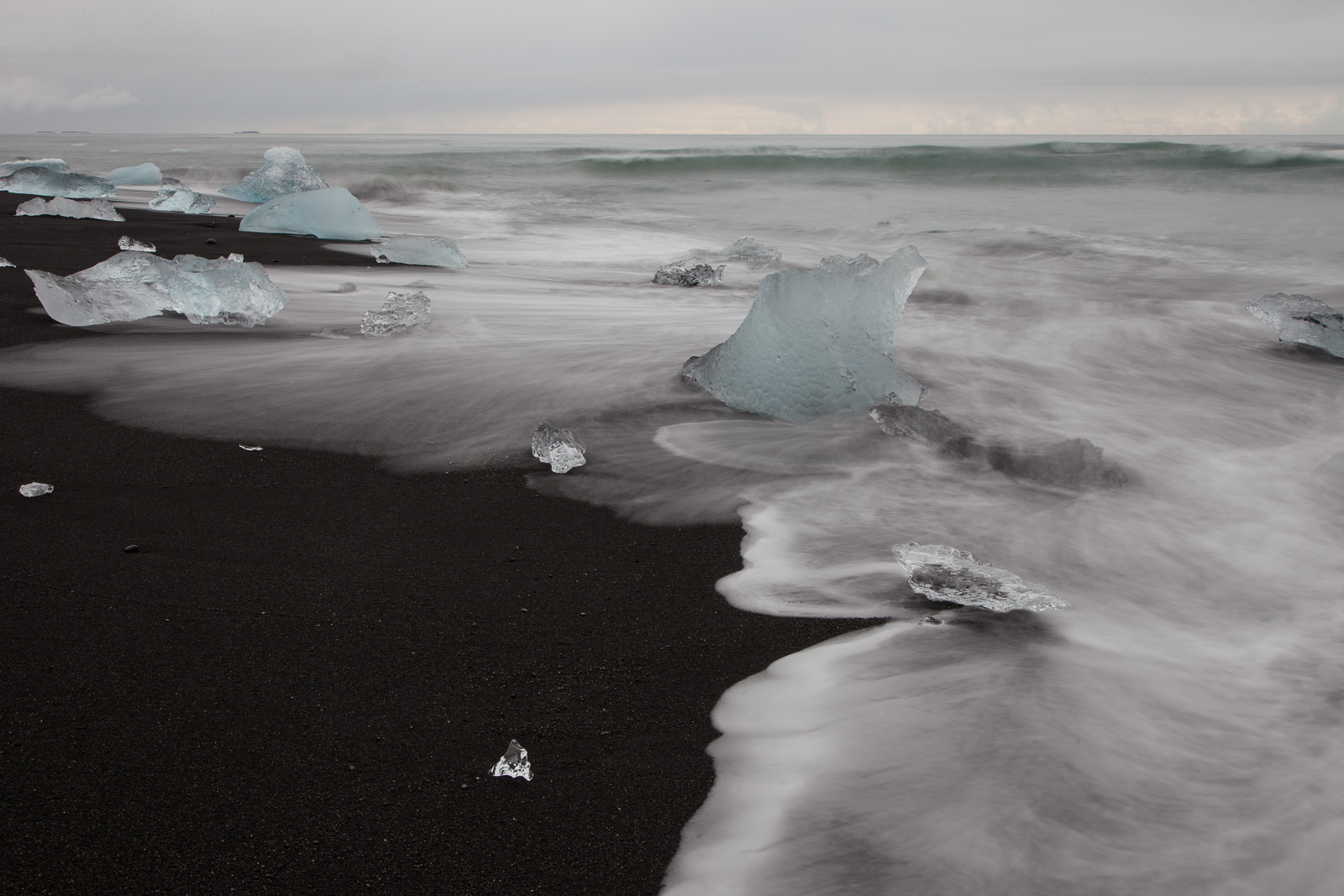 The problem is I cannot. What I wanted to capture was the essence of the beach: the striking black volcanic sand, the motion of the sea wrapping itself around the icebergs and the limited palette of grey, blue, black and white. Both images do just that. But what now? Where do I go from here?

I am sure that too will learn the art of self-critiquing my work. But, if anyone knows of a site, a magazine or any other resource where photographers show examples of how they self-critique, please let me know.

Oh, and I just realised that my Voldemort analogy may paint photographers as wizards and non-photographers as Muggles. But more worryingly, it implies that I’m Harry Potter. I do not believe this, of course, and I don’t want to live in Harry Potter’s world. For the time being, at least…

I’ve just completed the six-month edit of the photographs from my trip to Antarctica and uploaded the selected images. It has been an interesting process; when I first started in photography I used to select my favourites and uploaded as soon as possible. These days I go through a more measured process. It works well for me, so I though that I would share it.

First I make the initial select pretty much on the spot as part of the end-of-day keywording. This selection usually forms the broad outline of the final selection and the obviously strong images get picked up here.

Another selection gets made when I return home – the Lightroom catalogue from my travel laptop gets merged with the catalogue on my desktop PC and I then take the opportunity to run through the images on a 30″, calibrated, monitor. Mostly the in-the-field select survives this second critique more-or-less unscathed – after all not too much time has passed between the two. Sometimes I drop a shot or two out, sometime add a couple.

After about two months comes the next select. It’s a good time to return to the work; enough time has passed that the memory is beginning to get hazy whilst still being able to remember enough of the context in which the shot was taken. I also take the chance to go through all the initially rejected shots as the distance of time allows me to be more impartial.

The final select is about six months in. At this point I go through everything and apply the acid test: would I pay to print this? If yes, it makes the cut, if not it’s deselected.

In the case of Antarctica, the above process works out as follows: