The other day I was talking to someone just getting started in photography and later got thinking about what I have discovered over the past few years and if there was any advice that I could give other than the usual – and obvious – “know how your camera works” or “practice, practice, practice” advice. And there is: Good photographs rarely just happen.

Part of the joy of solo travel is that I can afford to spend lots of time waiting. And waiting. Usually it is for inspiration, or thinking about how to shoot a scene, or the light. But often it waiting for people to get out of the way. Iceland is a great case in point. One of the popular tourist spots along the southern coast is Dyrholaey. It is especially popular with bird watchers as several species, including puffins choose it as their nesting grounds. So, leave it to me to visit during nesting season when, what felt like every bird watcher on the planet, was out on the cliffs keeping a lookout. If that were not enough there is a fantastic black volcanic sand beach there with a cave at the far end and I can understand why people were keen to walk along to the cave and back. I would, usually. But I had this image in my head and it did not include people on cliffs. Or beaches. Or even, as cute as they are, a passing puffin. It just had the landscape.

So I set up the tripod, framed the shot, ran a few test shots to check focus, exposure and the creative look and then waited. For a few hours. The cliff line would clear, but people were still on the beach, or vice versa. Or both were clear, but the clouds had moved in. There was always something not right. I waited so long that the tide came in, changing the images, luckily in a way I liked.

Then it happened: No people, no birds, no grim clouds and an, as if to reward me, an incoming wave. Lovely. 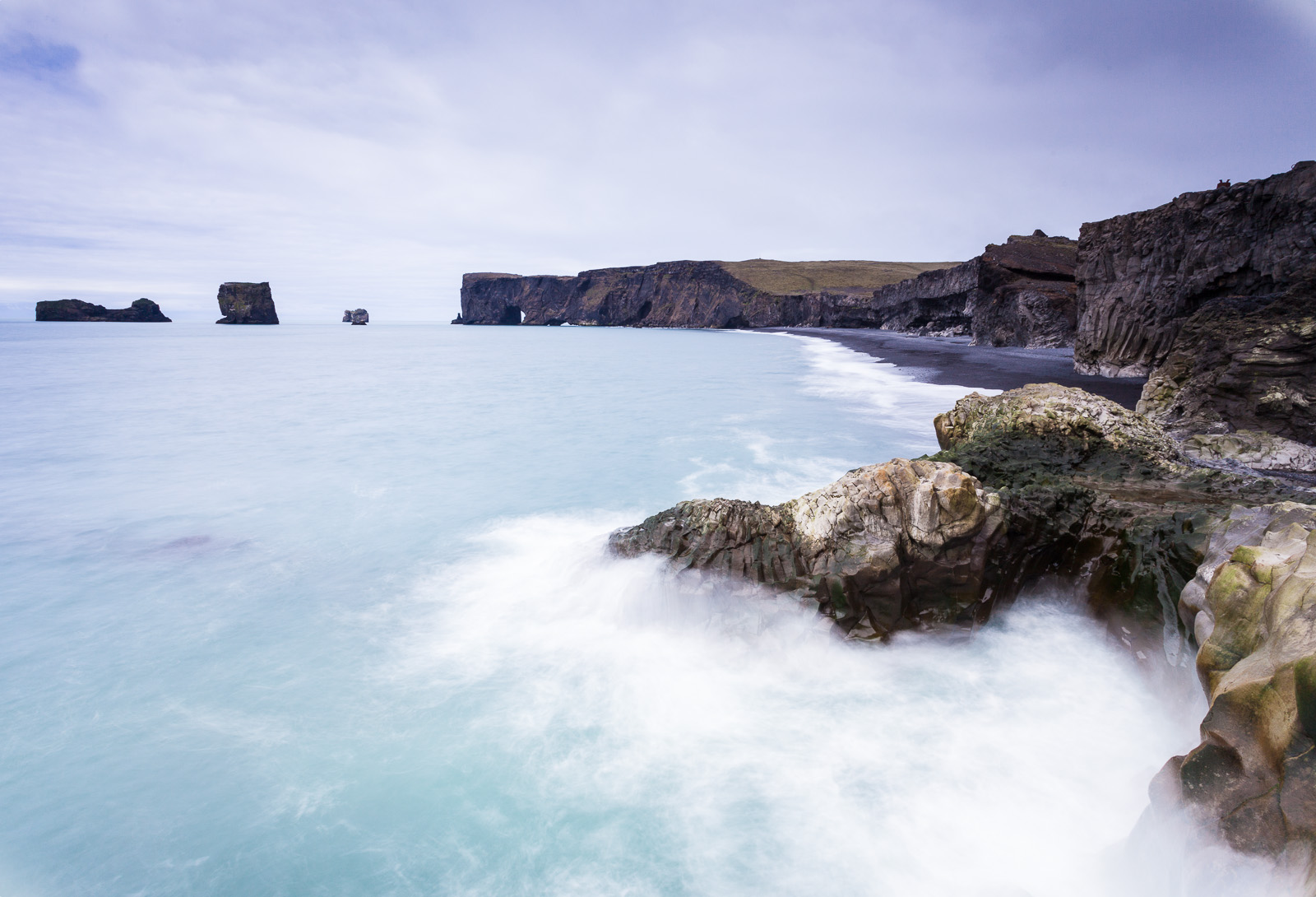 Now yes, I could have cloned people out in post production, but I shoot to print at a metre plus in size and unless you’re really very good, Photoshopping can be spotted. Anyway, you really can’t remove clouds or add waves in Photoshop so getting it right in camera is usually the best course of action. So, my advice is simply that. Good shots don’t just happen – you make them happen.

By changing your viewpoint, or removing the waste bin sitting next to the rustic door, or by picking up rubbish seen in frame. Or simply by waiting.

Here’s another use of filters in Iceland. But which filter, if any? 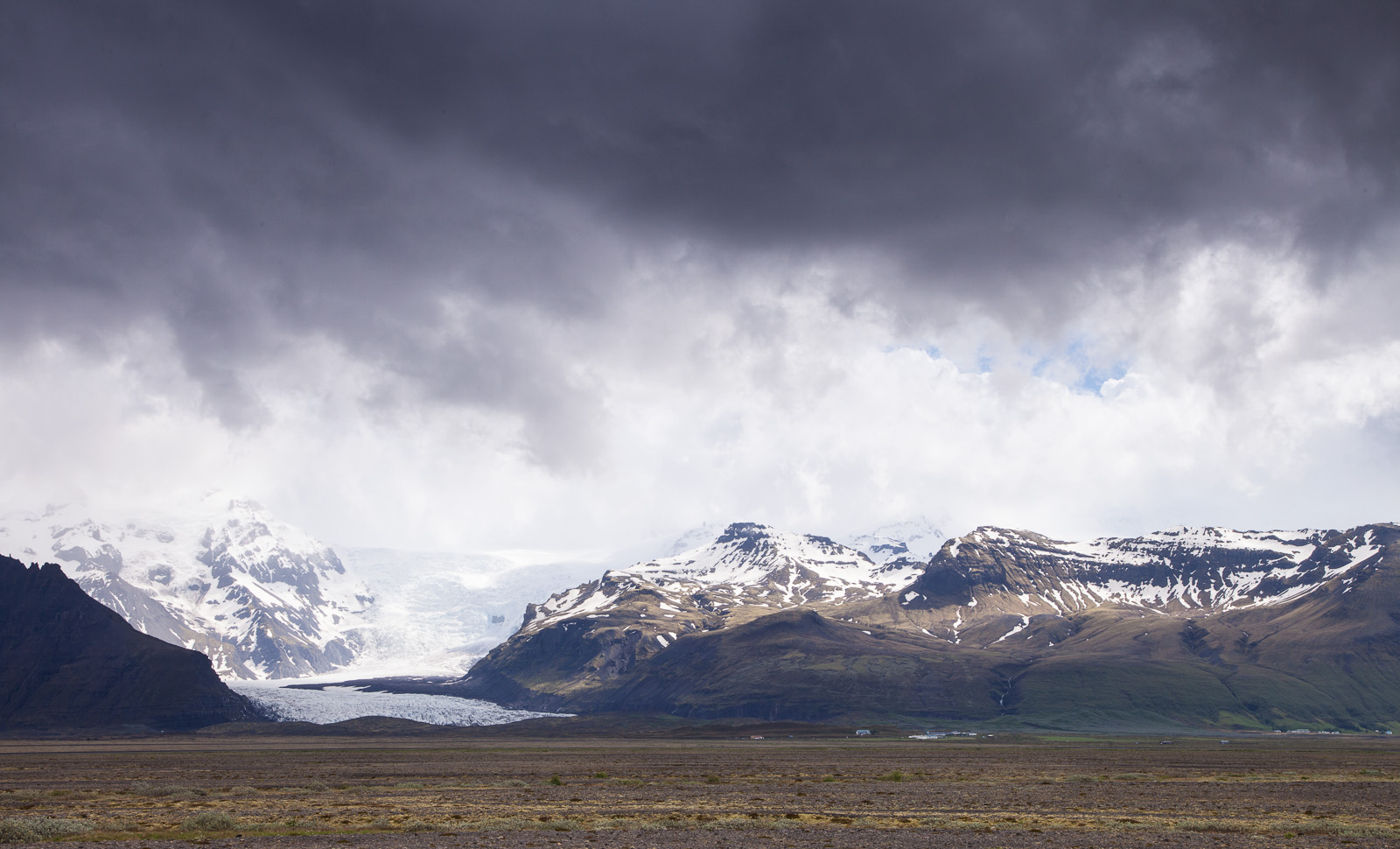 Getting Creative With Plastic: ND Filters

Holiday season is upon us once again and it’s time to capture some of those memories for sharing with friends and family. But, as good as camera phones are becoming, there comes a point where you realise that, no matter how many editing features they offer, the images they take are not matching up to the ones in the advertising brochures that likely enticed you to the holiday destination in the first place. So, how do you take photographs like the pros?

(At this point in the original draft I wrote paragraphs about creative vision, experience and a whole bunch of other stuff that I arguably know nothing about. But then I realised that it wasn’t really necessary to the point I want to make, so let’s just assume that you’ve managed to find a scene that you want to shoot in a creative way.)

With photography, creativity usually crops up twice. The first time is when framing the shot – the decision as to what to include, what to remove, what depth-of-field and the like. The second time is in the creative control of the available light and even a pro relies on one thing: good light. Without good light, even the most experienced photographer will struggle to produce a good image.

So, to the point of this article: A couple of easy tricks to control light and make photographs a bit more interesting – and certainly a bit more like the ones in the brochure.

After travelling along the southern coast of Iceland for a couple of weeks in a variety of weather conditions shooting landscapes, I came to rely on one piece of equipment so much so that I would consider it an essential item. In many, many cases it turned a ‘reject’ into a ‘keeper’ and turned a ‘ho-hum’ into a ‘wow’. What is this magical piece of equipment? Why, it is the humble filter.

The clue as to the purpose of a filter is really in the name: To filter. In the case of photography there is only one commodity that can be filtered and that is the light entering through the lens and, perhaps obviously, a filter can only modify or remove light, never add. But, as light is the fundamental component in photography, why would we actively seek to reduce it?

If you’re new to photography a simple analogy is probably going to make the rest of this article easier. From the technical perspective, a good photograph usually starts with getting just the right amount of light into the camera and onto the camera sensor, a process resulting in what is usually (but perhaps not accurately) called “a correct exposure”. Too much light and the result is that ‘washed out’ look (over exposure) and too little light results in that ‘taken at night’ look (under exposure). It’s like filling a bucket with water; too much and it overflows, too little and there’s not enough to go around. You have to fill the bucket to the brim, no more and no less.

Plenty of web sites out there use the bucket analogy to discuss exposure in a far better way than I can here, so I’m not going reinvent the wheel. Suffice it to say that there are three, inter-dependent, settings that you can use to control how this bucket is filled and which one you use depends upon the creative look you are after – shutter speed, aperture and ISO (film) speed. Again many articles exist that discuss these, and I may one day write my own.

But sometimes, you need some additional help to realise your creative vision. For me, it was the neutral density filter.

One of the most useful filters – especially in landscape photography – is the neutral density, or ND filter. Its purpose is to limit the amount of light passing through it in equal amounts across the colour spectrum or, put another way, it limits the light passing through without changing the colour of that light. Using the bucket analogy above, the effect of an ND filter can be looked at in either of two ways:

An offshoot of the ND filter – and one far more frequently used – is the ND graduated filter, or ND Grad. It is basically an ND filter that only limits the light on part of the filter. 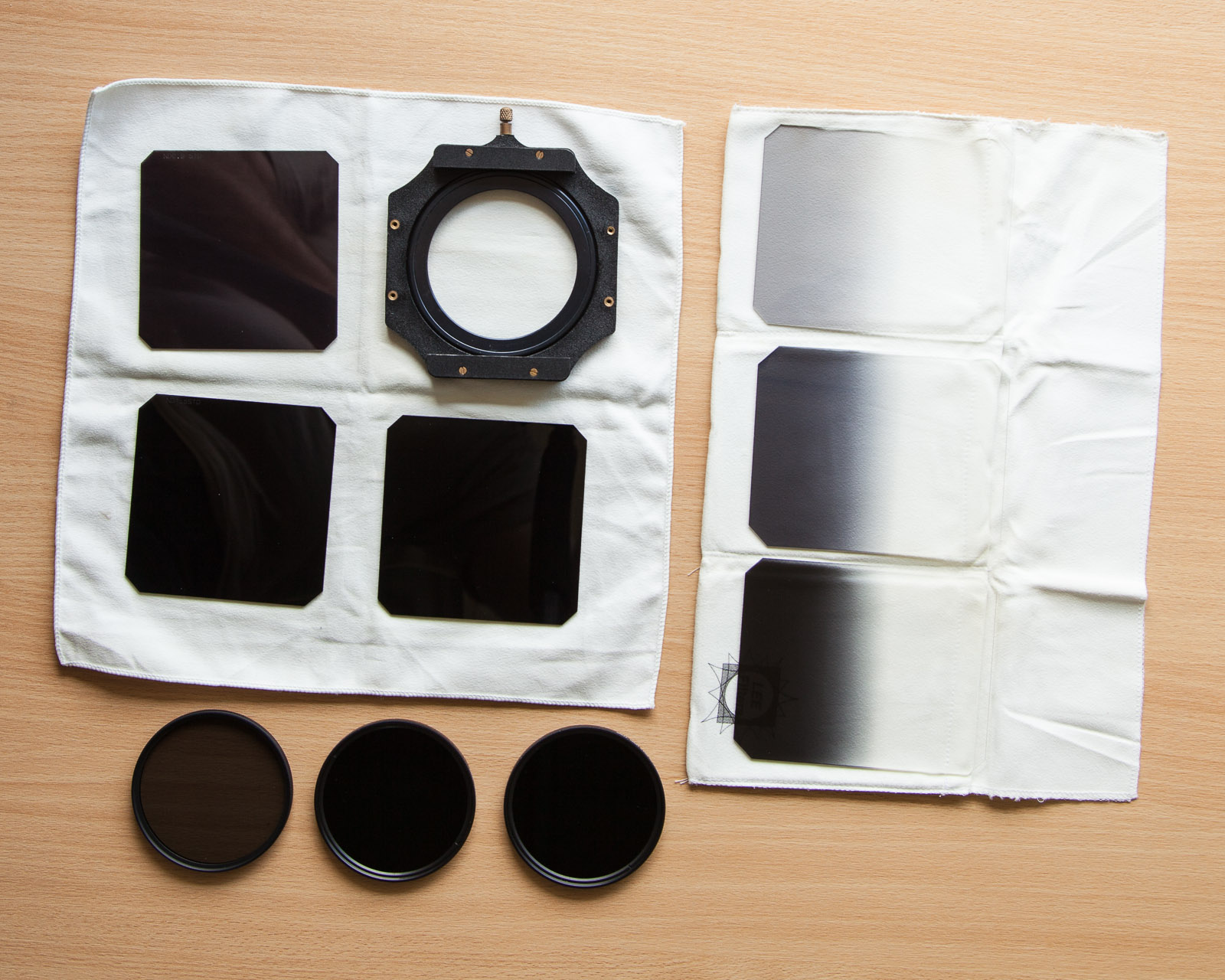 Little bits of plastic – here the ND and the ND Grad filters – can make a world of difference to the ‘look’ of the photograph.

On the left we have the ND filters. It may be difficult to tell but each of the three square and round ones are different levels of opaqueness – the more opaque, the longer the exposure time – the most extreme limited the light passing though to a one thousandth of the original light. On the right we have some rectangular ND Grads, again each limiting the amount of light arriving on the part of the camera sensor.

So yes, this magical device is basically a piece of plastic. Already I sense disappointment. But, some examples may help…

Take a look at the following shot: 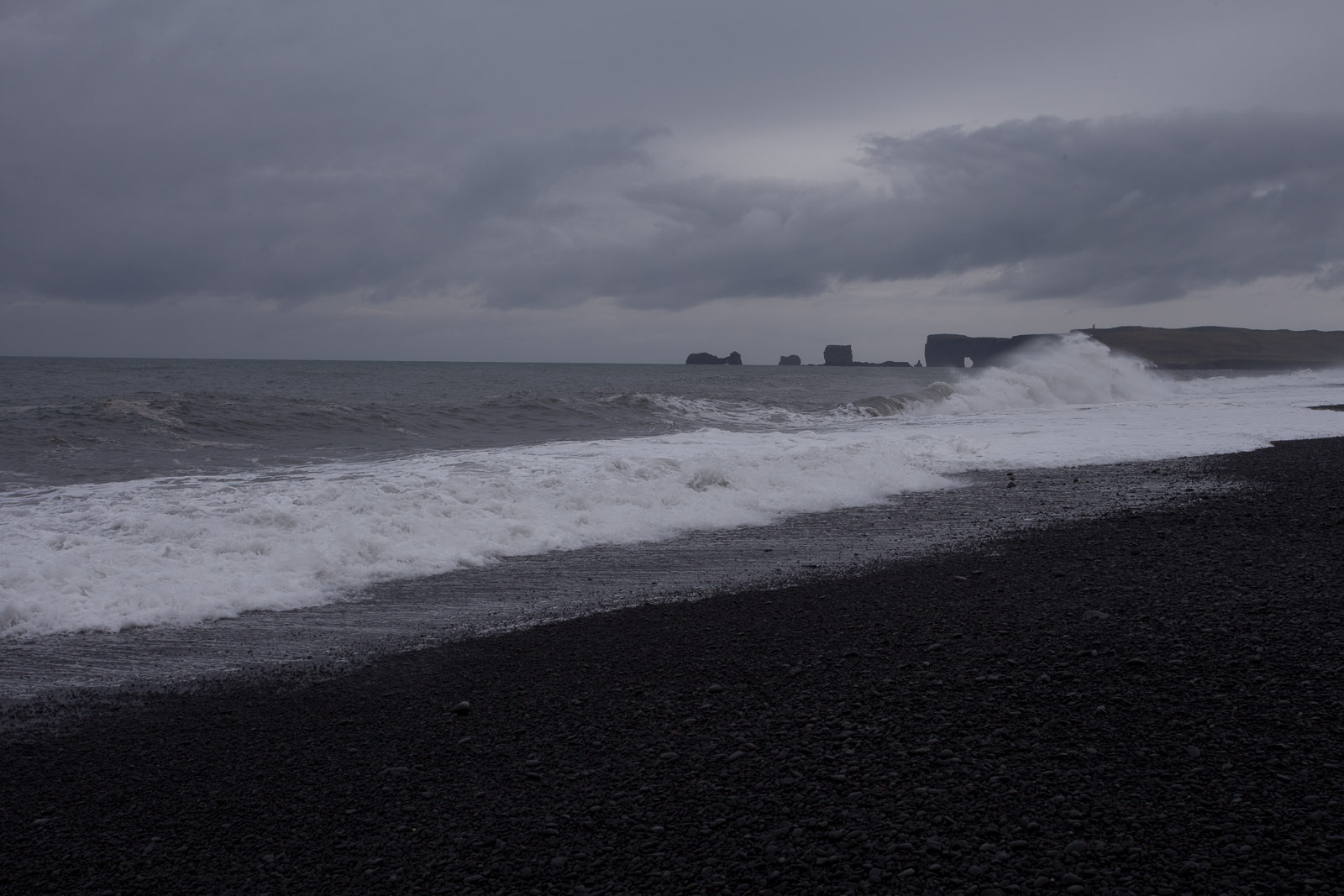 It’s a beach shot with a nice, black volcanic beach and the Atlantic Ocean. What I wanted to show was not the detail of the waves crashing against the shore, but the contrast of white sea against the black beach and, unfortunately, try as I might, I could not make the exposure time long enough to turn the sea into a white cotton wool coating. The slowest I could achieve was 1/45secs which, as you can see, kind of works, but there’s still too much details in the waves. If only I could limit the amount of light entering the camera so that I needed a longer exposure time to fill the bucket.

Here’s the same landscape with an ND filter attached: 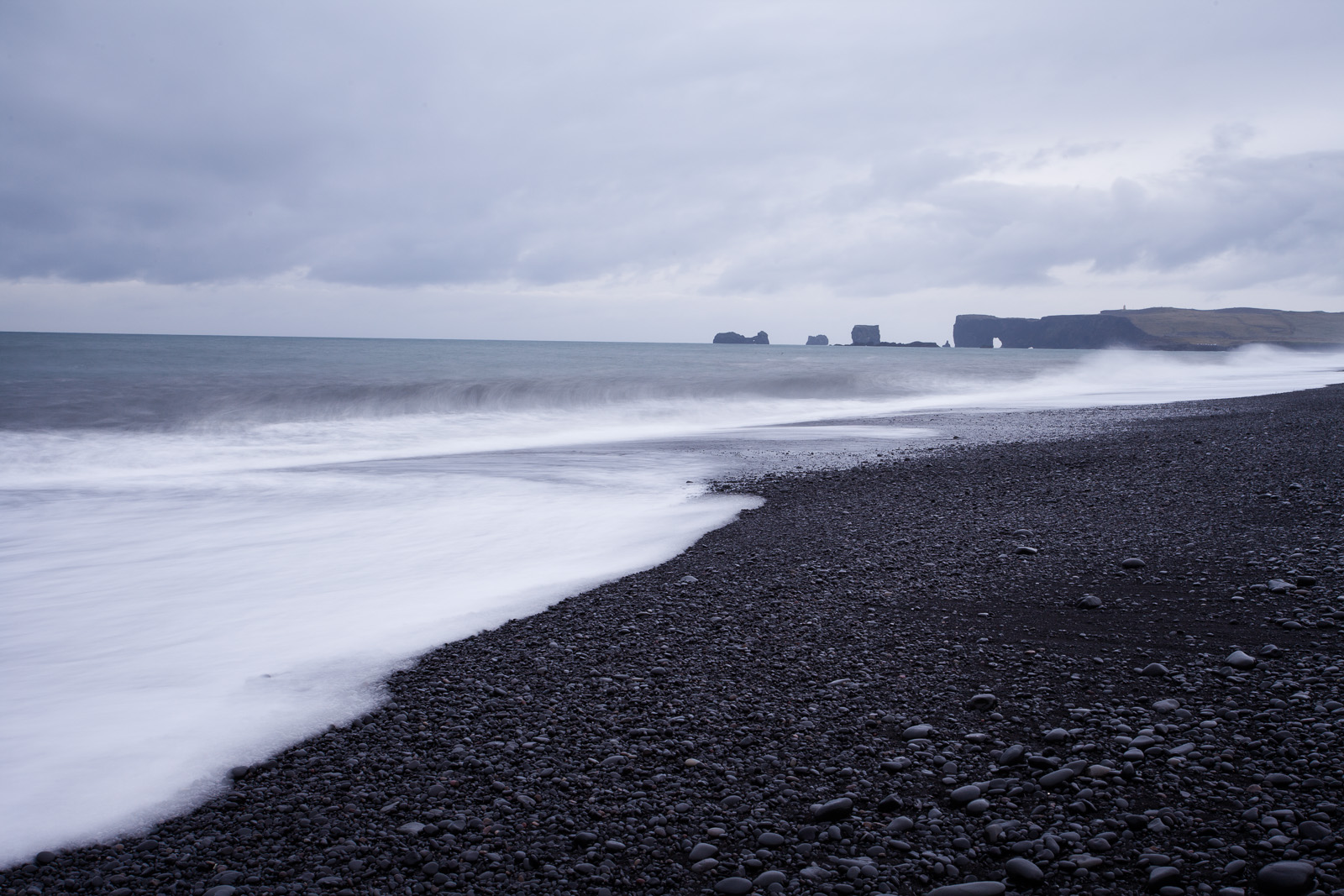 This is much closer to the feel I was after, but notice that the exposure time is now a whole 3secs.

For the majority of the two weeks I spent travelling along the coast it was overcast or raining, usually both. It was that kind of light-grey overcast that photographers hate as it invariably ends up as a white featureless sky when exposing correctly for the subject. If you expose for the sky to get some detail back, then the foreground usually ends up as a silhouette, and trying to expose for both just ends up with a flat-looking images.

Here’s an example of the camera selecting the ‘correct’ exposure. 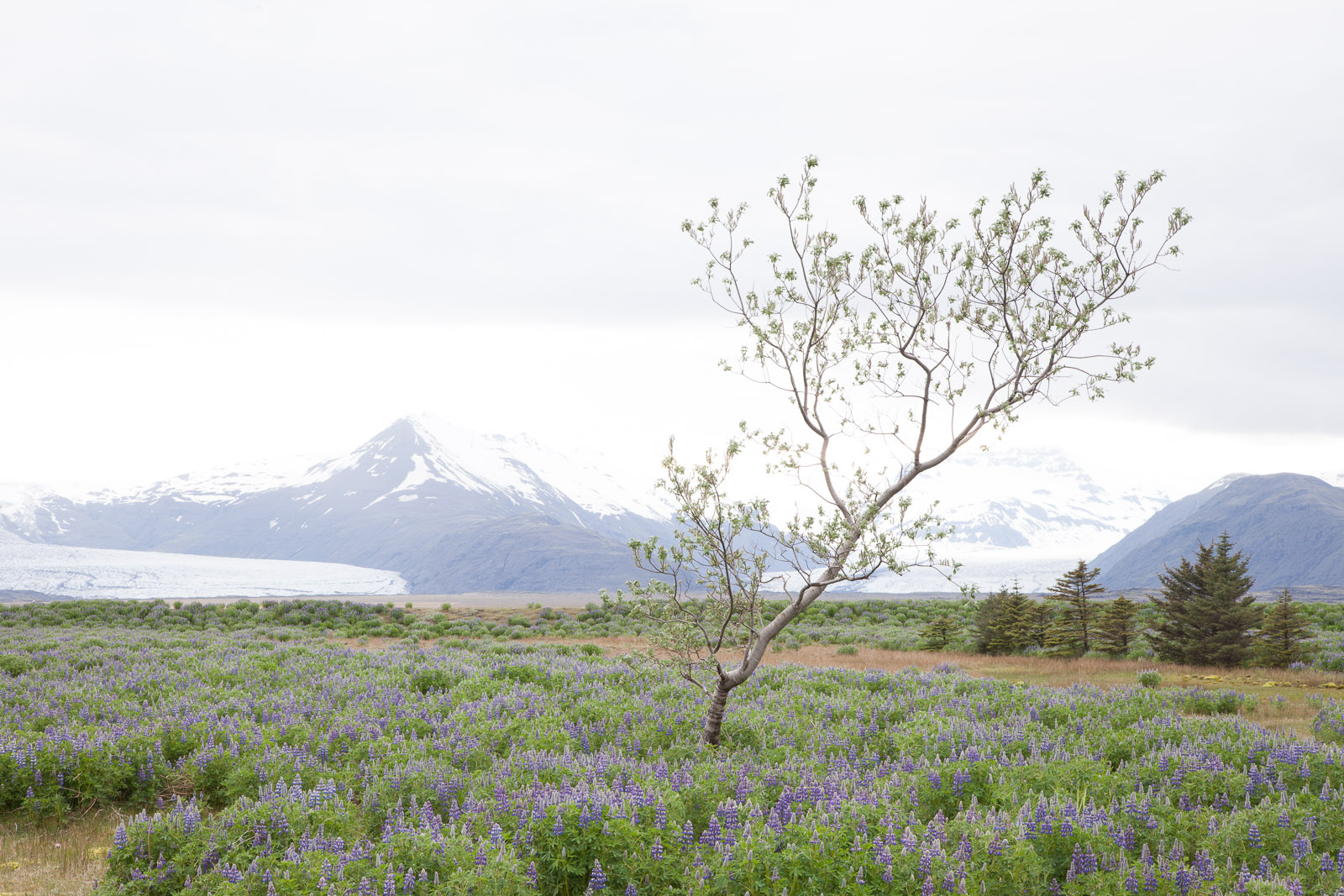 As you can see, the sky is a featureless grey-white and the tops of the snow-capped mountains disappear into that whiteness. In addition, the glacial tongues are a blob of white with no detail. The rest of the shot, however, is reasonably exposed – not too dark nor light. If only I could reduce the light in the sky part of the shot, but keep the landscape unchanged. This is precisely the job of the ND grad. 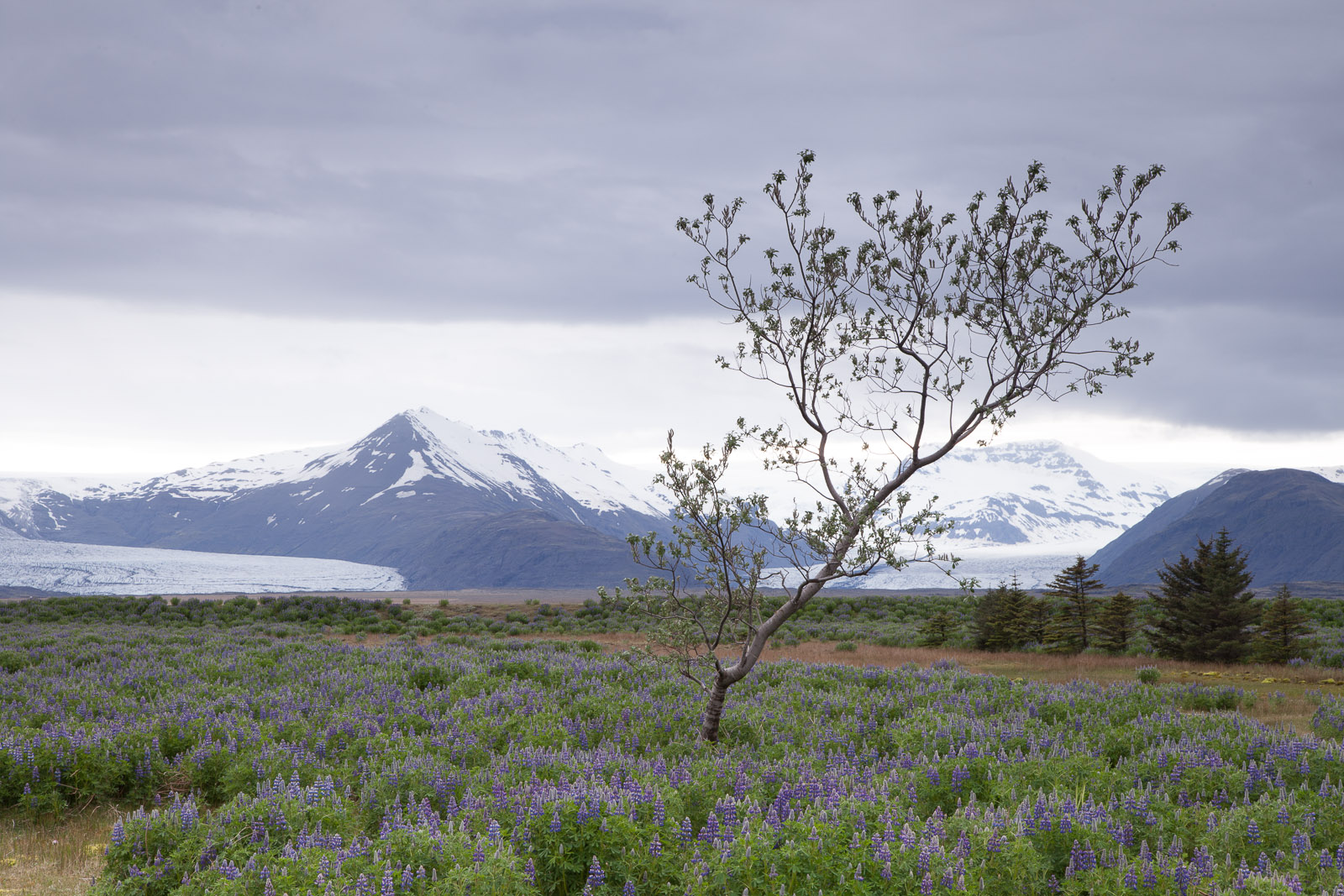 Already you can see the detail come back into the sky and the peaks of the mountains have become distinct from the sky. I’ve also been able to slow the shutter speed down a little bit, allowing more light into the exposure so the foreground is better illuminated.

Here’s the final image after a bit of careful positioning of the filter, and a spot of clarity and saturation adjustment in Adobe Lightroom. For me it has the right level of detail in the clouds, the glacial tongues, the ridges of rocks in the sides of the mountains and the lupins. 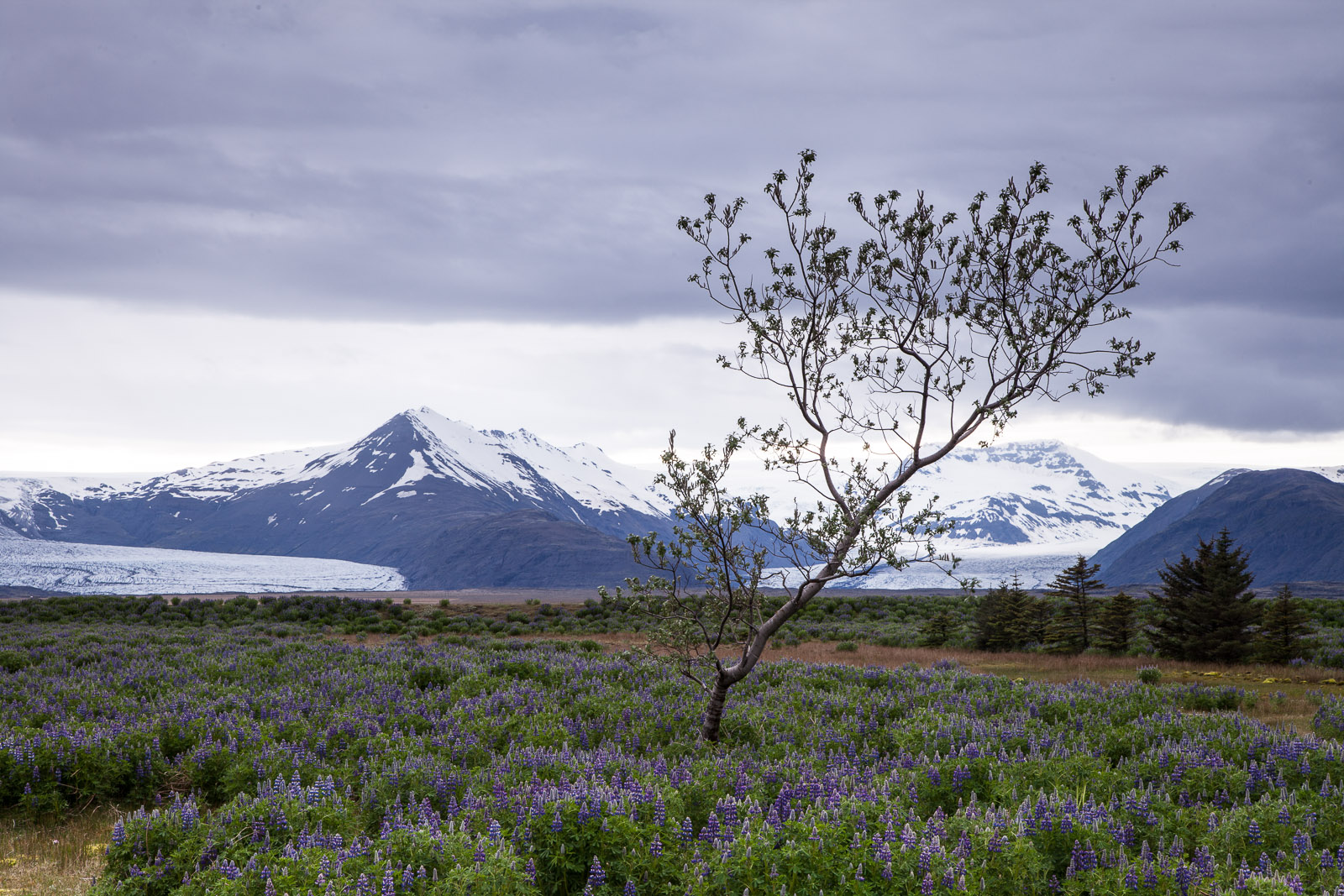 So, a bit of a long article but one I hope that shows that investing in a set of ND and ND grad filters can really make a difference to the creative feel of the shot. There are cheap ones and, of course, expensive ones. Cheap ones are more likely to alter the colour slightly as light passes though them, which isn’t great, but if you’re starting out and don’t want to invest too much then they can be a great place to start. Over the next few days I’ll post some more shots using my new plastic friends…