A Reminder to Myself

My sister and her husband are keen cooks and I’m sure there isn’t a cook book or kitchen utensil yet invented that they do not own – a fact that has made Christmas shopping for them more difficult as each year passes. So this year I’ve tried a different approach and agreed to take three photographs related to food. It’s a lot more personal and, well, seeing my work hanging on someone else’s walls is always nice. The problem is that it is a new field of photography for me.

So far I’ve had a couple of none-too-successful attempts although I have some ideas on the look I’m after. But as I was lying there on my sofa waiting for the rain to stop so I could walk over to the supermarket to stock up on more fruit and veg for the project, I found my gaze settling on one of the old plants in the living room that has been in the house as long as I have. 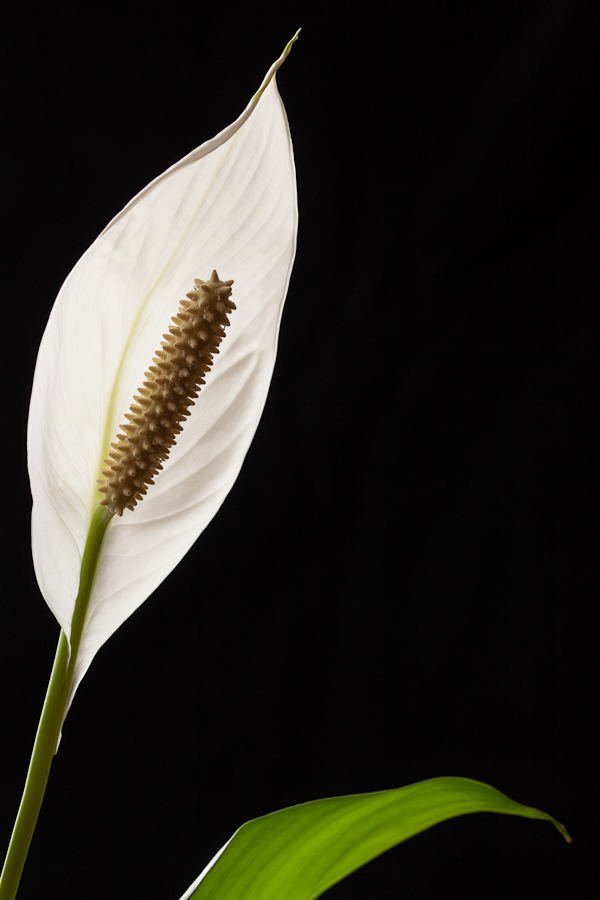 It took about a dozen shots and thirty minutes to end up with this shot. Naturally side lit from the living room window the camera was tripod mounted with a 100mm macro lens. The first few suffered from framing and focus errors – so I moved the camera, stopped down to f/11 and a 4 second exposure. The background was slightly distracting  – a very dark outline of an Ikea Benno CD tower – so I put the camera on a 10 second timer, hit the shutter and rushed round in time to hold up a black velvet backdrop. It didn’t take long to get a shot I was happy with.

There was very little to do in Lightroom: a touch of clarity adjustment, vibrance and tweaked the tone curved to reduce the highlights and bring some details back into the left-hand side of the flower. Then a spot of dodging on the lower leaf to bring back some punch that was lost when tweaking the tone curve.

Of course, it doesn’t move me closer to capturing the present for my sister and her husband, but it does remind me that there is always something of beauty to photograph – even when stuck indoors on a dark and rainy winter’s day.