After spending the whole weekend either doing a test pack of my suitcase and camera backpack or assembling the final notes for the fast approaching trip, I had to get away from the computer and out of the house. So I found myself in Micheldever Woods, a mere twelve miles from my home.

I decided on the woods as it is regarded as one of the best bluebell woodlands in Europe and after missing the season completely last year I promised myself to come back this year. I still missed it by a couple of weeks – mainly due to work pressures – but it was still certainly impressive. 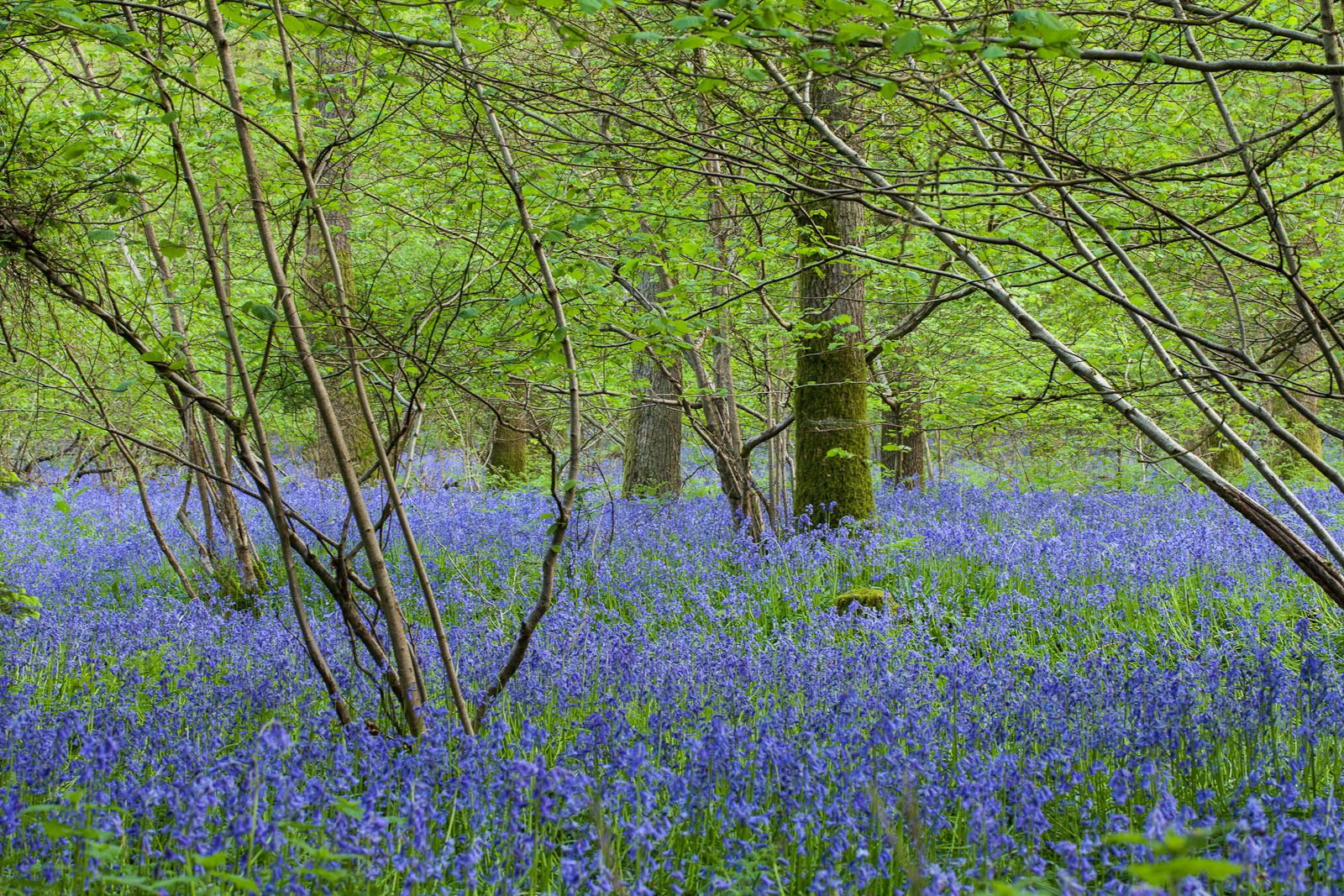 Deeper into the woods the bluebell carpet is still impressive…

I was also traveling light and was using my 100mm macro lens, mainly as I was still in the middle of test-packing my camera gear and the 100mm macro was one lens I was not taking to Iceland so conveniently to hand. I say ‘was not taking’ as it really is a fun lens and, in all my research on Iceland, I haven’t seen many macro shots. 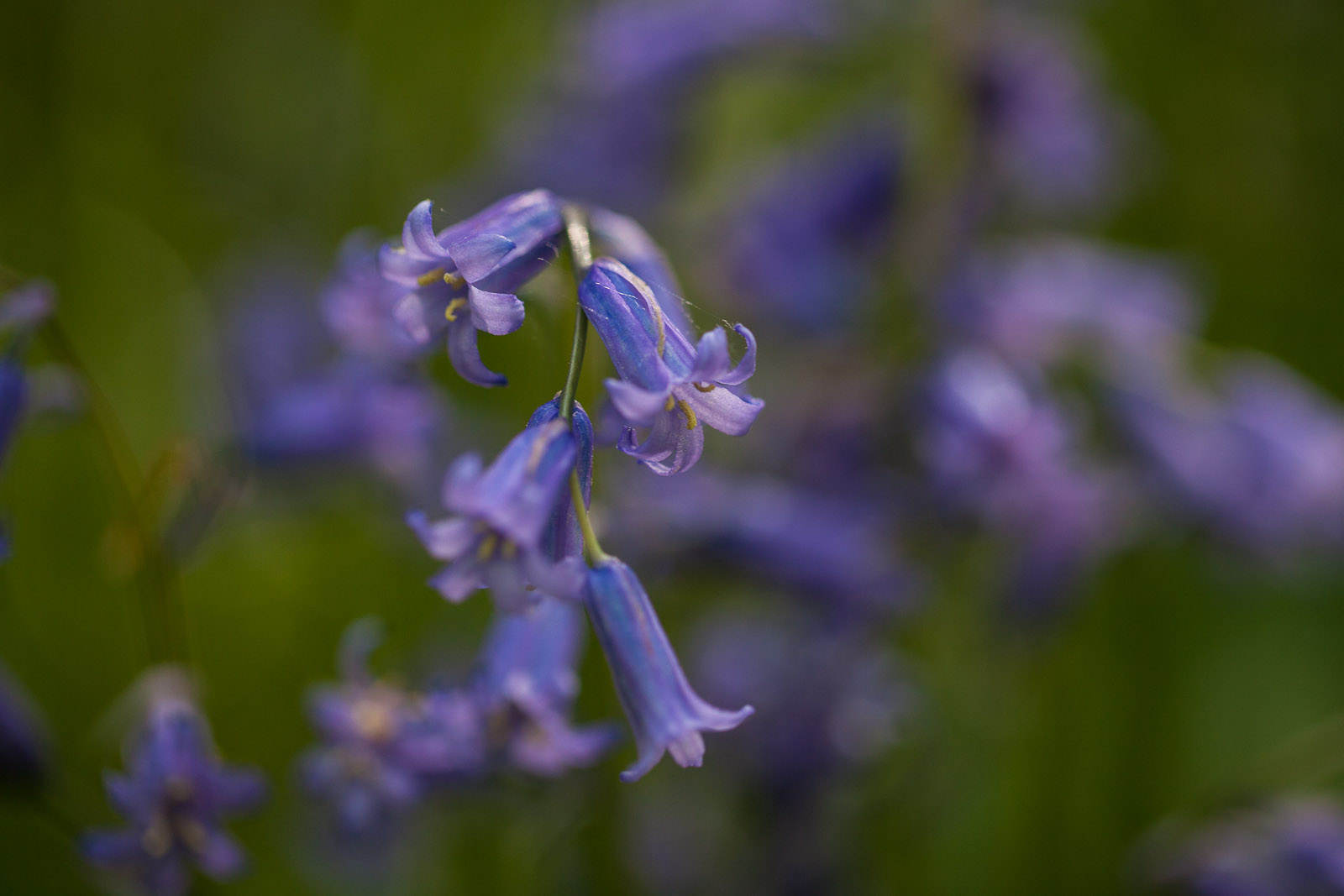 The 100mm macro lens is always a fun lens to use…

One of the benefits of being there by myself – and at 6PM on a Sunday evening there really was virtually no-one else there – meant that, aside from being alone with my thoughts, I was making very little noise. As a result the local wildlife didn’t hear me until I much closer than I’d usually be able to get. 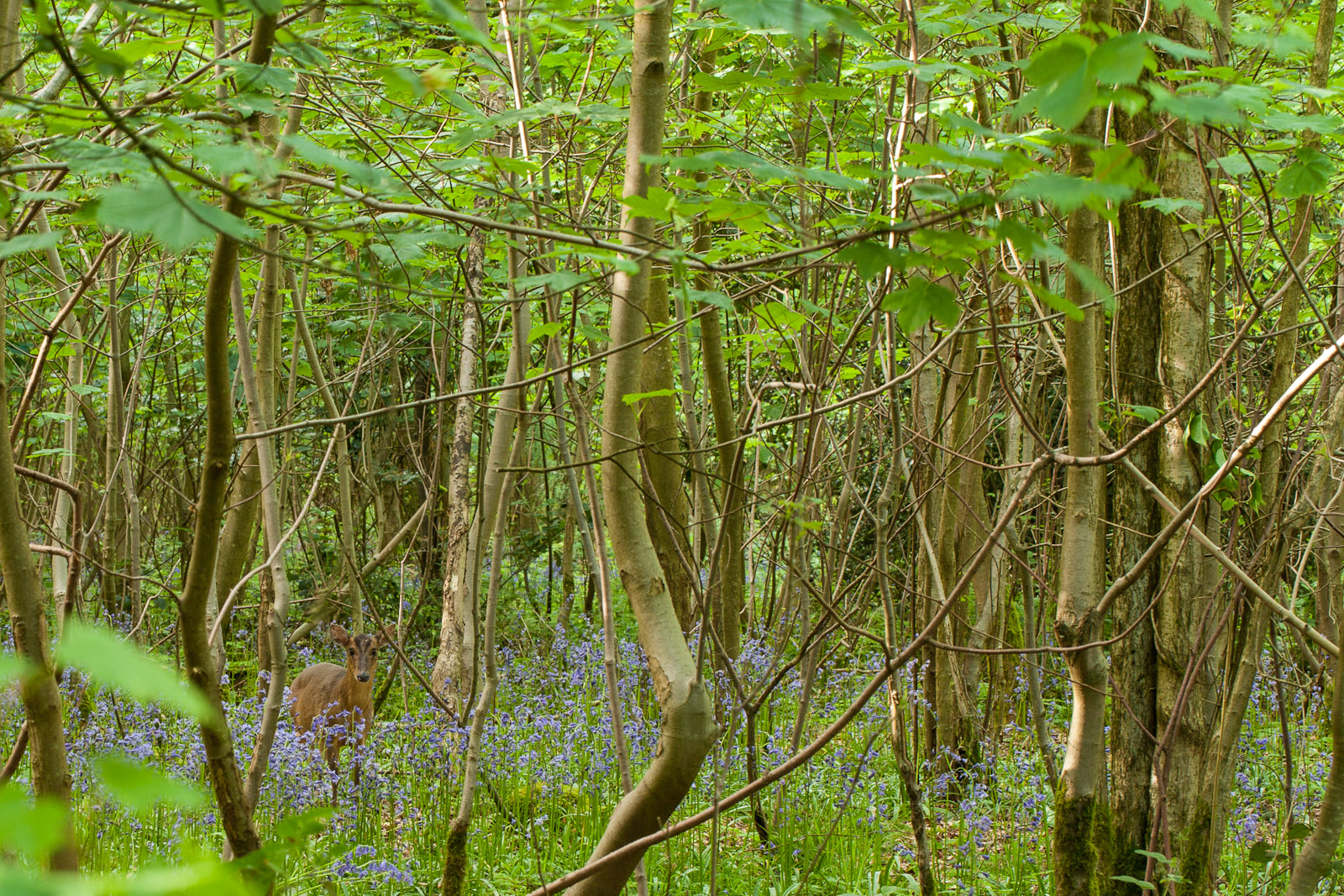 I may have missed the height of the bluebell season, but I did get to meet the locals…

I’m usually so focussed upon travelling abroad that I often don’t take time to enjoy the things on my doorstep. The hour and a half in Micheldever Woods has reminded me that I should pay a bit more attention to the wonderful surroundings much closer to home.

It is a long weekend here in the UK but there’s no rest for the wicked and I’ve been working yesterday and today leaving just Monday for me to cram in all the usual household tasks and start wrapping up the preparation for the trip.

One of the monumental decisions is that I’m not going to be using satnav whilst driving around Iceland. That probably doesn’t seem like a life changing event, but given that I pretty much need satnav to get to the end of my street, the thought of driving across a foreign country for the first time without some reassuring “In two hundred yards turn left.” to guide me may likely end up in some kind of therapy being required. 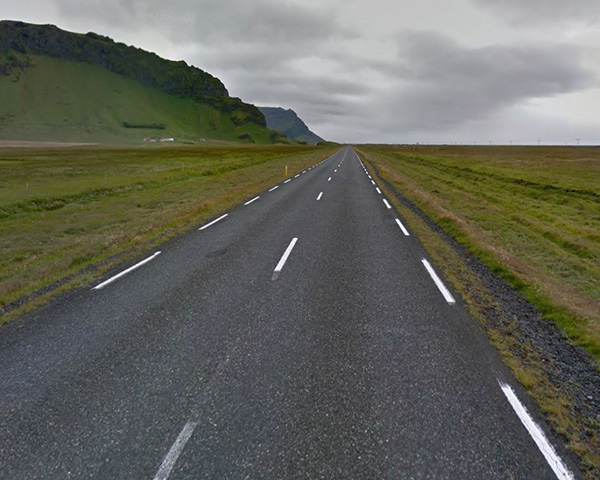 Route 1 is the main ‘getting from A to B’ road. As Google Maps shows it is easy to see why there is no Icelandic translation for ‘rush hour’.

That being said, other than Reykjavik itself, you would struggle to call Iceland’s road network complex. Look at a map and you would be forgiven for thinking that the map designer had decided to include a couple of major roads and not bother with the rest. But no, that is pretty much the road network. Other than the ovoid route 1 that roughly travels the coastline of the island, there are two types of road you’ll find. The first type is similar to route 1 – a tarmac two-lane road – that usually acts as a spur off route 1 whilst the second type are the highland, or ‘F’ roads which are essentially gravel, or compacted crushed rock. As most of us travelling to Iceland will be hiring a car the rule is simple: Unless you have a 4WD it is best to view F roads with caution. Not only will they not be forgiving on the suspension, most hire companies have a hefty penalty for paintwork chips – a risk greatly increased by the loose surface of F roads. Their uneven surface will require higher clearance too, even more so as crossing fords is a common event on these roads. Ever since I killed a BMW 3 series when attempting to pass through a ford here in the UK – and subsequently earned the title ‘U-boat commander’ – I have always been wary of driving through anything deeper than a puddle.

As my trip is confined to the southwestern corner of Iceland, and I’ve no plans to venture significantly inland into the highlands, I only have to concern myself with a dozen or so roads and, where I do have to travel on F roads, it’s really only before they become ‘interesting’. No, as much as I would like to think of this journey as being worthy of Ranulph Fiennes, The driving won’t exactly be something legends are made of.

Still, I know myself and I know my sense of direction. So I am somewhat comforted by the purchase of the Ferdakort 1:250,000 touring maps. I’ve long had a thing about maps (even briefly referring to my study as the ‘Map Room’) and the maps from Ferdakort are really very nice – certainly as good as OS maps here in the UK. But, what I particularly like is that the Ferdakort maps include a few nice touches for those travelling the country. 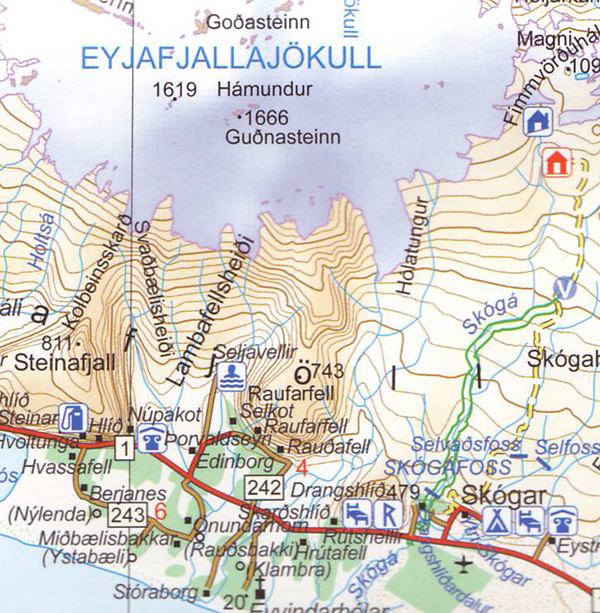 Ferdakort touring maps have some handy extras for visitors to Iceland – the location of petrol stations for one thing.

For a start they include the location of petrol stations which, in a country consisting of sporadic population centres separated by vast tracts of wilderness, is a pretty handy feature. And, as petrol stations usually have a convenience store as well, you also know where to stock up on food. They also include the locations of many hotels and guesthouses – again a nice feature when trying to work out how to get to your accommodation. And F roads are clearly marked as broken lines and where crossing a ford will be required this is clearly shown with a nice big ‘V’.

So, my plan for tomorrow is to take all the points of interest that I have marked on Google Maps and transcribe them on to my lovely Ferdakort maps as accurately as possible. Then I can plan the routes I’ll need to follow and approximate times, which may sound a bit like overkill but remember a lot of the shots will be time-of-day dependent to get the right mood so minimising mistakes in directions will be useful.

But maybe I should take my satnav anyway. Not to use, you understand, but just in case I need to hear a reassuring “Turn left” every so often…

Things have been quiet around here the past week or so mainly due to the fact that the majority of the core decisions were made some time ago, leaving me with worryingly little to do. That said, with 21 days to go, it is now time for the customary mad rush to get all the last-minute tasks completed.

That’s not to say I haven’t been continuing to plan the trip. In fact, after my last post about how much planning is required and how it can sometimes seem too much effort, it would appear that I have spent yet more hours on Google. And it has been worth it, but more of that later on.

Months ago I mentioned that Evernote plays a key role in any trip planning I undertake. The browser plug-in that allows you to copy all or part of a web page with a single click, combined with what is likely Windows 7 best feature – the snipping tool – means that I can quickly gather all manner of information for later use. But, as much of a geek that I am, I’ve never been too keen on relying on electronics when out in the field – simply because I am usually quite literally a field. So one of the remaining tasks is to distil all 84 Evernote clippings into a printable document. For me this apparent duplication of effort is usually fairly handy as the process forces me to consider how to group shooting locations, the logistics of getting between them and, if nothing more accurate, then at least a vague idea of the time required at each location. It also allows me to remove some of the more impractical ideas that ended up in Evernote as I get a better idea of the final itinerary.

The other tool I’m relying on now is the Reminder app on my phone, tablet and iCloud. Not because it is a particularly wonderful app, but it is always with me on one device or another and synchronises seamlessly. I’ve had an ‘Iceland 2014’ list for some time, but with three weeks to go it is now that it will really get a beating. Right now there are over a dozen outstanding tasks and more are being added as I think of them – usually in the oddest of places.

One of the larger outstanding decisions – and one that has come about from the continued research – is whether to take an entire day out of my time when based in Vik and go on an organised hike. Usually I would much prefer to go exploring by myself but I had this notion of going to see Eyjafjallajökull, simply known to the rest of the World as E-15* and the volcano that erupted in 2010 causing all the havoc. Like most places in Iceland, you could go yourself, but I’m tight on time and so having someone do all the planning seems like a good option. Google, unsurprisingly, came back with countless options but the quirky humour of the Eskimos Iceland website piqued my interest. A few emails later and the notion of getting to the top of E-15 has been replaced by a more general hike, but one that passes across E-15 and includes some other photogenic landscapes. Of course I have checked and there will be lava fields still warm from the eruption and the requisite steaming ground too. It sounds like a great way to see some hard-to-get-to landscapes. The fact that it is described as ‘challenging’ and ‘requiring the use of ropes and cables’ in some places only makes it more appealing.

The decision really is whether I can afford the time. I only five days based in Vik before heading east along the coast but I’m happy that that gives me a bit of slack just in case Iceland’s notoriously unpredictable weather decides to be playful. Taking a day of that to go hiking leaves me no time to reshoot locations should I need to.

*E-15  – E with an unpronounceable combination of 15 letters after it!