This is one of my favourite photographs from Iceland.

I had based myself just outside the village of Vik for six days – which is a convenient stopping point as many areas of interest are within easy driving distance – and so had the opportunity to visit most of the places on my list a couple of times. One place I revisited a number of times was Reynisfjara beach with its view of the striking rock spires of Reynisdrangar.

Reynisfjara doesn’t crop up on many ‘Top Beaches of the World’ lists, although I suspect that is because most lists focus on beaches with golden sands, warm breezes and azure seas gently kissing the sands. There are some absolutely stunning beaches out there that fit these criteria, but in no shape or form can Reynisfjara be considered one of them. The sandy beach is jet black volcanic sand. The breeze is the relentless gust of cold North Atlantic air and the ocean doesn’t so much kiss the beach as beat it.

My goal for the beach was to capture the white surf on the black sands and the spires of Reynisdrangar were going to form an interesting backdrop. As a shot it looks good too but once I had captured the image in my head it felt a little, well, incomplete.

Being close it is to route 1 and having an accessible car park right next to it makes it a popular beach. Coach parties make regular stops here and so, as was to be my rhythm whilst in Iceland, I had to shoot in the gaps between one coach party leaving and the next arriving. Of course, independent travellers were there too and this couple caught my eye. Most people were turning up, walking along the beach long enough for the chill wind to suck the heat out of them and then beat a hasty retreat to their cars. But not this couple. They, well, stayed.

Somehow the moment I saw them I had an idea for a shot; silhouettes of them against the milky white of the sea. But there were problems. First the shot would only work if it were just the two of them, so the shot had to be taken between coach parties and other visitors who would get in the frame. Second, the silhouette would only work if they were contrasted against the sea – a dark silhouette on a black ash beach doesn’t really work, after all. And third, for the water to be a milky white, I had to take a long exposure, during which they couldn’t move.

It took 20 or 30 shots and well over an hour to finally get the image I was happy with and, unsurprisingly, in that hour they realised that they were being, err, photo-stalked. So we got talking and I discovered that they were a young couple from Singapore who were travelling around Iceland. I apologised but explained that they had just helped make the photograph I was after and luckily when I showed them the shot they liked it too. 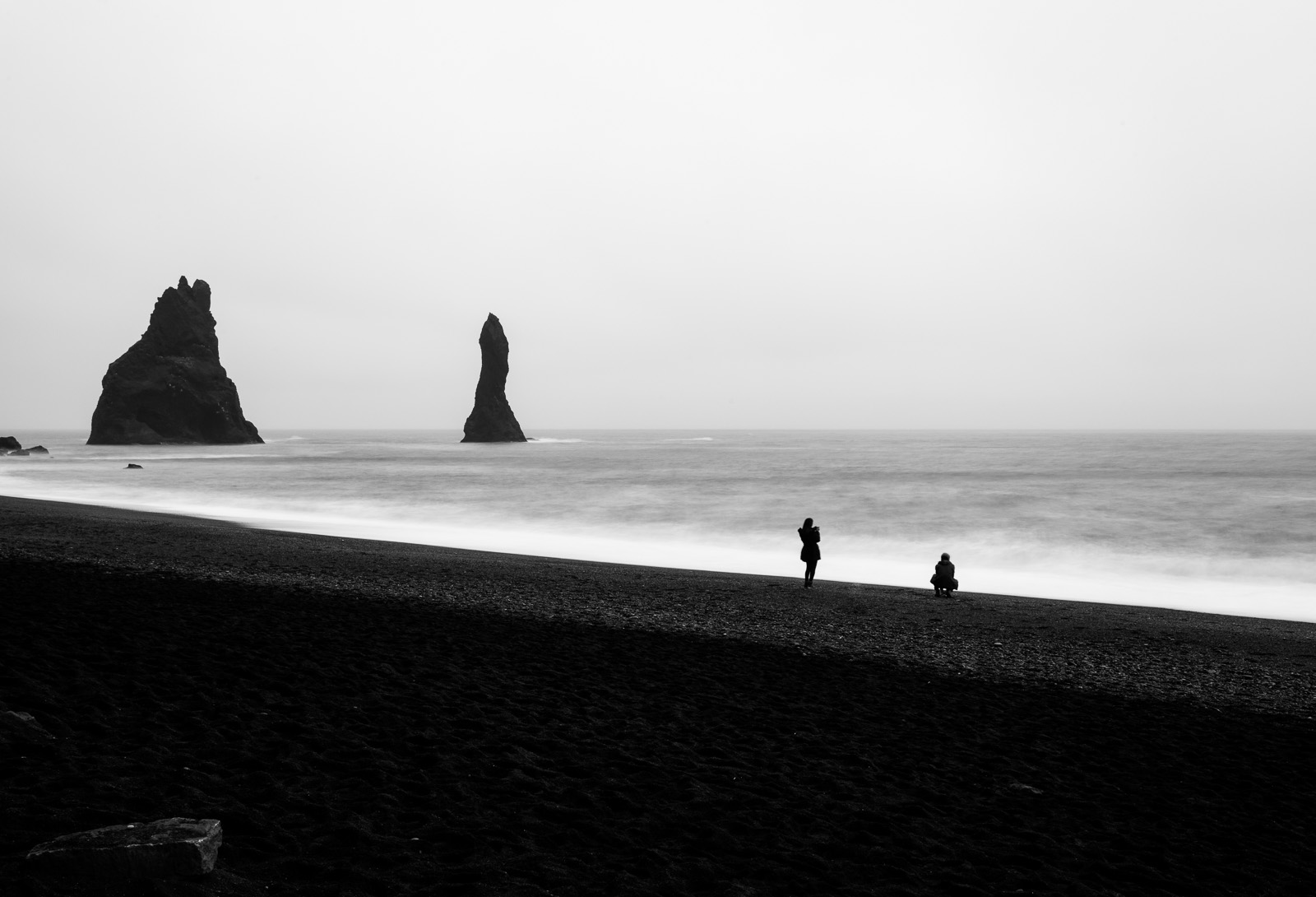 For me this image has a couple of attractions. The first is the simplicity. As I have developed I have begun to discover my ‘style’ of photography. I favour the images where there is a bare minimum of distraction – the kind of photograph where, if just one more thing were to be removed, then the whole image would lose meaning. I think the artistic turn of phrase would be “the use of negative space to draw the viewer’s attention to the subject”. Some people don’t like negative space , some do, but I find that the photographs that I keep coming back to – that I continue to enjoy looking at, follow this minimalist approach.

The second thing I like is the silhouette of the couple. As mentioned in a previous post (http://davehoggan.com/finding-tel-avivs-heart/) when you can’t distinguish people’s features, they become less an individual and more a representation of people in general; they could even be you. I also liked the fact that, when they stood still long enough for the six second exposure, it was pretty much exactly where I wanted them to be – on the right of the frame.

This entry was posted in Landscape and tagged Europe, Iceland, Landscape, silhouette.