A lone 4WD rushes to the only structure in the area – a stone-built refuge – at sunset as darkness spreads across the land. At an altitude of 4,300 metres on the Bolivian altiplano nightfall means -15°C temperatures. 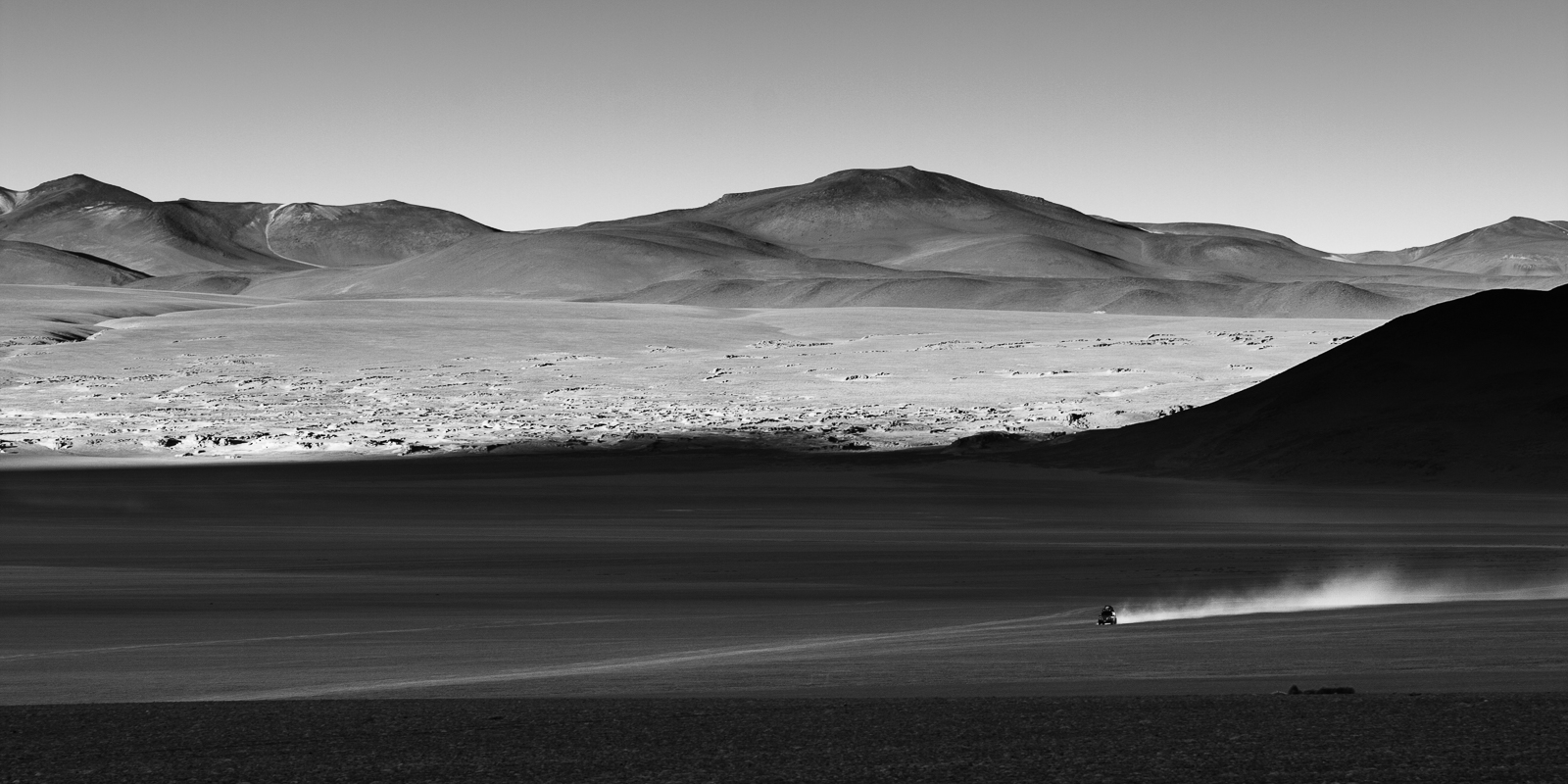 The Day I Realised That I Would Outlive the World.

In a recent post on Facebook announcing my beginning to plan the 2015 photography expedition to Erta Ale, a friend replied and questioned, somewhat jokingly (at least I think it was jokingly) as to whether my shift away from architectural photography to landscape photography was the result of an early midlife crisis. I can categorically state that this is not the case, based on three facts. And here they are…

First, any midlife crisis I suffer now would not be an early one.

Second, I think I already had my midlife crisis when I was around 27, which at least got that out of the way, although it wasn’t a particularly impressive one as, like most 27 year-olds, there isn’t much at that age to have a crisis about. It was probably more a long sulk than an actual crisis.

Third, and the real reason for my shift to landscapes can, very definitely, be attributed to one particular experience in 2010 when I visited a place that is probably the most strikingly beautiful place I have ever seen. That place is Southwest Bolivia.

Now, the whole of southwest Bolivia is stunning and a single post wouldn’t really do it justice, so this time I want to reminisce about one particular part: The Salar de Uyuni. 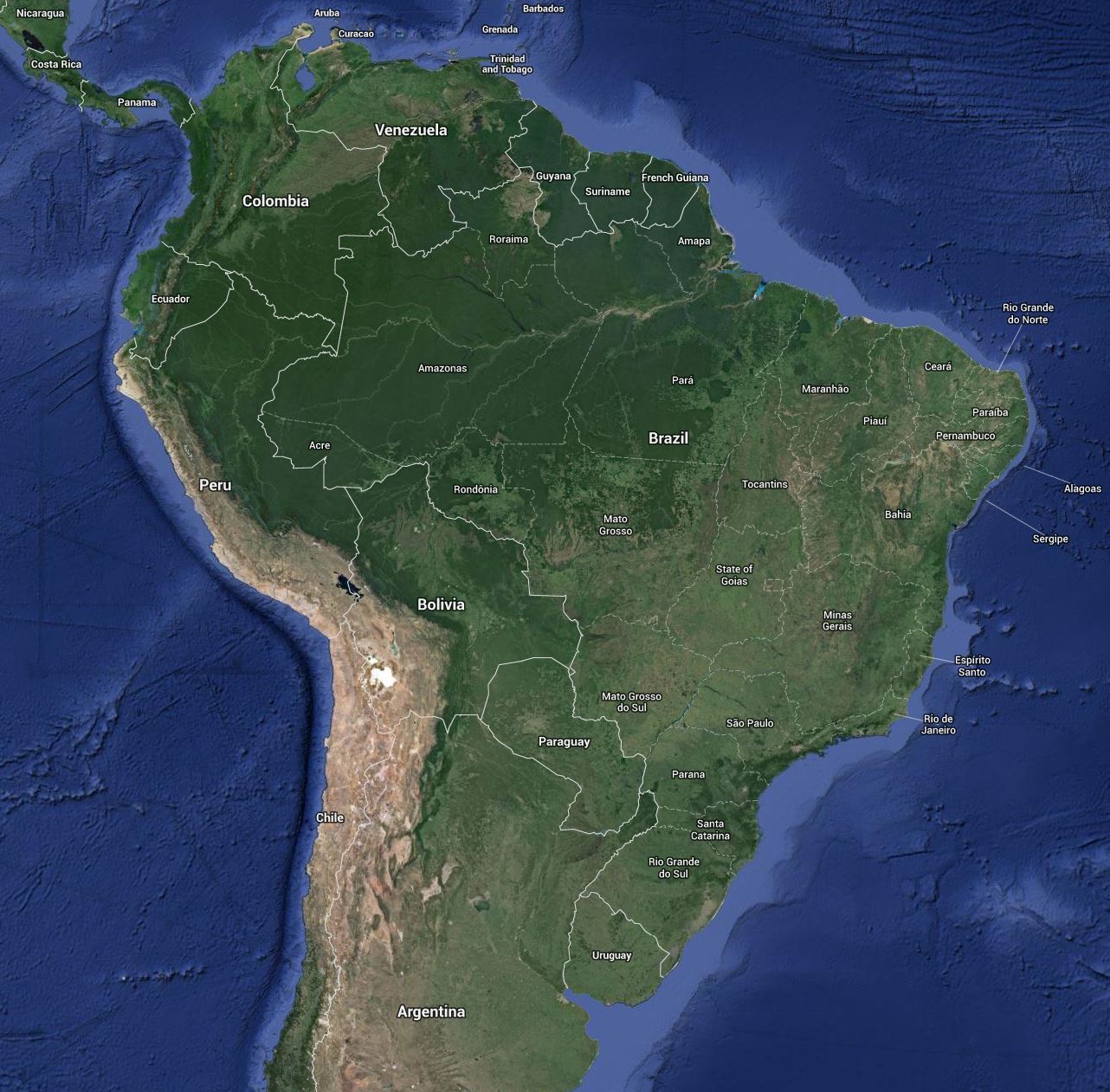 The Salar de Uyuni is hard to miss – you can even see it from the moon. (Hint: Not that you need help but it is the white bit!)

There is an urban myth about being able to see the Great Wall of China from space, but when Neil Armstrong and Buzz Aldrin set foot on the moon for the first time in 1969 they definitely spotted the Salar de Uyuni, apparently mistaking it for a glacier.

For anything to be seen, unaided, from the moon it has to be big. And at 4,100 square miles (10,500 square km) the salar certainly is big. Neil and Buzz can be forgiven for thinking that it was a glacier as there aren’t really many alternatives for geologic features that are pure white. But there is one: Salt. The Salar de Uyuni is not only the World’s largest salt flats, but at an altitude of 3,650 metres it is the highest too. The salar’s existence can be traced back to the very formation of the Andes when the Nazca tectonic plate subducted below the South American continental plate forcing the latter, in places five kilometres skywards. During this (geologically speaking) abrupt process, a vast amount of sea water was scoped up and when the area settled down a rather bizarre sea was created at around 3,650 metres. Over the millennia evaporation has reduced the sea to nothing but its constituent minerals and being nestled in the northern Andes – referred to as the ‘Dry Andes’ being close to the equator – with an monthly rainfall of approximately 1 mm there is little danger of the sea returning. 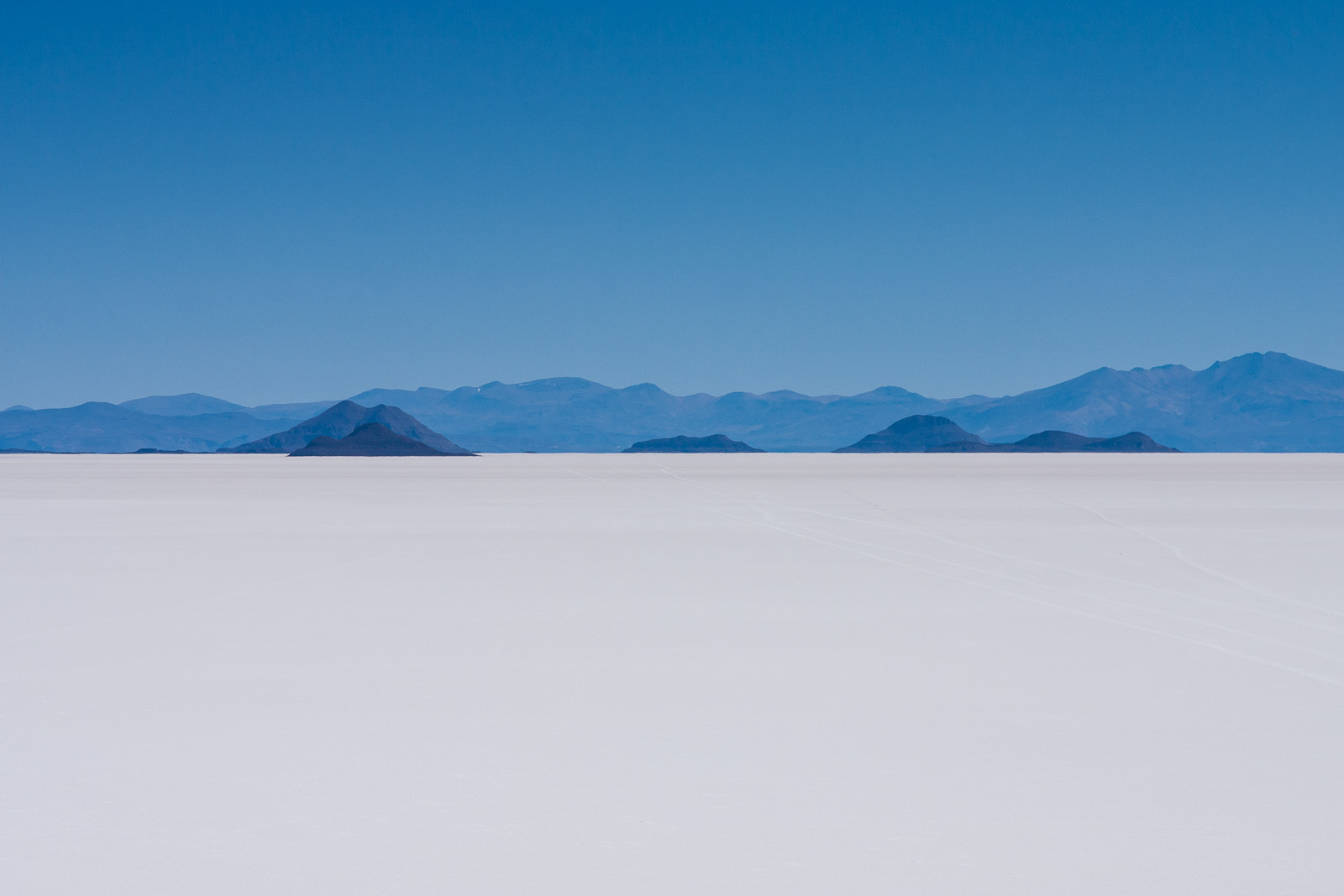 This is what a sea looks like after millennia of evaporation.

Now, the most obvious aspect of the salar is that it is so dazzlingly white although this is perhaps a little unsurprising given that there is an estimated ten billion tonnes of salt contained within. The next thing to notice is that it is also very, very flat. So flat, in fact, that orbiting satellites use the salar to calibrate their altimeters as they pass overhead. The high altitude, near perfectly clear blue skies and high reflectivity of the surface makes the salar an ideal calibration tool. 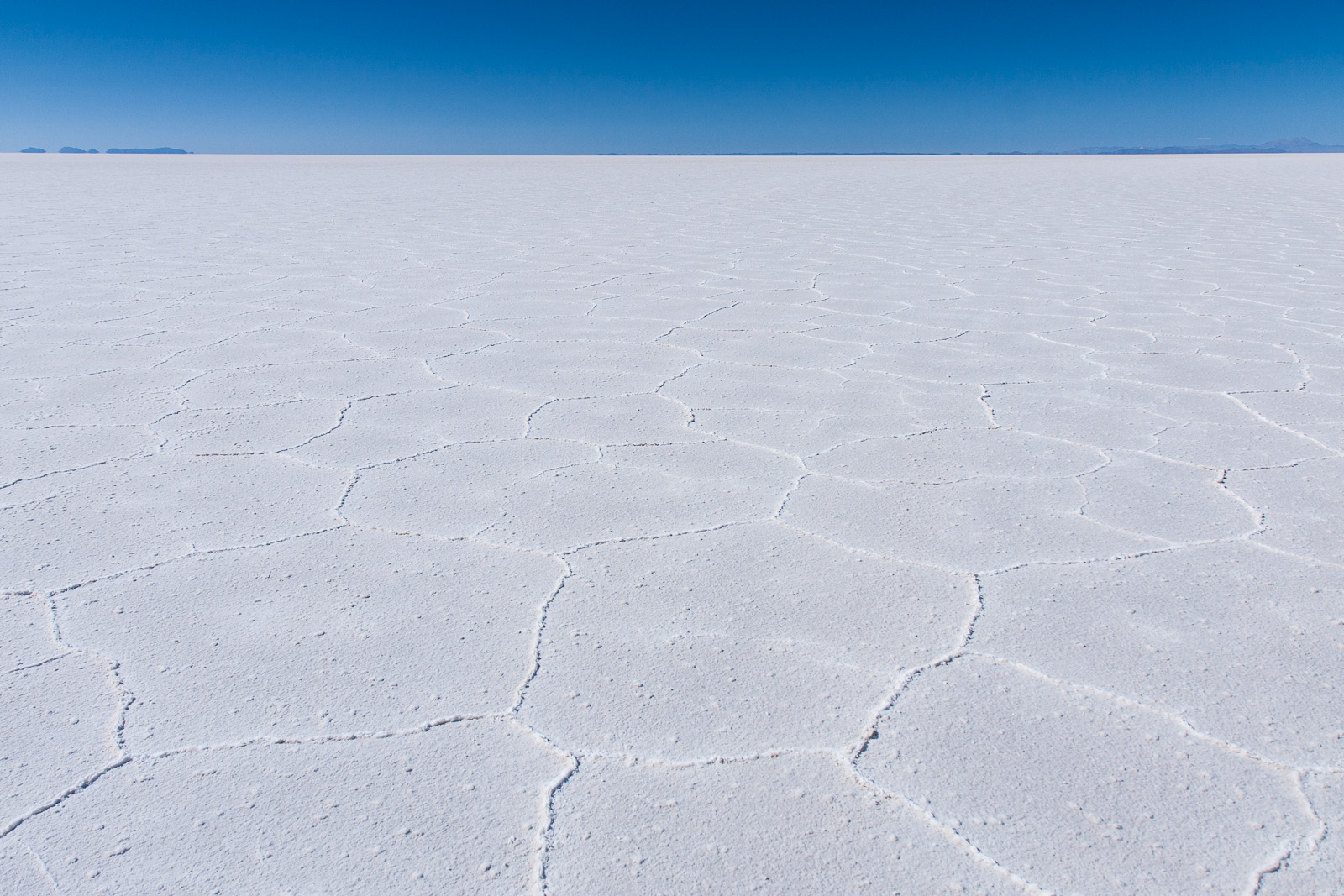 The evaporating waters from the ‘rainy’ season leave a flat surface with a curious pattern.

The reason the salar is so flat is that during the rainy season (‘rainy’ being a relative term in a desert) the rain water dissolves the salt at the surface. When the rain water evaporates, a uniformly flat surface is left, albeit one with a geometric pattern. There is a bunch of science as to why the pattern emerges that I once understood, but has long since been lost…

When researching the salar, it was difficult to find a widely agreed figure for the depth of the salt, but in the end I found the Mineral Corporation of Bolivia’s website. It appears that a 1989 study by a French research institute drilled a borehole down 120 metres while a 2004 study by American Duke University drilled a similar borehole down 214 metres. In both cases they found alternating layers of salt crust and clay – in the latter study a total 170 metres of salt – without touching the bottom of the salar. Of course, it’s not that deep over the entire salar, but even so, it’s impressive. Photographs really do not do justice to the area and to really appreciate the beauty of the salar you have to go and experience it yourself. And that leads me on to the pivotal moment when I changed from architecture to landscape photography.

Bolivia is one of the poorest countries on Earth and one that derives a lot of its income from tourism and a limited mineral and metal export industry. The export industry is limited due to the radical left government’s unwillingness to form trade partnerships with US and European companies. The lack of large scale trade partnerships makes tourism all the more important to the income of your average Bolivian and the salar is a major tourist draw. So, what I learnt next was the catalyst to my change.

Aside from the 10 billion tonnes of salt covering the salar, there is a far more precious element beneath the surface and one that you, and everyone you know, depends on every day. It is an element that has, in the last twenty years, become a globally sought resource and one that, for the foreseeable future will shape your daily existence.

Under all that salt is lithium. The element is found in every single piece of modern portable consumer electronics. Phones, tablets, battery-powered watches, GPS units, laptops and increasingly hybrid and electric vehicles.  Your reliance on any of these is a reliance on the underlying power source. And that, right now, is lithium. The problem for Bolivia and for the salar is that there is an estimated 9 million tonnes of lithium under the surface or, to put that in a global context, approximately 35% of the World’s total lithium deposits, based on the most conservative of estimates.

Now, that doesn’t seem to be so much of a problem. You’re a desperately poor nation, but you just happen to have a significant proportion of one of the most sought after elements in the World as a natural resource. But just like winning a rollover lottery, all this good fortune will come at a price.

The first is political: To date billions of dollars of investment have been offered to the Bolivian government and all offers have been declined. But with the increase in public interest in hybrid and electric vehicles, which require far larger batteries, now seeing the car industry showing interest in lithium the drive to find resources will only see Bolivia under more pressure to develop trade partnerships.

The second is logistical: The lithium is 3,650 metres up on the altiplano with no infrastructure. No roads, no electricity, no gas, no water. Getting to the lithium will require developing all these infrastructures as well as the mining facilities and that is a lot of time and expense.

But, for me, it was that third impact that made me reconsider my views. In order to mine the lithium, the salar – as a stunning piece of natural beauty – must go. You cannot have a mining operation and an area of natural beauty side-by-side. Even if you start with a small mining operation, it will grow as time, and demand, increases. And as I discovered whilst reading an article earlier this year that is exactly what is happening.

So, at the time, whilst standing atop Isla Incawasi I realised that by 2020 the beauty of Salar de Uyuni may be forever lost. This may be my last chance to experience it. And what of the other places I had idly wanted to visit: the Arctic, the Antarctic, Peru, Jordan and Cambodia? How long before they too are irrecoverably altered? So that is when I changed to landscape photography: The day that I realised that I’ll outlive parts of the World around me. 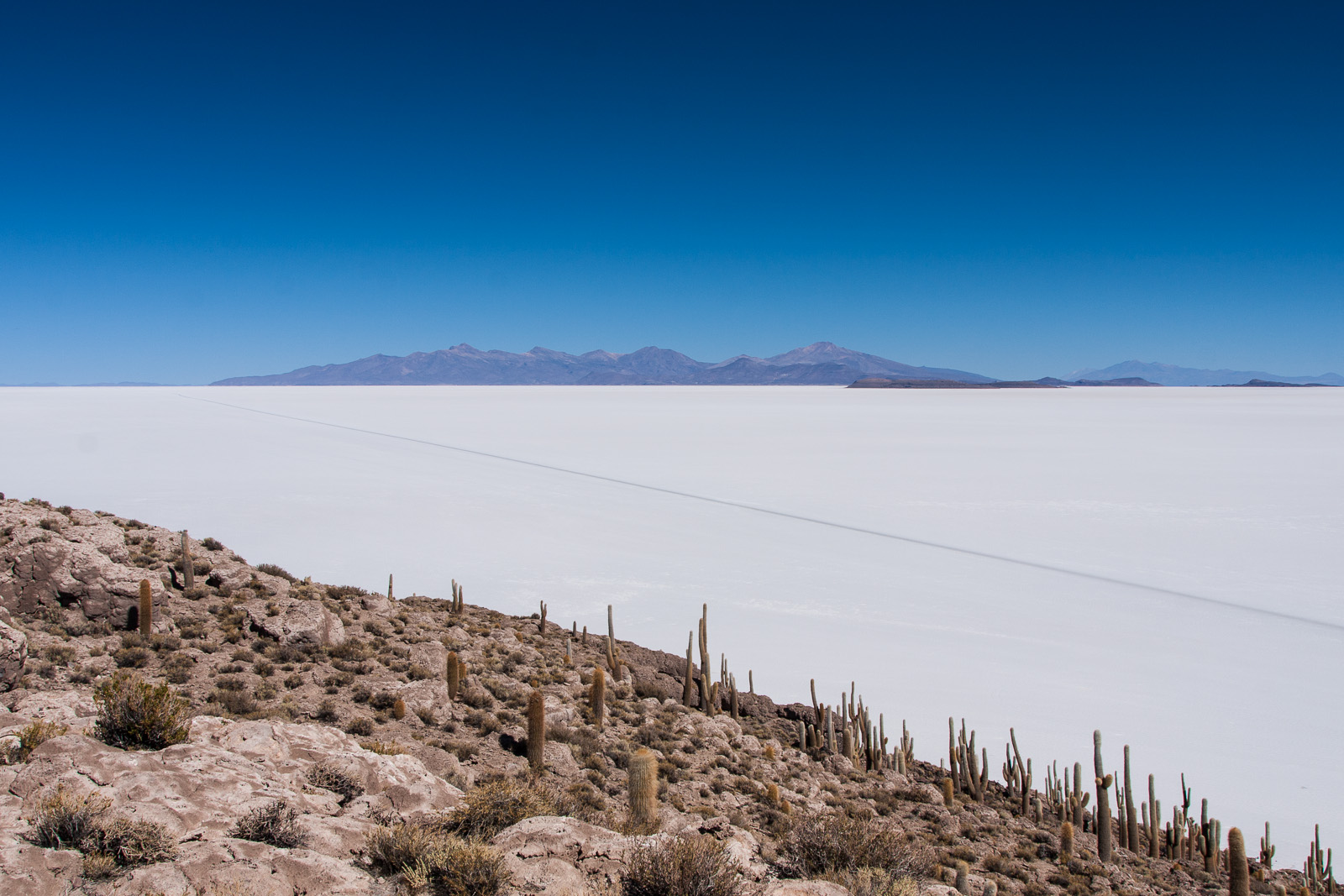 Whilst the salt may be unusually flat, this is still high up in the Andes. Volcanoes and other mountains can soar up to 2,000 metres higher. Here I’m a mere 100 metres higher. 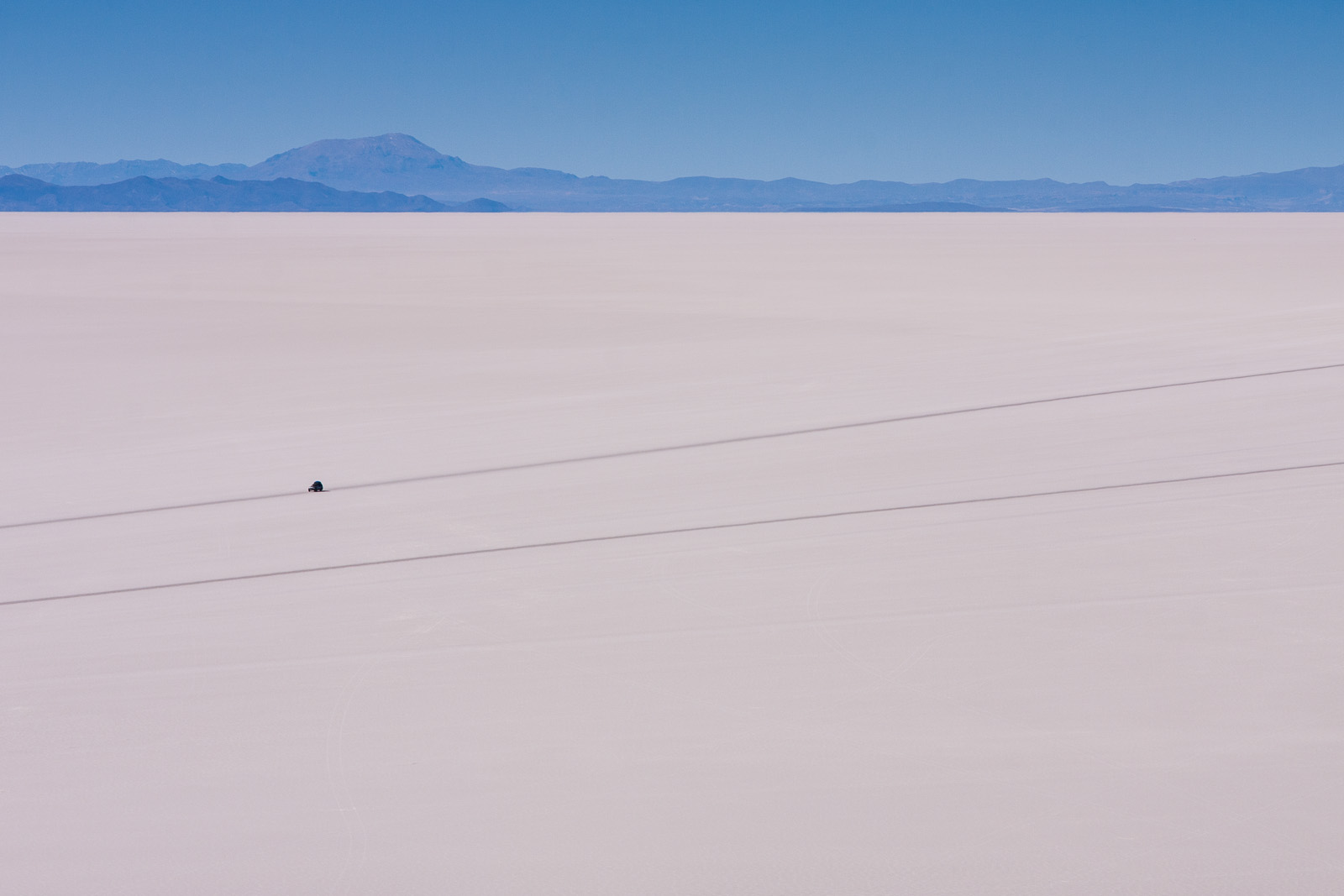 The dark tracks that can be seen crossing the surface are 4WD paths. Whether they stick to the same route to preserve as much of the beauty as possible or simply to avoid getting lost is one of many questions I have no answer to. 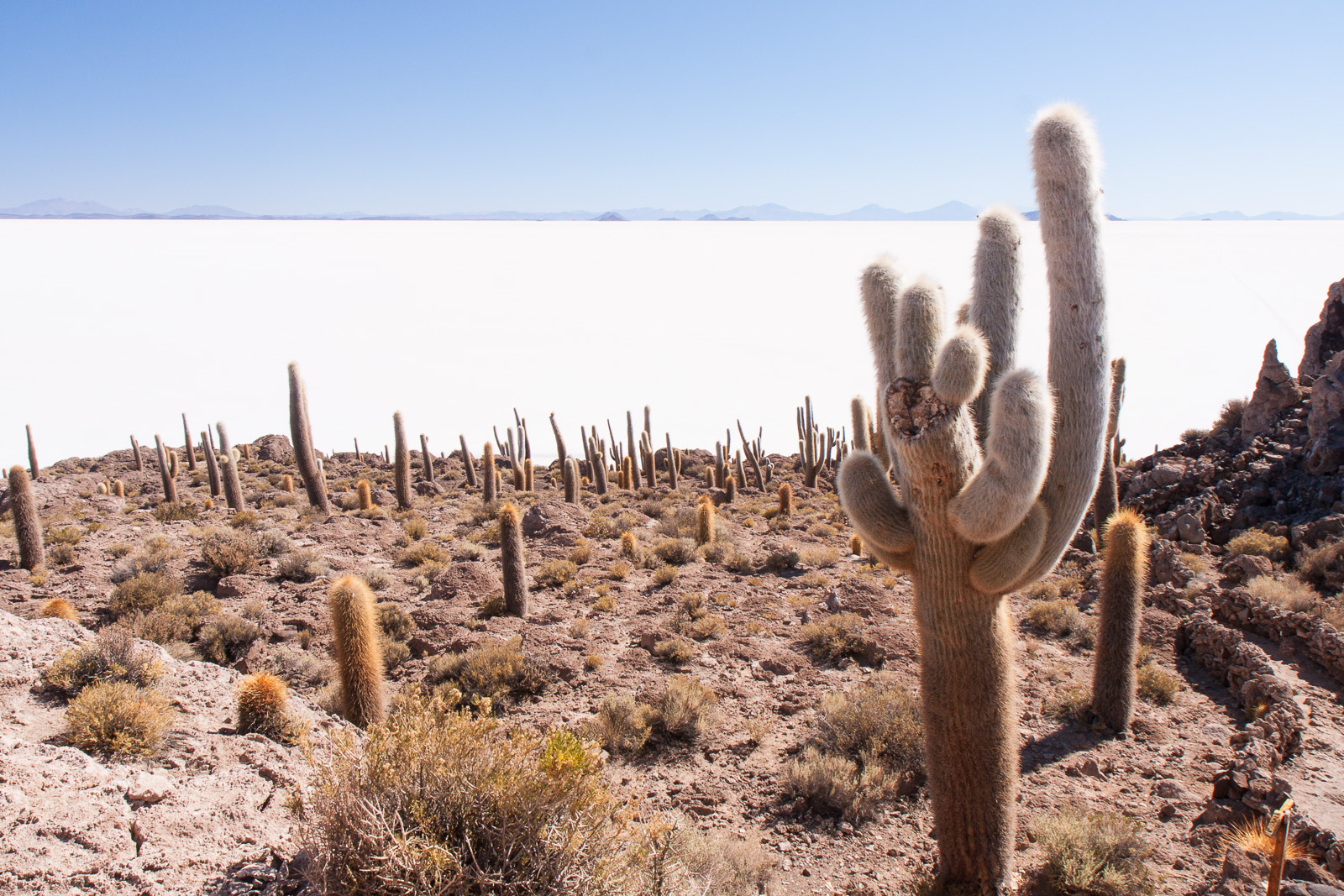 This is Isla Incawasi, a refuge for cacti that, despite the high salt content and lack of water continue to grow at a rate of 2.5 cm per year. 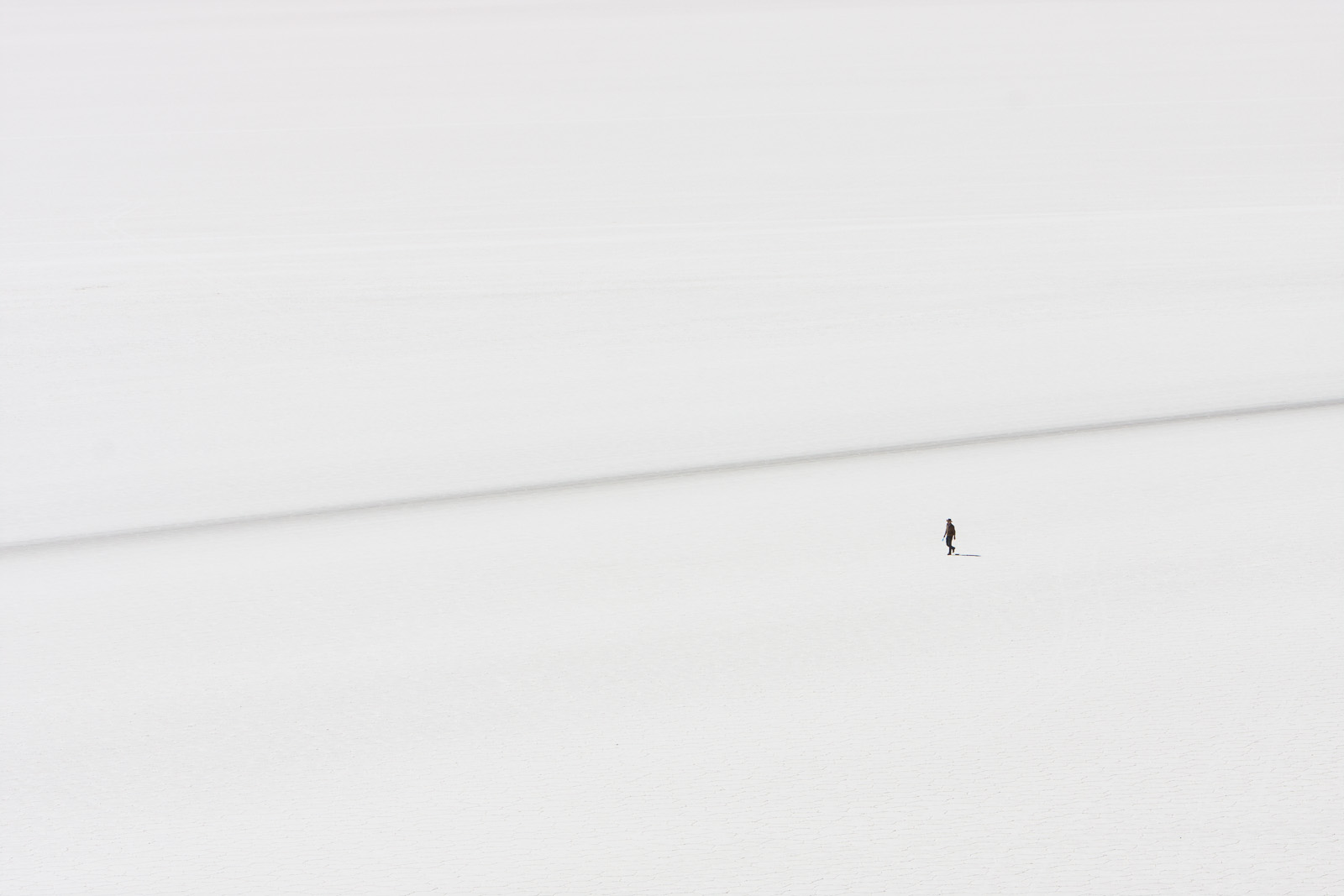 At 3,650m there day/night temperature variance is not to be ignored. Walking across the salar would be suicide unless properly prepared. And pack your sun block too. UV radiation is three times stronger at this altitude than at sea level. 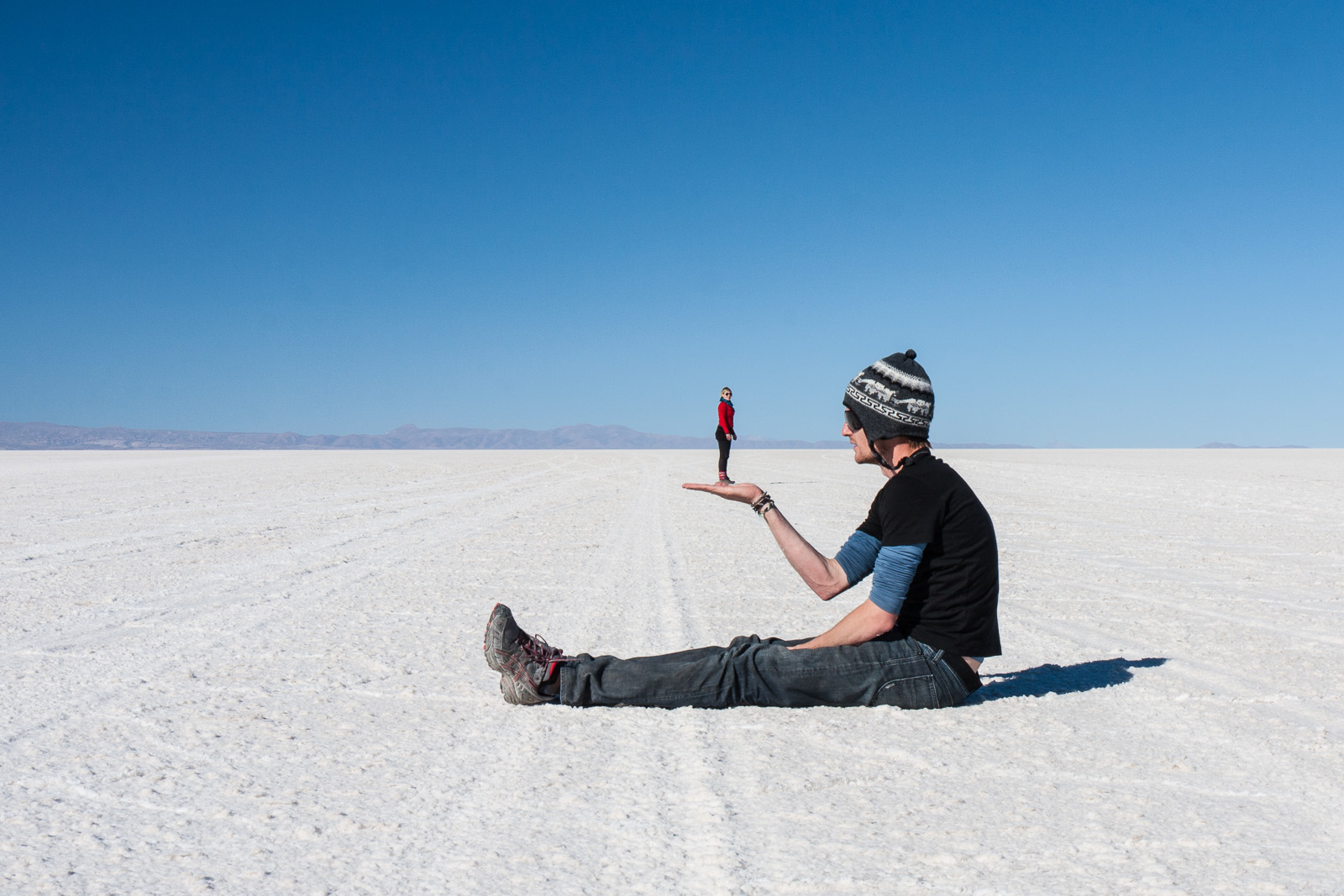 The near perfect flatness and vast size of the salar gives the brain a hard time when interpreting perspective, a fact tourists have loved for years. 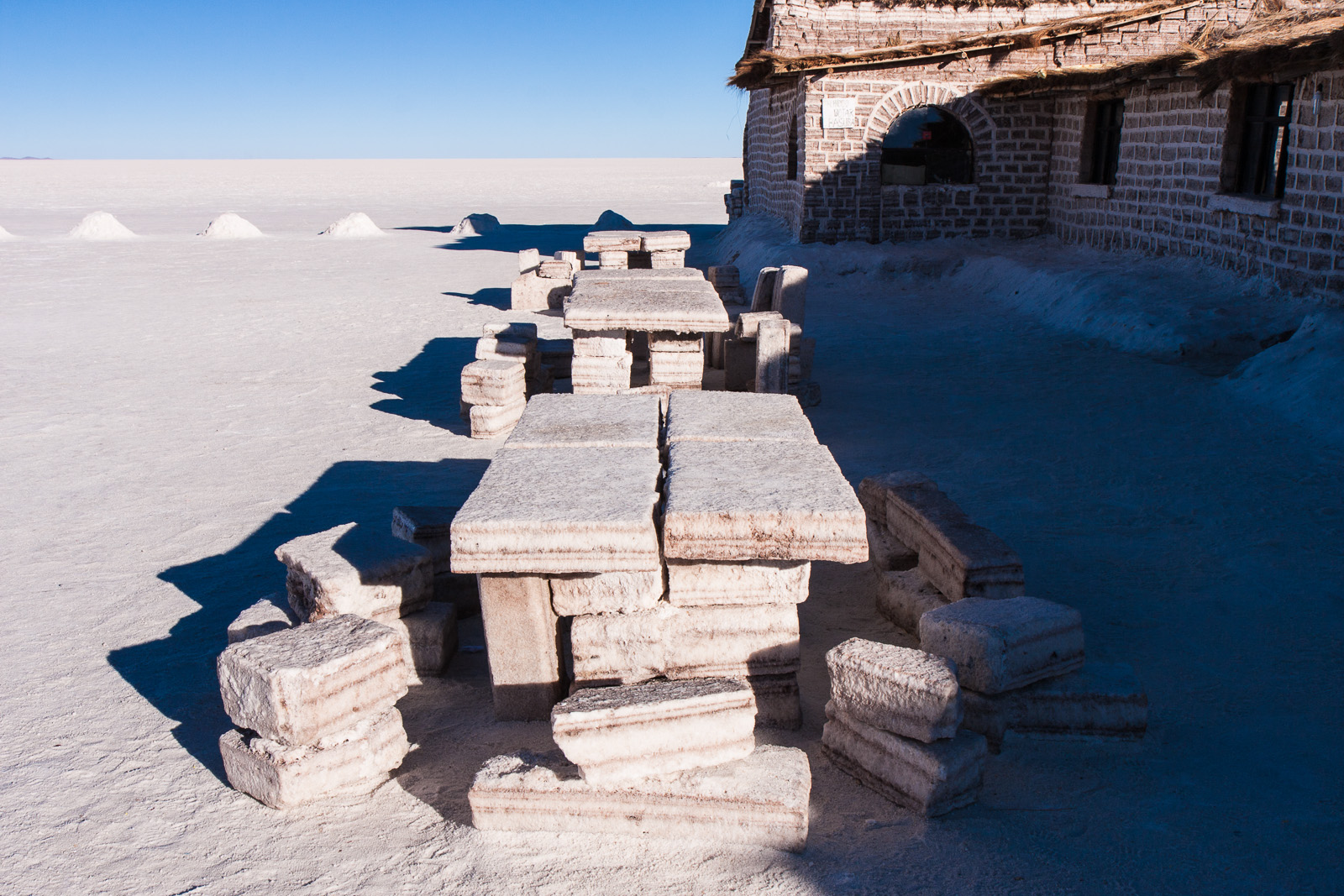 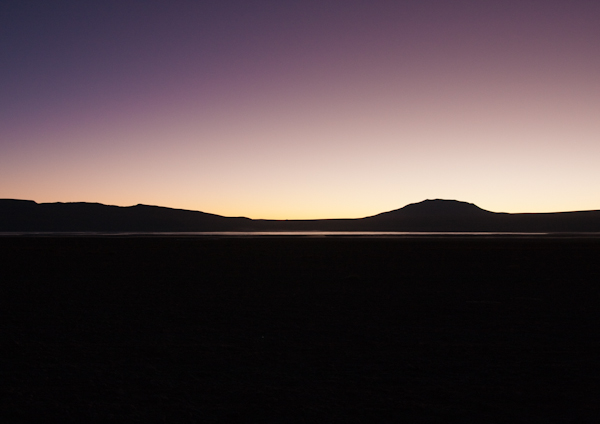 Back in 2010 I ended up in southwest Bolivia on a brief trip that changed my appreciation of the environment. The southwestern region of Bolivia lies high up in the northern Andes at an altitude between 4,200 and 4,800 metres. Its a barren, volcanic region, desolate and undeveloped. There’s no electicity; the only water in in the form of the lakes which are so heavily laden with volcanic minerals that the only life that survives in them is microbial extremophiles; there’s no roads, no cell coverage. Nothing. I fell in love with it immediately.

I was sharing a Toyota Landcruiser with five others and we arrived at the refuge that we were to spend the first night in. We were all surprisingly tired after a dinner consisting of a delicious vegetable soup and, er, less delicious fried spam. It also gets pretty cold at this altitude – we were expecting something in the region of -15°C and so we were all in the dorm and safely tucked up by 9PM  It was a rough night – the first day at high altitude and that’s when it hit me: All day I had been active and so my heartrate was nice and high, pumping those little oxygen molecules around. But as I slept and my heart rate slowed, my poor brain was slowly being starved in the oxygen-deprived high-altitude air. Consequently I woke up the mother of all headaches! Still, all thoughts of tiredness and pain were forgotten as I peeked outside and saw the pre-dawn morning light reflecting off Laguna Colorada…

The problem is that most of southwest Bolivia is a mineral, natural gas and rare element goldmine, primarily due to in being in a volcano belt. As a result the Bolivian government is under extreme pressure to allow mining rights which would greatly aid the impoverished country. If that happens, scenes such as the one here will soon be impossible.