Hvitanes – The British Occupation of Iceland.

Most people have heard of World War II. Involving thirty countries and approximately 100 million people it is still – perhaps thankfully – the largest conflict the human race has waged upon itself. Estimates are vague but somewhere between 50 and 85 million people lost their lives which at best means that one in two people involved died; at worst 85 per cent of all those involved never saw the end of the war. And the catalyst for such widespread destruction? Germany invading Poland.

But did you know that on the 10th May 1940 Britain invaded the neutral country of Iceland?

The British were well aware of the strategic importance of the North Atlantic and were keen to not lose their control of the area. At the time Iceland was a neutral country but after the German occupation of neutral Denmark, Churchill became increasingly concerned that Germany would next invade Iceland providing them a worryingly strategic base for submarine, naval and air command. Britain sent an offer of assistance to Iceland but this was rejected, presumably as a stance of neutrality was still seen as preferable, so Churchill ordered the invasion of Iceland to ensure that it did not fall under German control.

It was a “quiet” invasion and were it not for the fact that it was an act of war, the accounts of the half-baked planning, misunderstood orders and the fact that everyone in Iceland – including the German consulate – simply accepted it, would perhaps make it a worthy light-hearted war film.

The key reason for the occupation of Iceland was to ensure the continued British control over the North Atlantic and so a number of naval bases were constructed, including one in the deep-water fjord of Hvalfjörður, for the resupply and repair of naval vessels. This pier, and others like it, played a significant – and seldom recognised – part in the continued British control of one of the most important fronts of the war. The war eventually ended and the base, its purpose served, was abandoned to the Icelandic weather.

This shot posed a number of challenges. I wanted a long exposure – in the order of eight minutes to remove details in the sky and the water – but the only way to get this angle was to climb up on the other part of the pier and balance the tripod (and myself) on the middle steel girder. It was windy although not impossibly so, however the mist you see in the distance between the peaks was the real issue – wave after wave of rain! So taking this photograph meant starting the exposure and hoping the next rain shower didn’t arrive within eight minutes and that the wind did not pick up so much as to affect the image. When the rain arrived I had to pack up, retreat along the narrow girder to one of the derelict naval huts behind me and wait until the rain passed. Then try again. It took a good couple of hours. 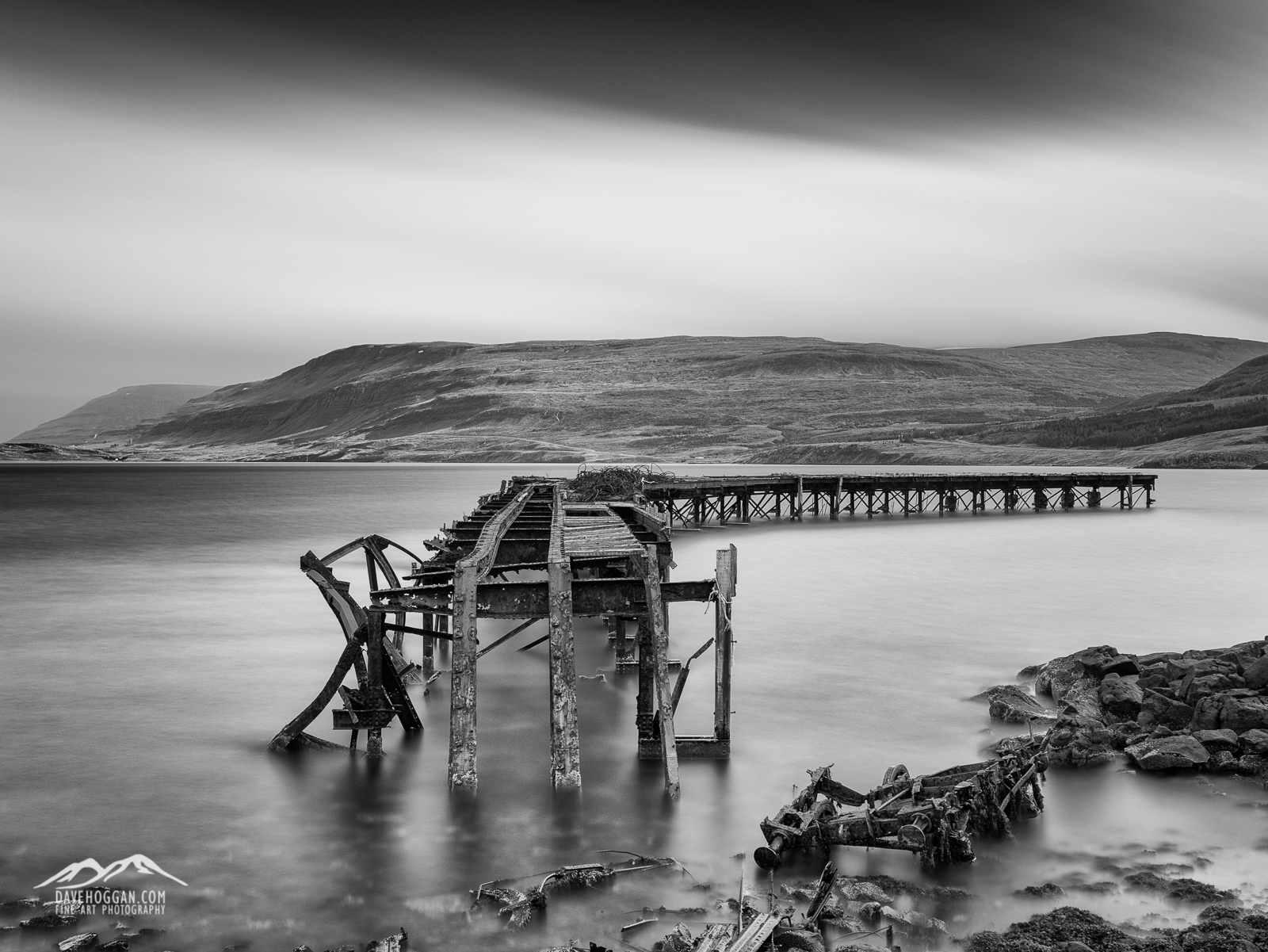 The remains of the pier of the British naval base at Hvitanes.

Whilst in Iceland earlier this month my time on the Snæfellsnes peninsula was frustrated by some decidedly wet and windy weather, so windy that on some days the water of the waterfalls was being blown straight back up the cliff face back to where it had just come from. When it wasn’t raining or blowing so hard that it defied gravity, the sky was usually a rather dull and featureless white due to the clouds gathering around the high mountain peaks.  So, when the cloud cover broke and some level of detail returned to the sky it was a bit of a mad dash around the peninsula to visit some of the more interesting sites.

Once such place is Gatklettur, a rock arch walking distance from the village of Arnarstapi on the southern coast of the peninsula. There is a gentle hike along the coast between Arnarstapi and Hellnar that has some wonderful rock formations, but Gatklettur is perhaps the most visually interesting with its horseshoe arch and near perfectly circular ‘window’. It is frequently photographed and it is really tempting to photograph it as an incoming wave crashes against its seaward side and water erupts from the circular hole. So I did.

But I favour this, the aftermath where the white foam of the water cascades down the basalt rock, picking out a path over the jagged steps. 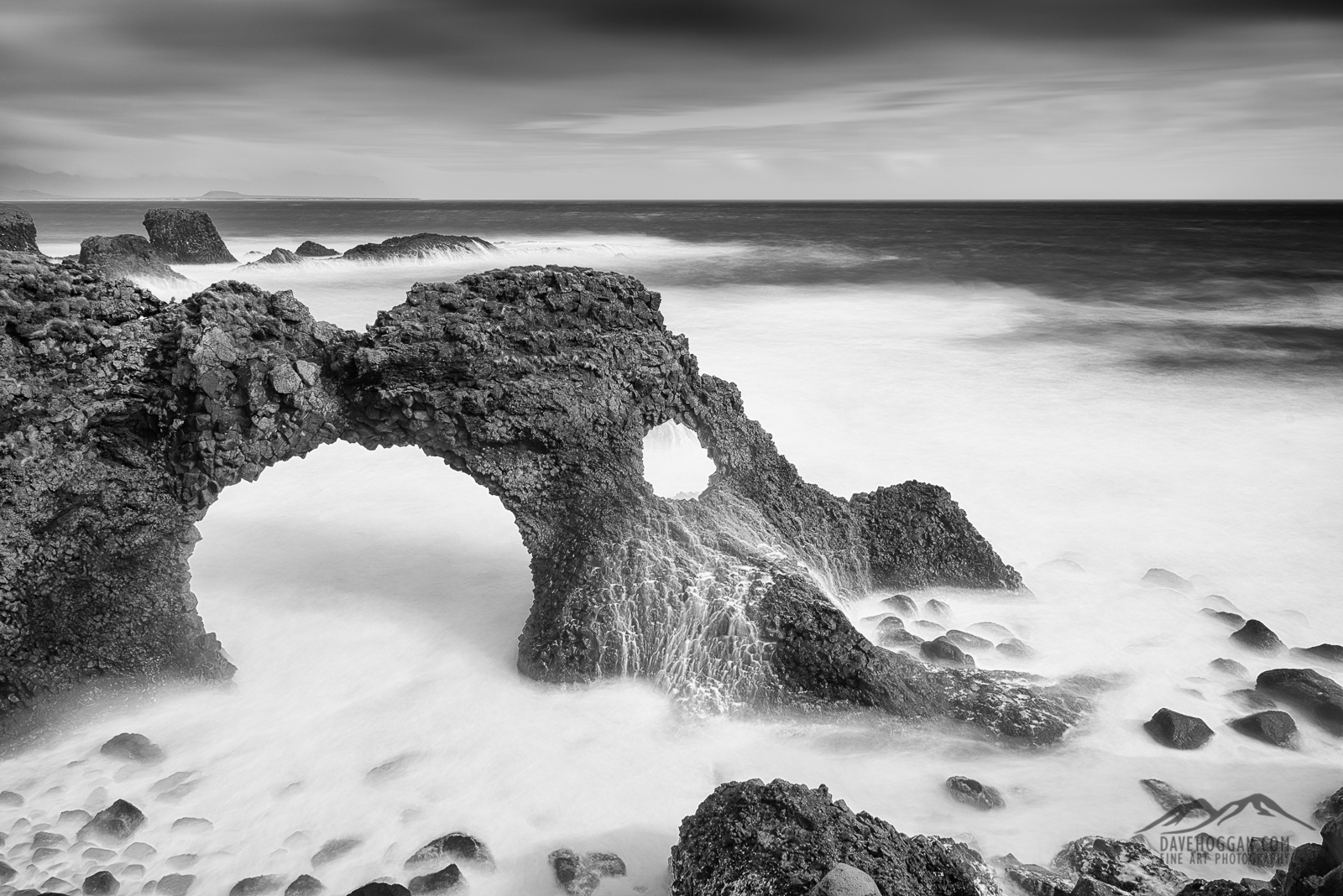 The skeletal remains of the old pier. 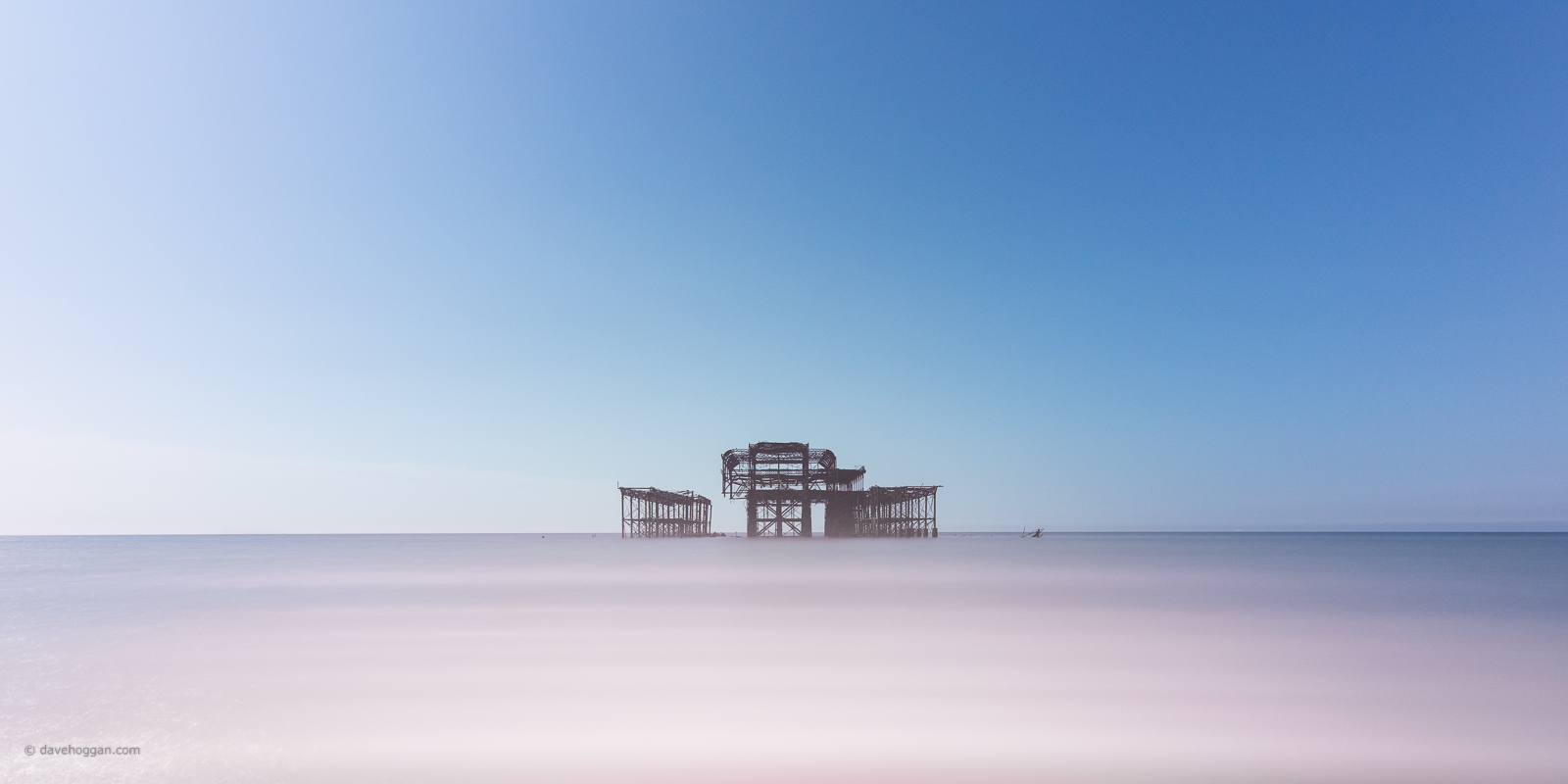