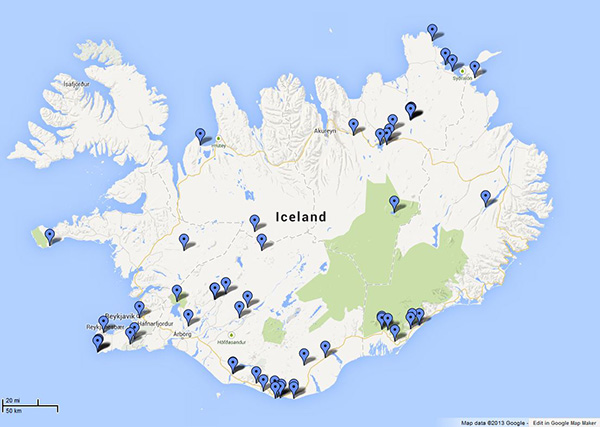 Iceland Kill Date and Knowing When to Quit

Today marks the kill date for the Iceland trip; the date after which cancelling would incur significant financial losses. So, have I pulled the plug, or am I now financially committed? Of course I haven’t, but that just means a lot more work to do.

With less than two weeks until I fly out to Iceland, there is still a fair bit of planning to take care of, and the task of getting everything in order before then is made more challenging by the fact that I’m away on business this week and working next weekend. On the plus side, being stuck in a hotel for the next few evenings should minimise the distractions and the wonder of cloud storage providers such as Evernote and Dropbox means that, after spending weeks on my multi-monitor behemoth of a computer at home collecting information and distilling it into a Word document, as I opened my laptop at the Premier Inn hotel here in Grimsby, UK, a few moments ago all my work seamlessly appeared. When it works, technology is great.

Having my notes magically appear, however, doesn’t detract from the fact that I’m short for time. For week-long city breaks, it really would not be an issue as you can easily make last-minute changes on the fly – you can even just make the whole thing up as you go along and make a success of the trip. On the other hand, when travelling across a country, and you have a purpose – say photography – then at the very least you need a framework.

I set out a rough framework in a blog entry a couple of weeks ago largely based upon the fact that I had booked accommodation in various places around Iceland. Since then, I have continued to scour the Internet for interesting, and potentially photogenic, sights and it has been no surprise that I’ve found more things I would like to see.  This has brought about the inevitable checking to see if I can change accommodation so I can spend time in the new place, which has had the knock-on effect of having to decide which of the original planned sights would be culled in order to free up time. In short, I was dangerously close to undoing a lot of basic, but critical, planning I had completed. But, that would likely be disastrous this close to the start date and so I must simply accept that the accommodation – and hence the sights – are largely fixed.

Well, not quite.  The framework thankfully does allow for some modification, especially when using Reykjavik as a base camp.

As mentioned in a previous post I have three days for Reykjavik, one without a 4WD rental and two with. The plan is spend the first day investigating the city on foot and getting back into the right mood for seeing things photographically – a step I have to pass though on every trip. The following two days were, up until this weekend, rather vague. Now they have shape and meaning.

On one of these days I plan to investigate the Reykjanes peninsula, which for many visiting Iceland is famous as the home of the Blue Lagoon – and the international airport. However, I may very likely completely bypass the tourist magnet altogether in favour of some seriously photogenic coastlines, complete with menacing rocky spires and crashing waves. Throw in some monster storm clouds and I’ll positively grin like the Cheshire cat. Aside from the coastline, there are a couple of lighthouses, some nice mountains and some lakes. But what has really captured my eye is the geothermal power station which, whilst I perhaps haven’t sold it very well, I can see some real photographic promise in. Whilst the day is relatively local to Reykjavik, I’ll be getting used to driving the 4WD and, as some of the roads out on the peninsula are gravel, not paved, it’ll be an adventure nonetheless.

The second day is going to be a bit of a marathon, involving some 400 kilometres and seven hours of driving. The plan is to drive up to the geysers Stokkur and Geysir, from there head up to Gulfoss waterfall and then, and this is the time consuming part, up to Gygjarfoss waterfall. I say time consuming as the road ends after Gulfoss and becomes a highland, or F road. In other words, it’s a dirt track. Even in the 4WD I’m not going to be traveling very fast on that. My hope is to spend a couple of hours at Gygjarfoss  and head back at about 3-4PM so I can arrive at Thingvellir National Park for dusk.

So, another two days now have shape and slowly I’m beginning to have some faith that I will see the things that I would like to see. There will be much that I have to miss, but that’s where organising a photography expedition is like life: It’s all about knowing when to quit and just be happy.