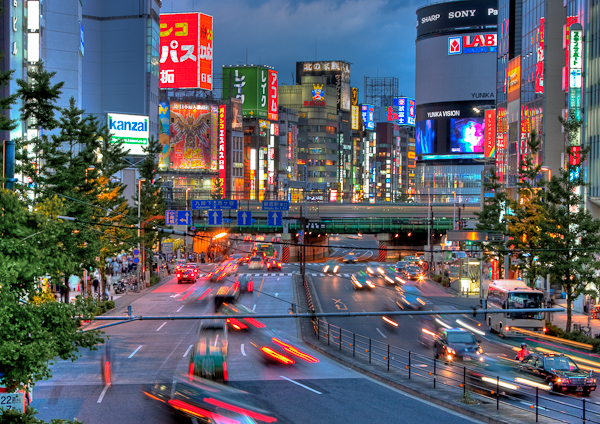 Well, I was hoping to get out in Cambridge for some night photography but the consultancy work ran on longer than expected. So instead I thought I’d post from a couple of years ago of another well-known city.

Tokyo is often credited with being the inspiration for the futuristic cityscape in the 1982 film Bladerunner. Alas, it would seem that this is an urban myth and director Ridley Scott simply based his vision on an industrialised Los Angeles, albeit one where global population migration meant that, in his vision of future Los Angeles, there were large Hispanic and Japanese populations. So I’m guessing that it’s because of all the Japanese signage that people make the Tokyo cityscape connection. That said, as dusk falls and the neon lights up, you simply cannot help but think Bladerunner…

The low light conditions meant that a one second or so exposure was required but I didn’t have the tripod with me at the time. The image was taken by holding the camera as steadily as I could on one of the bridge railings and trying to time it so that the groups of people who were constantly crossing the bridge weren’t causing too much vibration. During post production I created an HDR image off the single shot to  push the colour saturation – it felt appropriate given that many feel slightly overwhelmed by the full-on nature of Tokyo the first time they visit it.