After the heat of a lava lake caused a couple of my Canon LP-E6 batteries to begin show issues when charging it is time to replace them. Better now than forget about it until two days before I head off on the next expedition and then panic ensues. In any event, as the recent Ethiopian trip proved, you can never have too many batteries.

Up until now I have been using a mixture of official Canon LP-E6 – which came with the camera bodies – and aftermarket batteries. Without actually looking at them I would be hard pushed to tell the difference between the official and aftermarket cells; both appear to last a for a high shutter count and the Canon 5D MkII body happily shows the charge left on both.

But, as both battery packs that have now developed issues are the aftermarket ones, I have decided to replace them with the official Canon ones. It was not an easy decision to make: £79 for an official battery pack versus £20 for a good quality aftermarket one. But as my work takes me to more extreme and remote locations, I do have to rely on the kit I take. As the old proverb goes “For want of a nail” – the nail in this instance being the battery pack the powers the camera and lens.

Now, whilst I didn’t buy the battery pack because of the packaging, I do have to say that I’m impressed. A lot of time and effort and been spent on the whole presentation. It oozes quality. In fact, had I not actually been examining every detail I would have never known.

But it is definitely a fake. Can you spot why? 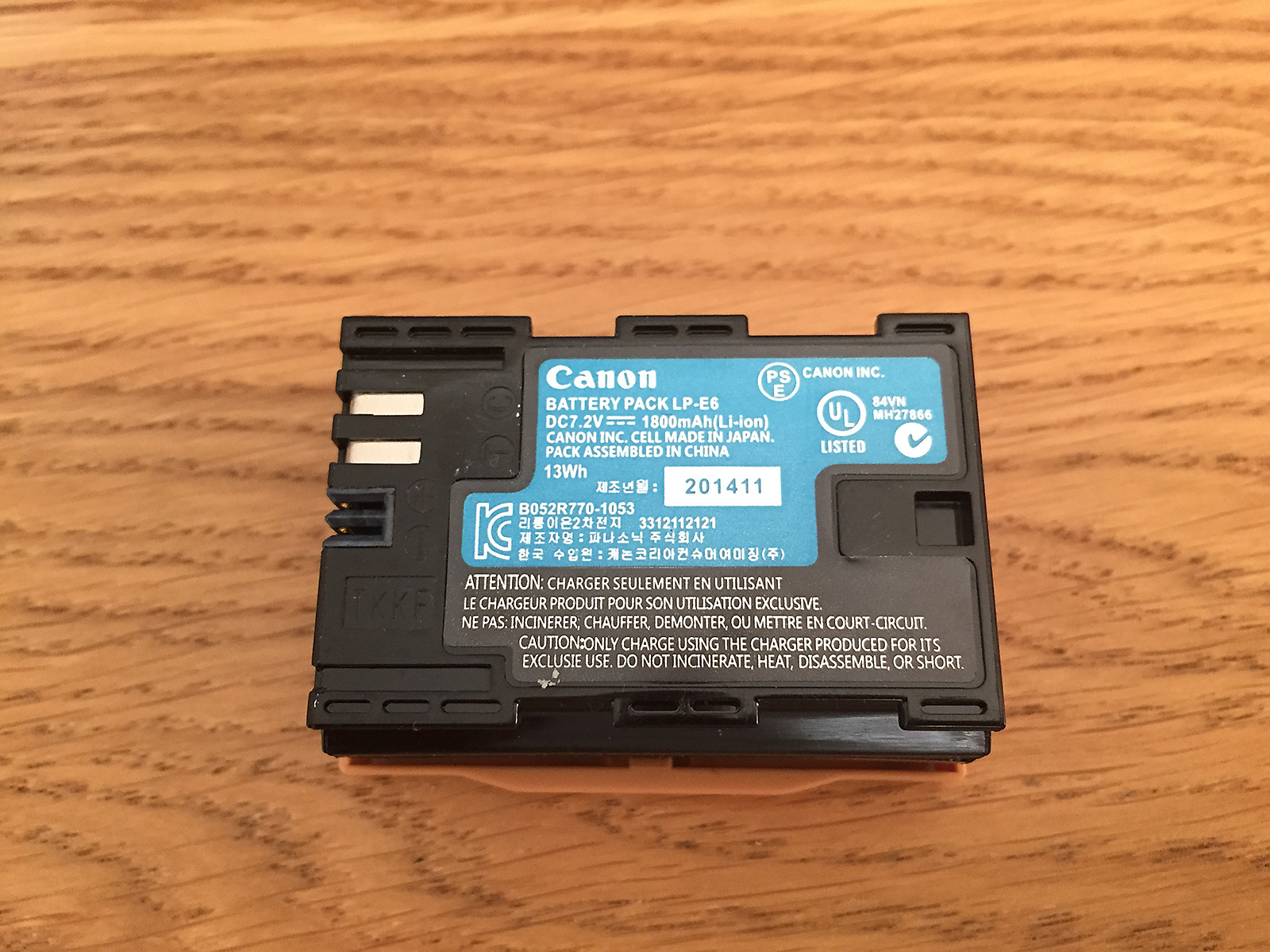 Can you spot why this Canon battery pack is not the real thing…?

Here’s some more shots of the very detailed packaging. 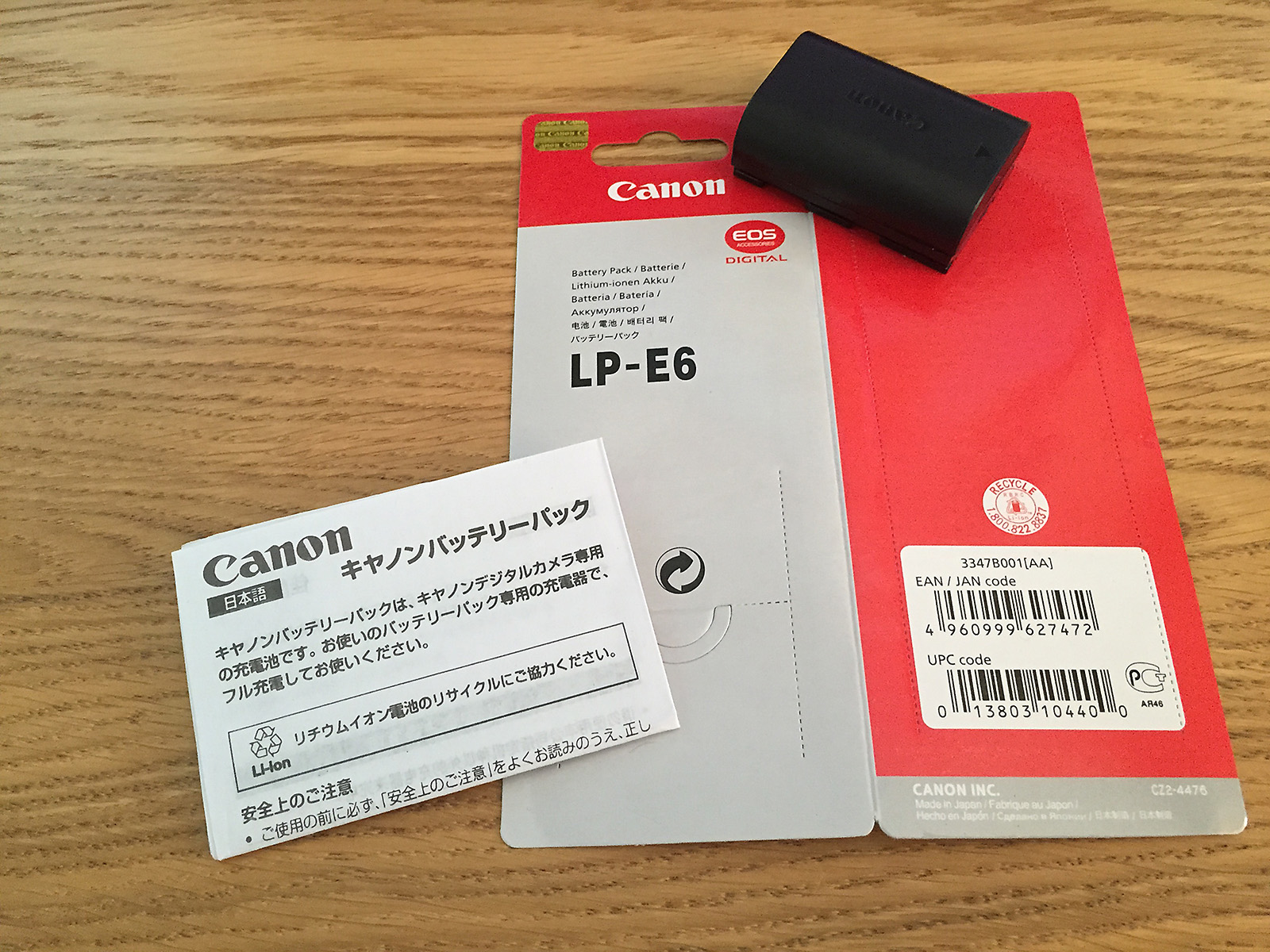 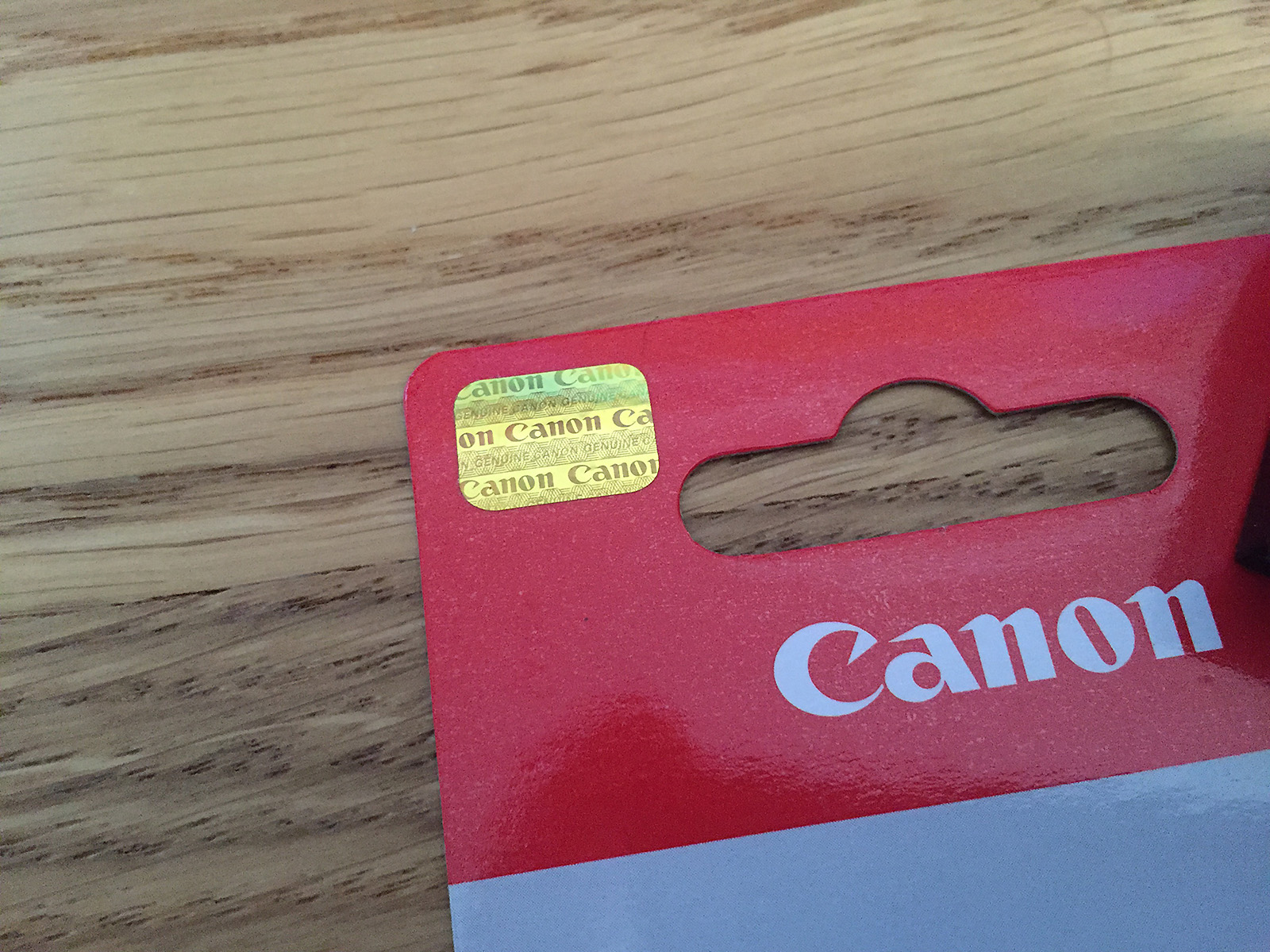 The hologram is a nice touch…

Needless to say that this was bought off eBay so it is very much caveat emptor, but this was being sold as “genuine and original” with a price high enough that made me think that it could well be precisely that. It could have been any number of legitimate sellers: unwanted present, Christmas cost more than expected unused items being sold off, someone no longer interested in photography to name but three.

But for someone to go to all this trouble to make a fake look and feel like the genuine battery pack does make me wonder just how much money there is in the fake market.

Now the point of this is not to suggest than battery packs from a source other than the original manufacturer are bad: there is a big difference between aftermarket batteries and fake ones. For many years I have been quite happy with aftermarket batteries (on my current 5D2, and 7D and well as my previous 40D) and before they went bust Diamondback batteries were my favoured option. I also own a Hahnel battery pack and they too are another well regarded manufacturer. Well made aftermarket battery packs from reputable manufacturers include all the require protection circuitry to stop overheating and potential fires. But if a seller is masquerading a battery pack as an original then it is going to be for profit. In that case you can probably forget the niceties such as protection circuits.

So, what are your options?

First, buy from a reputable source and official Canon resellers. If it appears to a ‘too good to be true’ deal, it probably is. That said, you still have to exercise caution. Amazon is a good example: 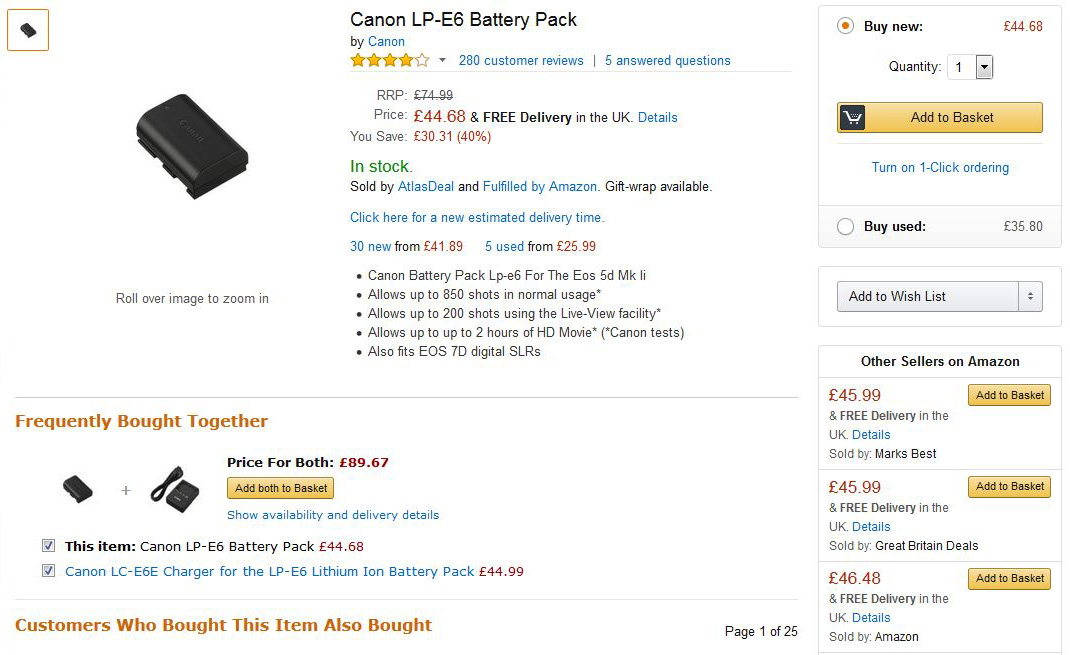 Amazon is a reputable company, but there is a big difference between ‘sold by’ and ‘fulfilled by’. The best option here is the £46.48 option as that is sold and fulfilled by Amazon, who incidently are an authorised Canon reseller.

Second, take some time to learn about some of the obvious signs of counterfeiting. Canon have a link off their US site (http://usa.canon.com/cusa/about_canon/standard_display/aboutcounterfeits) although Canon’s images are too small to be of use. A well written and clearly documented article for Canon LP-E6 counterfeits can be found at http://tazintosh.com/en/canon-batteries-watch-out-for-counterfeits/

Third, simply accept that, after spending £1500 on a camera body and sticking a lens costing in the region of £1000 on it, trying to save money by buying cheap batteries to power the whole thing isn’t going to be your greatest decision. Frankly, put in those terms, it really make no sense at all. Even at the full retail price, the Canon LP-E6 is less than 3% of the average camera/lens combination it powers.

But back to my story. The seller has refunded me and I’ve decided not to name-and-shame, primarily as there is no real point. There are too many counterfeits out there and highlighting a single seller will not achieve much. Better to cut the problem off at the source and accept that a reliable and good quality battery pack is going to cost.

Of course, I could go cheap and save £40 but given that my average trip these days costs at least one hundred times that, if the battery pack stopped charging on my next expedition and I missed the shots I was after I had better be near another lava lake – that would give me something to throw myself in…

This entry was posted in Hints and Tips and tagged gear.