As a result of not spending so much time diving on the forthcoming trip to Iceland (see last post for the “why”) I now have an extra day or two spare. But whilst having some slack time in the schedule is always a good thing, I’ve already planned “quiet” days and so don’t really need any more. For some destinations it might be a struggle to fill these extra days, but not so with Iceland – it has the opposite problem: What to leave out.

I’ve been driving to a customer site the past couple of days and so had plenty of time to mull the various options over in my mind and I have decided to take my usual “quality over quantity” approach – after all Iceland is notorious for its unpredictable weather and all the images I have planned have specific moods that would easily ruined by the wrong weather. But whilst this approach makes sense to me, others do not seem to share my opinion. I spend a fair bit of time over on the Trip Advisor Iceland forum and not a day goes by without someone asking something along the lines of “Here’s my seven-day itinerary to see the whole of Iceland – what do you think?” I do understand that people have limited time for travel, but seriously, what kind of experience are you going to have rushing around trying to cram everything in? Surely it would be much better to pick a few highlights and explore them a bit more?

A classic example of this is Seljalandsfoss, one of the most popular tourist destinations in Iceland. 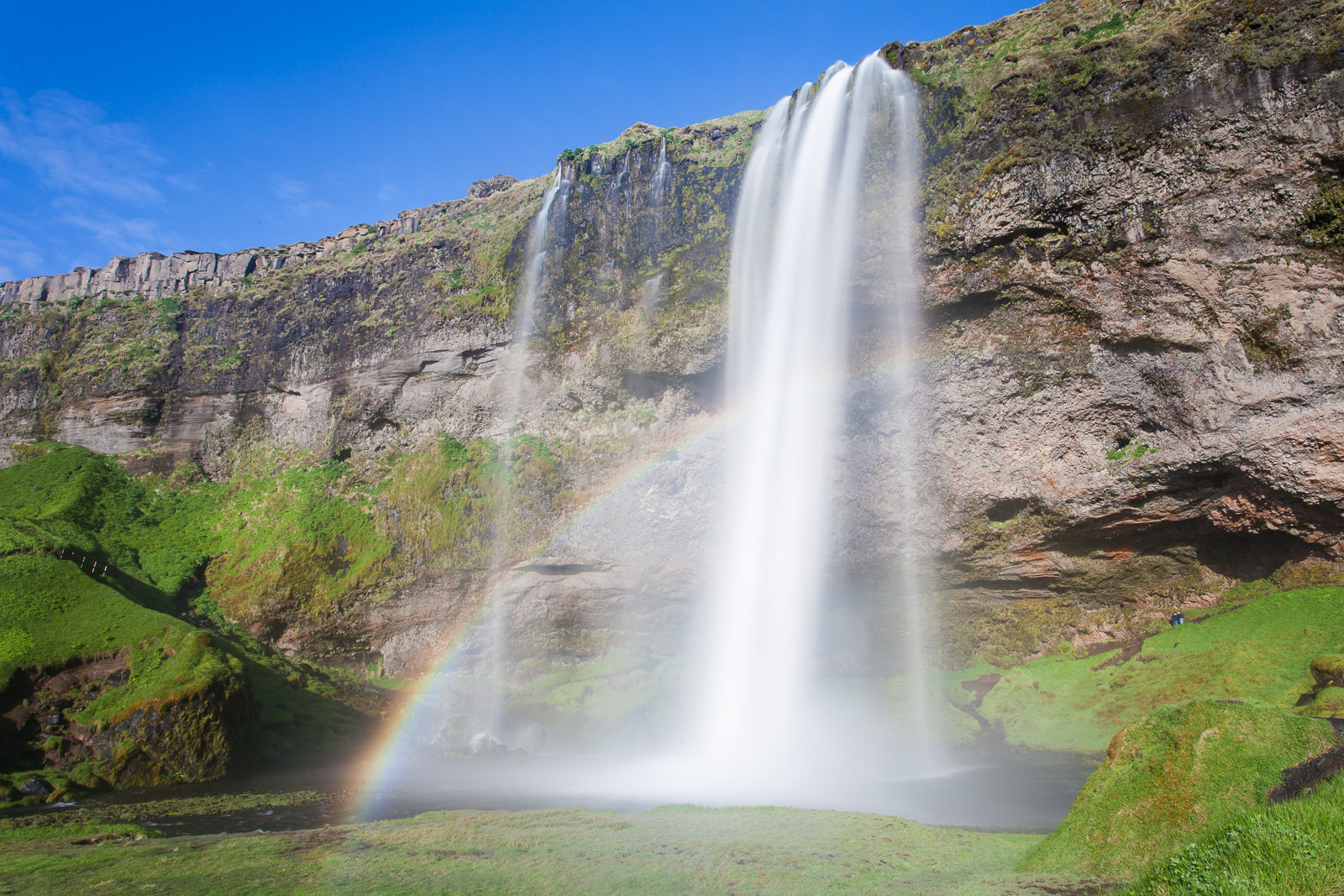 Seljalandsfoss is extremely popular due to its close proximity to Reykjavik and the fact that you can walk behind it. Oh, and it’s a waterfall – everybody loves a waterfall… [Click to enlarge!]

Seljalandsfoss sees tourists arrive by the coachload – thousands of them every day during the summer months – and it is easy to understand why. It is an easy day trip from Reykjavik, it is impressively big and easy to approach – you can even walk behind it along a path. The chances are good that you’ll even get to see a rainbow due to the water vapour in the air. So, if you’re looking to see Iceland’s top attractions, you’ll end up here. On my last trip I visited Seljalandsfoss a few times hoping to get an image I was happy with and spent quite a bit of time watching the tourists arrive and depart like waves breaking on the shore. And virtually all of them followed the same pattern: arrive, follow the path to the waterfall, take some pictures, then either return to the car or coach or continue along the path and walk behind the falls and then return to the car or coach. And if you’re on a tight time schedule that’s your total experience of Seljalandsfoss – you’re already off to ‘bag’ the next tourist hotspot. What almost none of them did was take time to look around but had they done so they would have had a bit of a surprise as there are actually two waterfalls. A short walk past Seljalandsfoss is Glufrafoss. Unlike its more popular brother Glufrafoss is hidden from view – in fact you have to walk through a crevice in the cliff face in the above image. 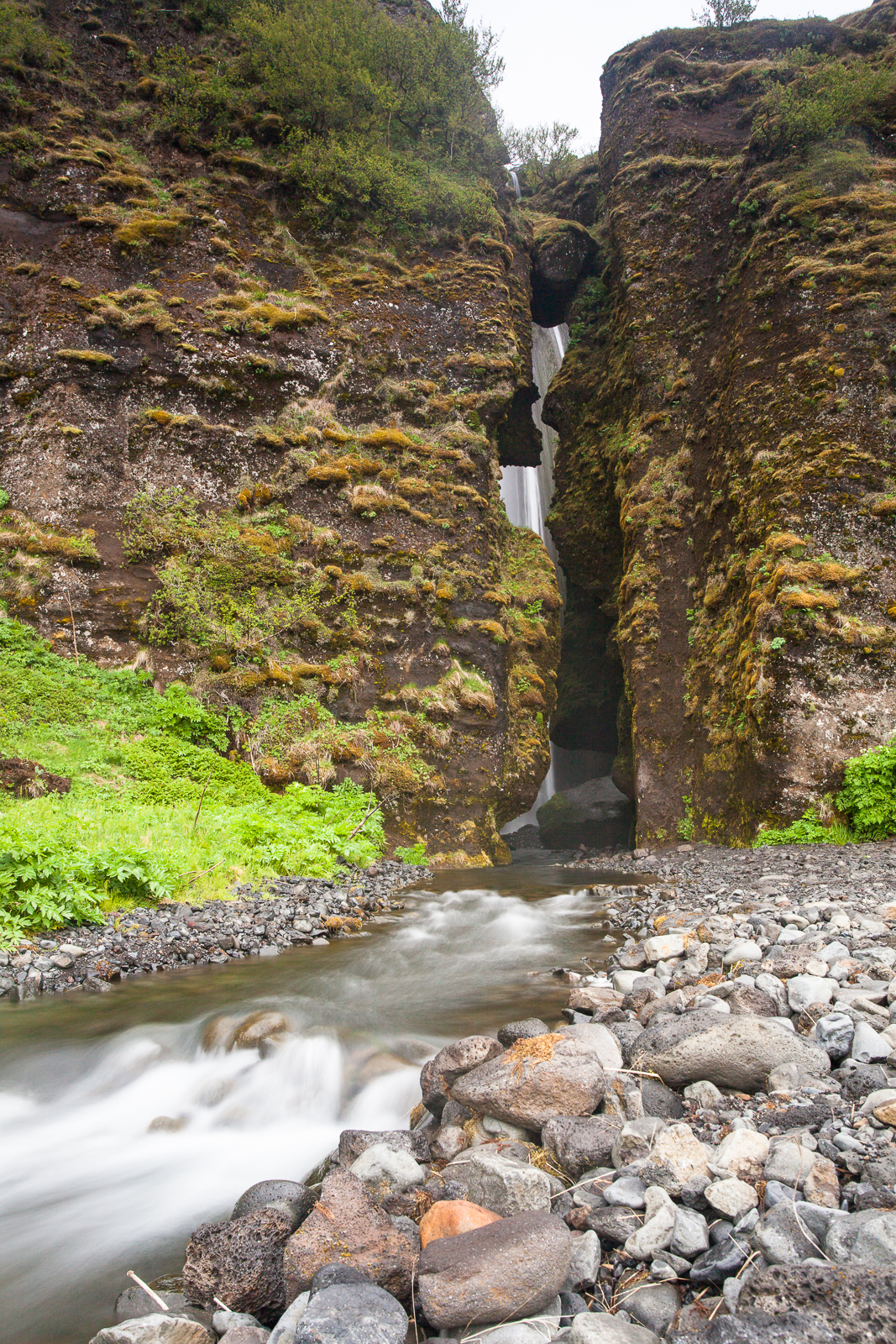 Glufrafoss is only a short walk from Seljalandsfoss but for the number of tourists it sees, it could be a million miles away… [Click to enlarge!] 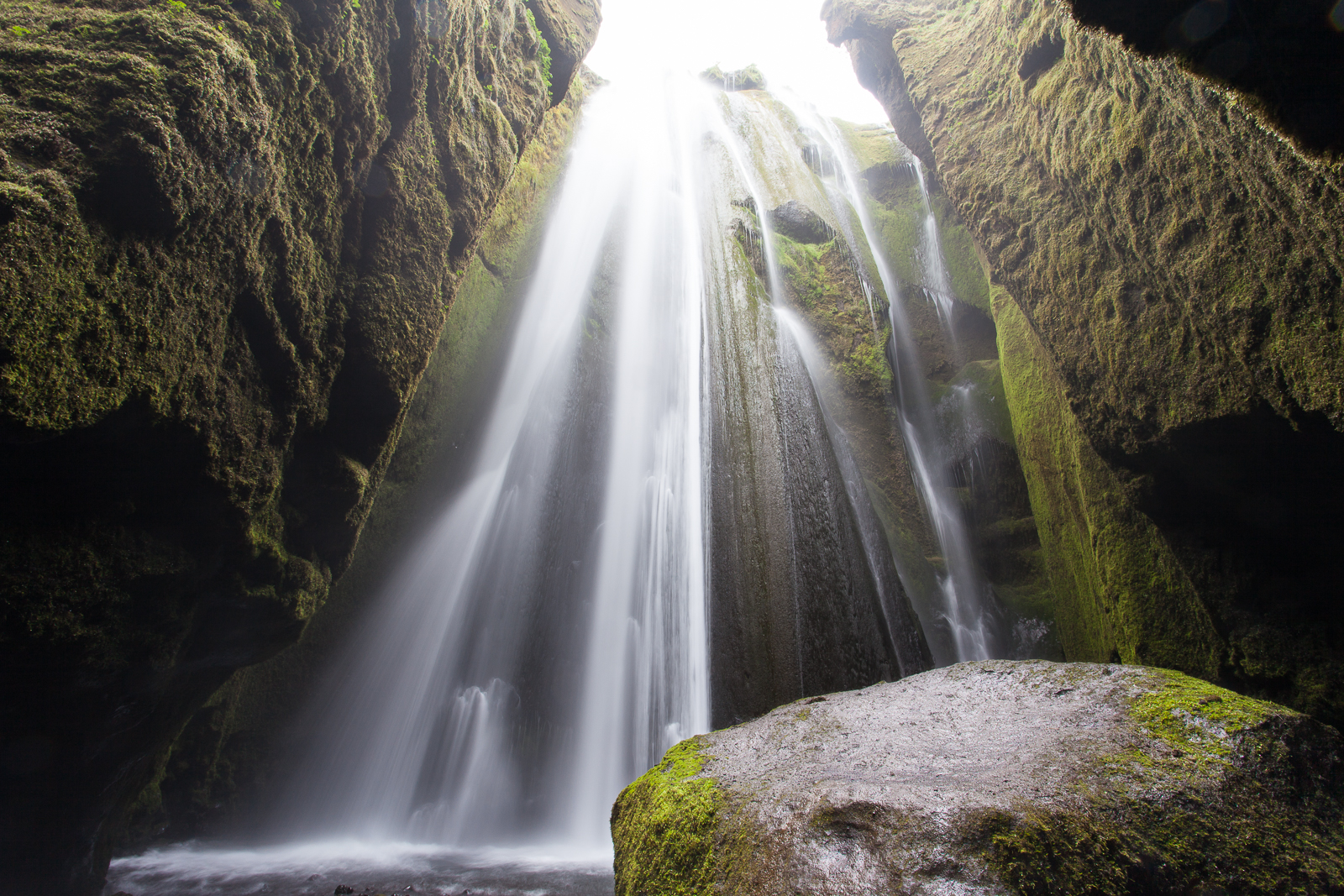 As a picturesque setting there may be better waterfalls, but as a private table for two having a picnic it will be an experience few others will have had. [Click to enlarge!]

But when you do you have the falls all to yourself as you stand in a 6 metre wide opening with the rock face towering above you on all sides. It’s loud and you can feel the refreshing effects of the ionised air and you’ll probably want to stay a while – luckily there is a handy rock to sit upon. The brave could even stop for a picnic – just bring your waterproofs as it does get wet!

The other advantage of the “quality over quantity” approach is that you get to have different experiences of the same place. Skogafoss, another extremely popular tourist stop – and usually on the same tour as Seljalandsfoss – is a great example of this. Here’s what Skogafoss looks like to most tourists: 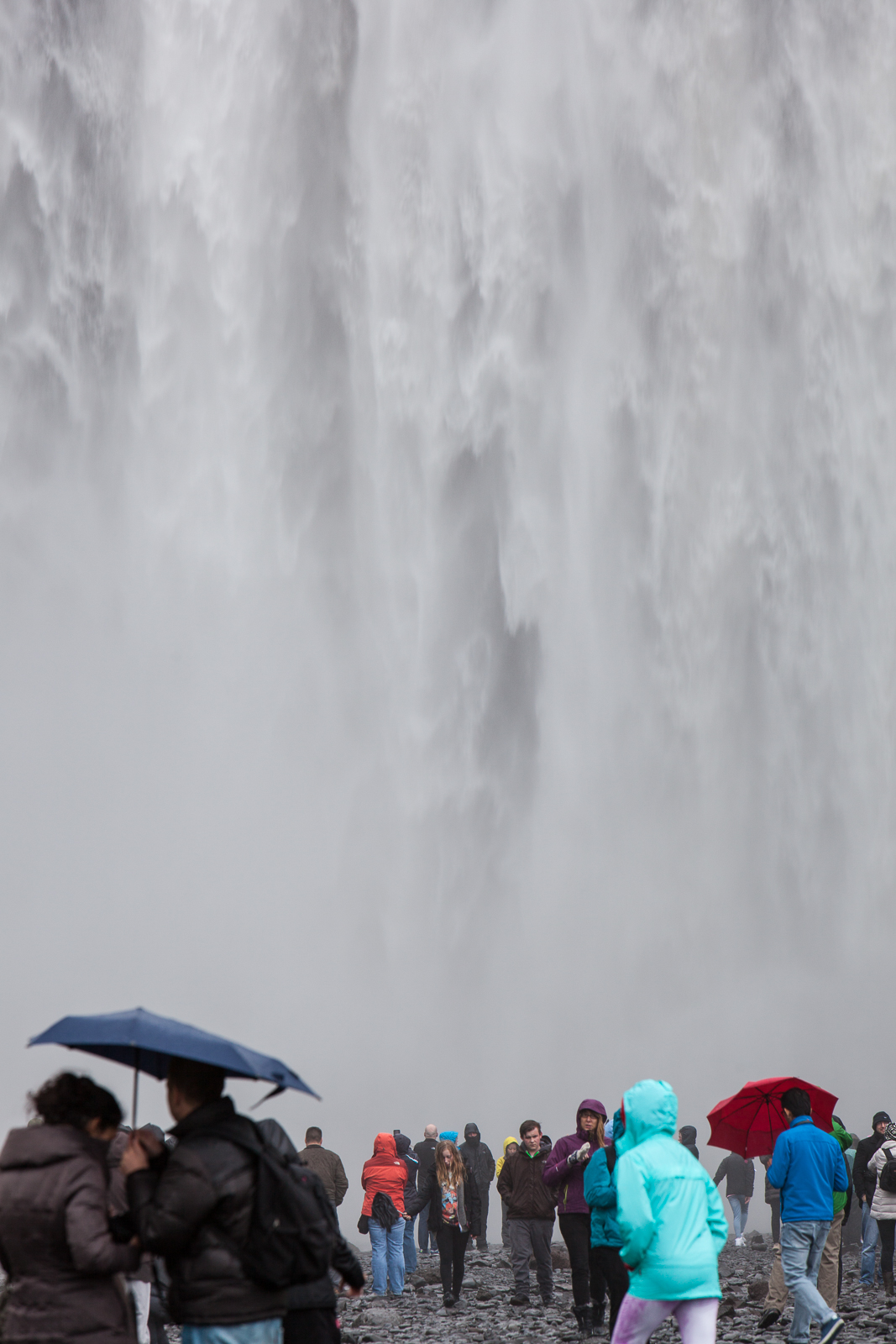 Skogafoss, a truly magnificent sight by any standards, is usually hidden by a mass of tourists. [Click to enlarge!]

And here’s what looks like to those who take more time: 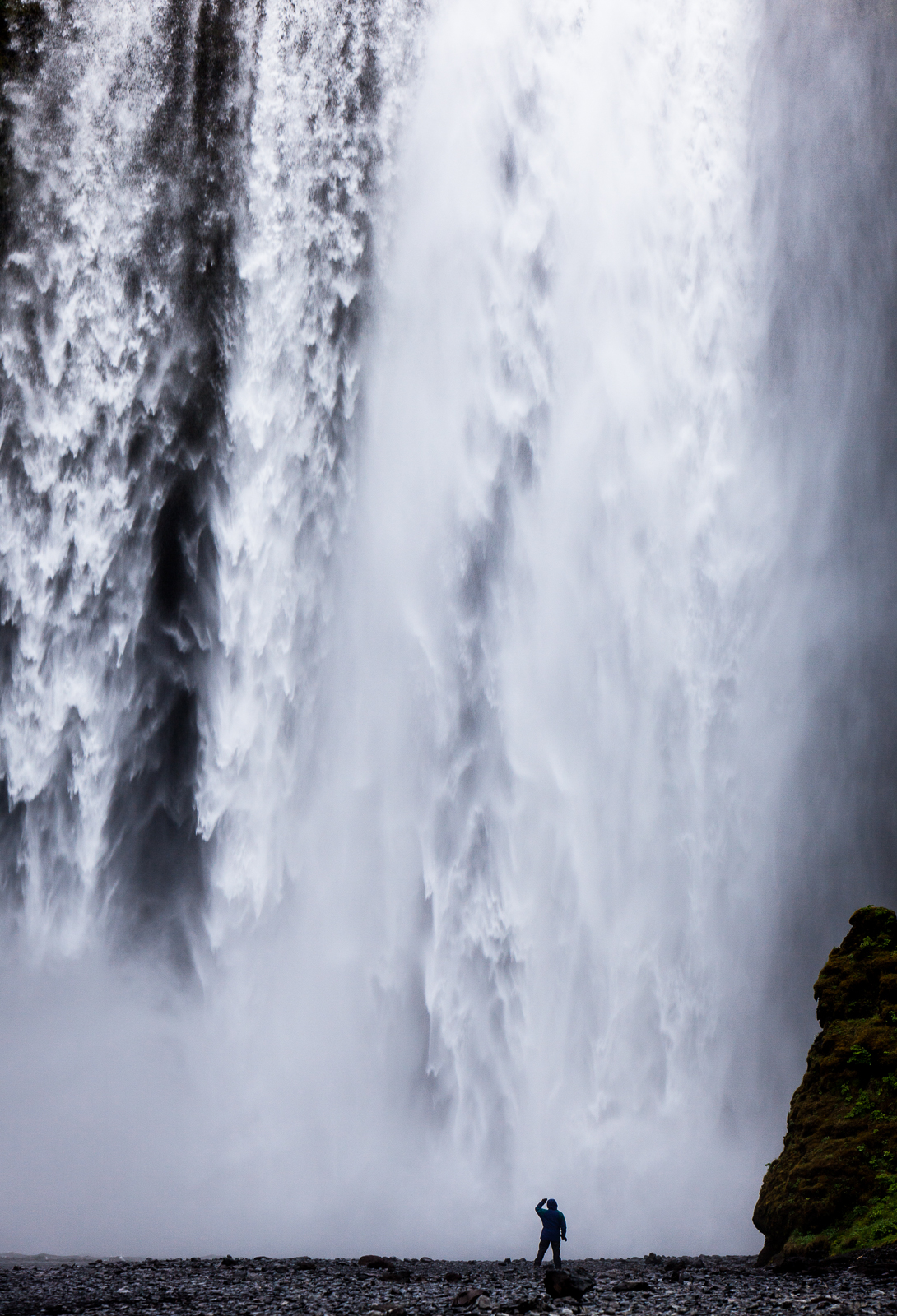 With plenty of slack in the schedule you can afford to wait until you are, quite literally, alone with nature. [Click to enlarge!]

I know which experience I prefer.

So, that is a very long-winded way of saying that, now that I have more time to explore the Thingvellir region of Iceland, I’m not adding any additional sights to visit and instead am going to concentrate on those already on the itinerary: The geyser Stokkur, Gulfoss and the enigmatic Bruarfoss. I may revisit Skogafoss as, although it is 100km out of my way, I still feel a photograph is waiting for me there.

This entry was posted in Travel and tagged Europe, Iceland, travel, trip planning.