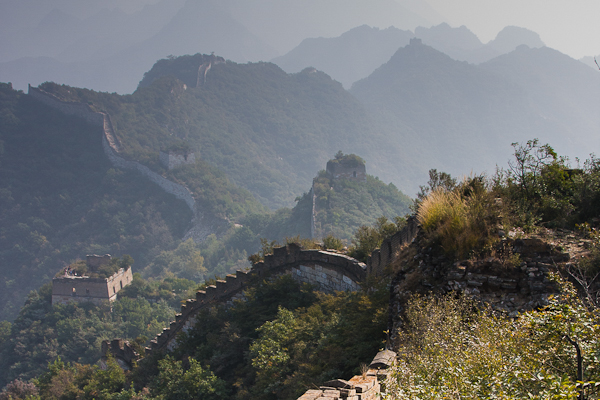 I was recently chatting to someone about the China and I just thought I’d post a photograph taken there five years ago.

One thing you simply have to do when in Beijing is visit the Great Wall. There are several sections readily accessible from Beijing and many hostels and hotels offer day trips to these. The most popular section is Badaling. Completely reconstructed, it offers all the tourist amenities; toilets, coffee shops, souvenir stalls, cable car lifts to name but a few. Problem is everyone goes there – several people I bumped into even referred to it as Disneyland, which should give an idea as to the experience you’ll have!

Next are Jinshanling and Simatai which offer a great 9km walk between the two. Though not as touristy as Badaling, it’s still very much on the tourist trail. Another section is Mutianyu which hasn’t been reconstructed to the degree that Badaling, Jinshanling and Simatai have been. However, though the help of a photographer who was based in China at the time I found myself at a remote farmhouse in Jian Kou with only three Chinese words in my vocabulary…

Most of us are aware of the Great Wall of China, so I’m not going to go  into the details other than to say that the Great Wall is, strictly speaking, several walls built over a 2200 year period and stretching 6400km or so. Many sections have disappeared altogether whilst others are in a state of dangerous disrepair. As can be seen here, the section of the Wall at Jian Kou is losing the battle with nature and hence its more familiar name of ‘The Great Wild Wall’.

The Wall served a number of purposes, the primary of which was defensive. Over the course of the Wall, the frequency of the guard and signalling towers varies, but here at Jian Kou they can be found on a regular basis. Presumably this is due to the mountain terrain – from a given vantage point you don’t get to see much of the Wall before it disappears over some ridge.  An attack from the ‘northern hoards’ could be communicated back to Beijing via smoke (during the day) or fire (during the evening) in very short order. The signalling system was pretty elaborate too and could communicate such facts as the number and nature of invaders over 500km in a number of hours.

You don’t so much walk this section of the Wall at Jian Kou as hike it. You are continuously climbing and descending as the Wall undulates its way over the mountains and it’s a very picturesque way to keep fit. For us hiking the Wall today we also have to contend with the vegetation that has taken hold. Also the appearance of the Wall varies over its length – local materials have been used wherever possible and at Jian Kou the rocks are laden with the mineral dolomite, giving a white appearance.

One of the many nice things about avoiding the touristy sections is that you have the Wall largely to yourself. I was reading that Badaling gets about 1 million visitors a month. By contrast over the course of six hours at Jian Kou I bumped less than a dozen Chinese students. You do have to be careful when walking – death is relatively rare but not unheard of at Jian Kou. It’s also a good idea to let someone know where you’re going. A sprained ankle out here in the mountiains could turn into a nasty experience real quick…