As I’m not going to be around over the Christmas period, I thought I’d share the five images taken this year that I am most happy of.

The idea came to me whilst on a train home at the end of a 61 hour work week: I was fighting not to fall asleep and so began going through some photographs on my iPad in an effort to stay awake. It worked as I found myself flicking back and forth between images trying to decide which I liked more.

I thought I’d share my choice of top five over the course of the week. I hope you enjoy them. 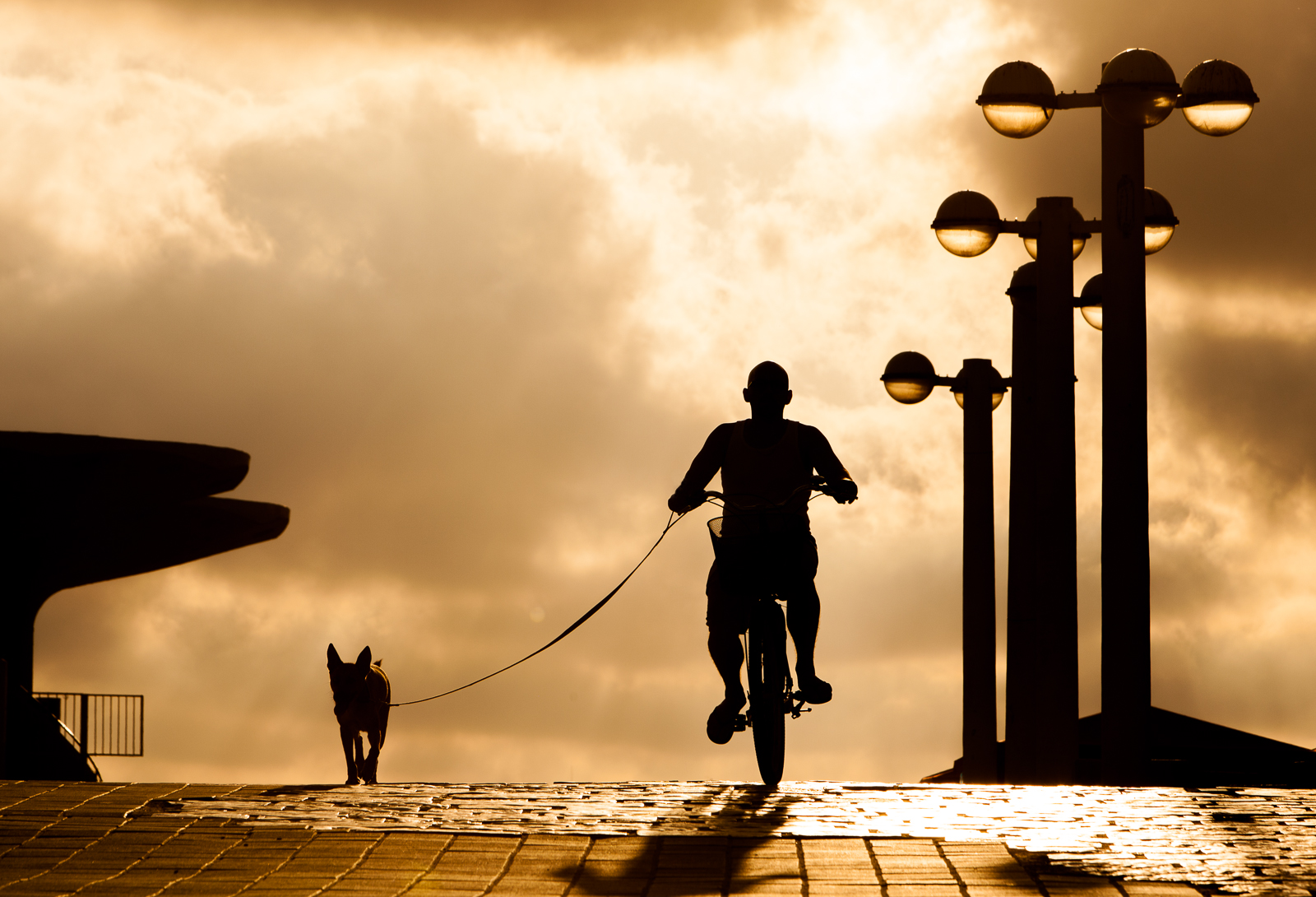 Is the dog keeping up with the man, or the man with the dog? I’ll never know for sure but the question keeps making me smile…

This image was taken in Tel Aviv in early June. I was on a training course at the headquarters of one of our vendors. The days were long and we didn’t finish before 6PM each evening which, considering that sunset was just before 8PM, meant heading straight to the local push bike rental station and a mad dash across central Tel Aviv to the beach in the hope of a hour of photography.

If you ever visit Tel Aviv – and you should as it is a great city – the beach is a must: A long golden ribbon of sand stretching from the wall of Old Jaffa to the chic bars and restaurant by the harbour. What I loved about it most was the rhythm – the palpable thrum – of humanity that could be found along its length. The old, the young and the in-between. The athletic, the office worker, the card sharks, the musicians, the friends and the lovers. Everyone was making use of the beach and, as I have described it before, for me it was the heart of the city.

One of the nice things is the beach is also west-facing, so if you like the whole ‘sun setting over the sea’ thing then you’re in luck. But I was after something a little more – well to be honest I don’t know what I really wanted, but something that summed up Tel Aviv. And there was only one thing: Youthfulness. Not of body, but of spirit.

I found a great spot up near the harbour and it seemed that it was a popular path to get down to the beach. It had this great reflection of light coming off the cobbled stones so I set up an waited for the right moment but it became obvious that I may have chosen the wrong spot as there was a near constant flow of people either heading to, or coming back from, the beach. The resulting images were a mass of ill-defined silhouettes with no focus and no real story. Still I waited and people became curious as to why I was sitting in the middle of a path, camera on tripod and not actually taking photographs. So conversations ensued luck was wished. Then it happened.

A young couple appeared over the crest of the path carrying surfboards. It was what I had been waiting for – the essence of Tel Aviv in my mind. There were very few people around and I had a clear definition of them in silhouette (I love shooting people in silhouette). They knew I was photographing them and so we got talking and they liked the image so email addresses were exchanged.

I stuck around a bit longer and I was just thinking of moving on as the light was fading when these two appeared over the crest. It made me smile even as I pressed the shutter. And it made me smile again yesterday after a long and tiring week.

This entry was posted in Frame by Frame and tagged Israel, selection, Tel Aviv.