Today I’m halfway into my alternative top five from this year and is one of the harder-to-find places along the southern coast. 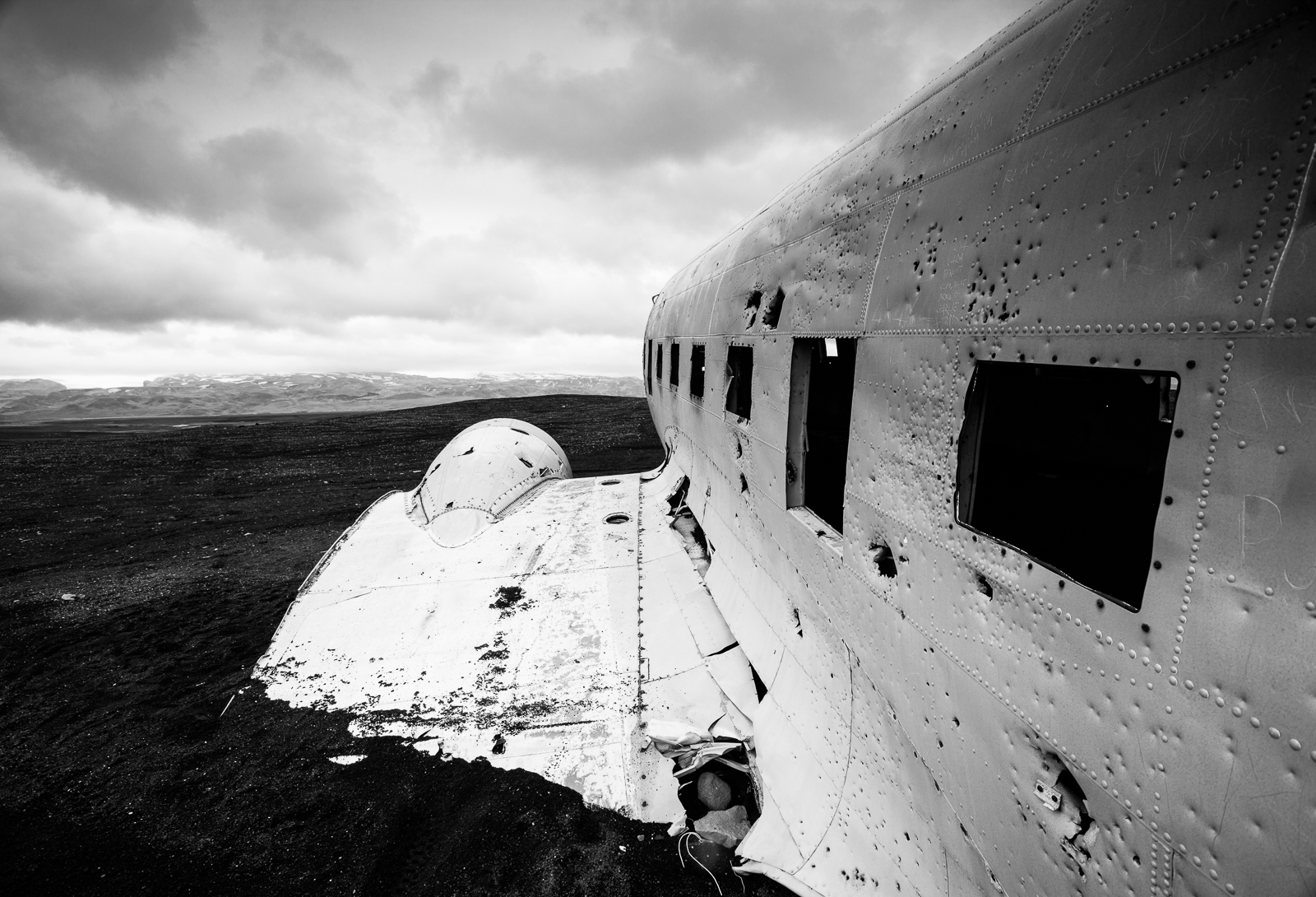 Faith can be an important quality when trying to get the shot… [Click to enlarge!]

Whilst accounts of the exact date and route – and even the cause – vary some believe the original report in the Icelandic newspaper bear the closest resemblance of the truth. On 21st November 1973 whilst returning from Höfn a US Navy Super Douglas DC-3 was forced to make an emergency landing when heavy icing set in over the Mýrdalssandur sand flats. The plane was able to stay aloft long enough to send out a mayday before eventually eventually coming to rest on Sólheimasandur Beach along Iceland’s southern coast and about 170km from Reykjavik. The crew of seven survived  – surprisingly with no injuries – and were rescued in very short order. The US Navy made plans to recover the craft but these never came to fruition whether due to the weather or the cost. And so forty years on the aircraft still sits on the beach as a silent reminder that Iceland’s  unpredictable weather should not be underestimated.

Finding the wreck requires a combination of planning, keen eyesight and faith. It is not on any map and nor is it signposted and so if you do want to see the wreck for yourself, planning is the order of the day. I had discovered the GPS coordinates of the site and so could accurately locate it on Google Maps. In fact once you know where to look you can actually see an indistinct dark outline of the plane if you zoom right in on the map. But, locating the plane on Google Maps merely tells you were the plane is and, as the old saying goes, it is not the destination that is important, but rather how you get there.

I continued trawling the Internet and found a few descriptions on the route people have taken although distilling the most descriptive of these to its essence effectively left me with “after a long but slight incline on Route 1, turn through a white gate after a green field”. Not exactly confidence building. Still more time was then spent using Google Streetview back and forth along sections of Route 1 and then I found a likely candidate albeit the gate was not white and the field wasn’t particularly green.

So it was facing this gate that I found myself one morning debating if I really wanted to take the hire vehicle off on to the black beach with no actual path to follow and simply drive toward the sea.  Getting lost was not really the issue; getting stuck was. But fortune favours the brave and so off I went.

It was an odd experience. The beach is wide and long and essentially looks as flat as a pancake. Visibility was good but as I continued to drive the landscape didn’t really change much. Planes are quite big and this one was a shiny, silvery lump of metal on an otherwise black background. So where was it? And that is where the faith was required. The beach may look flat, but is wasn’t and  just after what must have been the third thought of giving up, I crested a mound and there it was!

I visited the plane twice, each time for over an hour. In that time three other visitors made the journey out to see the plane. Maybe more did but their faith failed them.

But that is OK; it was nice to be alone with a little bit of history…

This entry was posted in Uncategorized.