Keeping Warm in Antarctica: What and How Much to Take…

With the start of August comes the point of no return for those lucky enough to be heading for Antarctica this season. Most expedition operators require the final balance to be paid three months before the expedition and as the season opens in November, those who haven’t already paid the remaining balance will be making plans to do so now.

Once you’ve committed all that money at some point you’ll need to turn your mind to some of the other logistics such as how to travel between the international and domestic airports in Buenos Aires, differences in baggage allowances between different airlines and so on. However, at some point the same question is likely to crop up: Just what does a fashionable Antarctic-bound traveller wear this season? 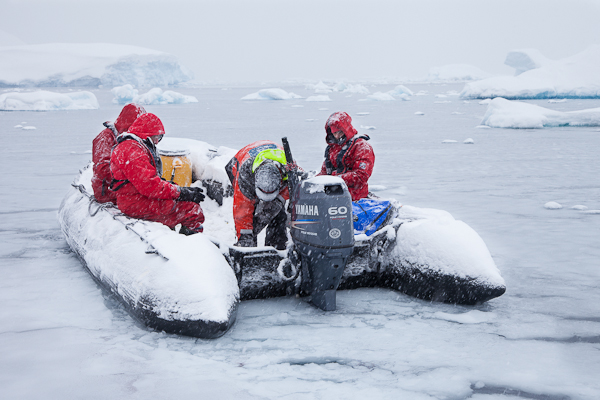 Zodiac propellers break several times a season due to ice. When they do and you’re on-board, being warm can be quite nice…

Keeping warm and dry is such an obvious requirement that I don’t see many people talking about it which can be a bit frustrating if you’ve just spent upwards of GBP £5000 on a trip and are not sure what or how much to prepare. Mention Antarctica and most people will reasonably imagine blizzards, breath that freezes as you exhale and the kind of cold that results in frostbite if skin is left exposed more than a few seconds. Which is all true, of course – just not when and where you’ll be going. First of all, expeditions only run from late Spring to late Summer when the sea ice surrounding the continent has melted sufficiently for an approach to be made. Second, even on the ‘Below the Antarctic Circle’ trips, you’re not really venturing that far onto the continent itself. In fact, look on a map of Antarctica and you may be forgiven for feeling a little let down. Don’t be – it’s stunning. In fact, were you to venture inland, without very specialist equipment and a lot of physical and mental expertise you really would end up a permanent resident. But, up on the Antarctic Peninsula, expect daily temperatures in the range of about -5C to +2C. This might be an inconvenient fact that you want to omit when telling friends of your Ranulph Fiennes-like exploration of Terra Incognita, but it does at least lend some reassurance as to not having to spend another vast sum of money on specialist clothing. 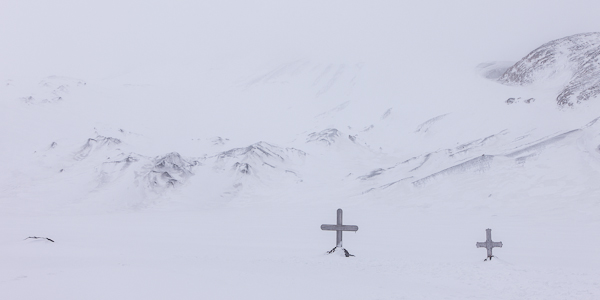 Your expedition leader is trained to ensure you don’t join these unfortunate souls on Deception Island, but being cold can really ruin your experience…

That’s not to say that you shouldn’t prepare. I didn’t want to be so cold that I hated the thought of venturing off the ship. Indeed, one of the other travellers on the trip I made was so visibly cold on one Zodiac cruise that we had to return to the ship to let him off. That would have both annoyed and depressed me had I been him as for me, like many others travelling to Antarctica, it is a one-time journey and missing out on any of it would be awful.

I spent ages reading blogs and travel sites looking for clues on the ideal wardrobe to take. It was all a bit frustrating really as many sites talked about following the layered approach to clothing, but none really got specific. For example, using base layers rich in merino wool seemed a consistently popular suggestion, but with prices ranging from GBP £35 to GBP £150 per garment, it didn’t narrow down the options much. I could go ‘cheap’ and risk the garments being not warm enough, or I could go expensive’ at the risk of needing a second mortgage. What I needed was a nice summary of items that someone on a budget had used when in Antarctic, how they had used them and what they thought of their effectiveness. That would have helped me a lot.

With the benefit of hindsight, you don’t have to go mad; many people wear ski clothing – which is fundamentally designed for a cold weather climate – and they do just fine. Others, like myself, checked out reviews on Amazon on clothing and asked friends who have an outdoorsy life if they could recommend items based on experience. So, here is the type of article that would have helped me this time last year when beginning to look for clothing.

These are designed with one purpose; to keep the rain and wind off you. They will not keep you warm. That is important as most expedition operators will offer (sometimes free) a hire of a outer jacket and trousers. Take the offer, but remember you’ll still need the mid- and base layers.

I would just re-iterate the need keeping your head warm as much as everything else. Woollen ski hats were worn by many and they were just fine. Again, the weather conditions will be similar to the average ski resort, just you’ll be travelling on the sea several times a day.

These add additional warmth control to the base layers and usually come with a zip to allow control over how much heat escapes. Mid layers are (usually) worn as a single item on each part of the body. If you’re worried about keeping warm, just double up on the base layers in the next section.

These are designed to provide basic warmth and to quickly wick sweat away from the body before it can cool down and cause problems. In truth I doubt you’ll be sweating much in Antarctica – aside from the coolness of the climate, you don’t really exert yourself too much.

The other issue I had was just how much clothing to take. The average Antarctic voyage is between 10 and 14 days and so I started with the notion of a change of clothes for each day. This idea very quickly disappeared when I adding up the cost. Luckily all the ships have an on-board laundry and so you can quite easily get items washed with a good turnaround time – on the Akademik Ioffe it was under a day, but larger vessels may take slightly longer.

The idea of taking less clothing will appear even more when you look into the practicalities of travelling down to Ushuaia – namely that the domestic airlines that carry you between Buenos Aires and Ushuaia (where you board the ship) officially has a 15Kg per person baggage allowance. They often waive that, but be prepared to have to pay extra. 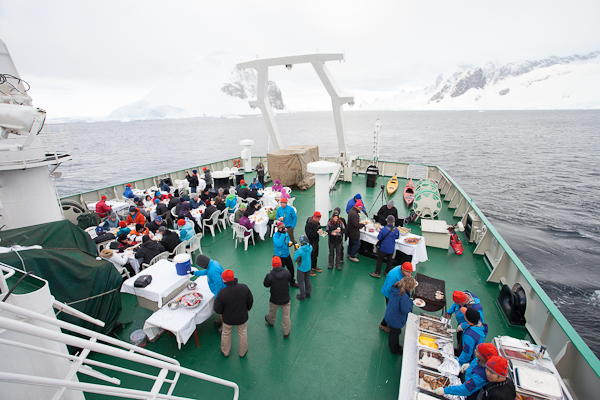 Don’t worry, you don’t eat outside every night, but you simply cannot go to Antarctica and not have a BBQ…

At this point, it’s worth mentioning that one of the benefits of natural fibres such as merino wool is that they’re very good at avoiding odours and this, coupled with the fact that I didn’t sweat when out and about meant that I could wear the same layers two or three times with no issue whatsoever. With a typical voyage to Antarctica of 12 days, this option, coupled with the on-board laundry, means that you can get away with three outfits. If you are in the same situation that I was and have no suitable clothing, the thought of only having to buy three outfits really is appealing.

I do hope that the above helps someone looking to travel to Antarctica, or maybe the Arctic, and who is trying to work out what and how much clothing they need to take. If you have ski clothing already then that’ll be fine, but if you do not, the above is field-tested by me 🙂

PS: If you are going, when you are given the chance to send postcards home, send one to yourself. You’ll regret it if you don’t!