After taking my first deliberate ‘selfie’ in Iceland against a backdrop of the stunning Skogafoss waterfall that was less about being a selfie and more about the sheer immensity of nature, I knew I was going to take another selfie in Ethiopia. And I knew precisely where too.

The volcano at Erta Ale – ‘smoking mountain’ in the local Afar dialect – is an unusual phenomenon. One of only six known lava lakes and the oldest having been present since 1906 it is the result of a hole descending 47 kilometres into the Earth at a place where three tectonic plates are slowly ripping the African continent apart. The resulting upwell of magma isn’t pressurised under a cap as is the case with normal volcanoes and so rather than violent and explosive eruptions the lava displays far more gracefully.

But lava is lava and as benign as Erta Ale appears the lava is a distinctly warm 1200°C. The lake also passes through cycles of activity and by the third day of our visit there was a significant rise in the amount of gas in the upwell resulting is some pretty spectacular eruptions. One of the side effects of the eruptions was the occasional lava bomb being thrown into the air and that is not something you want heading your way: Even if they are small, they are still molten rock and will burn through you like a hot knife through butter. It is one of the reasons that you do not stand at the very edge of the crater, the other being that the edges are so brittle and fragile that they collapse at the slightest provocation. Over the years several tourists have died here, our guide Enku himself losing one, simply as they ignored the advice they were given.

I knew I wanted a silhouette shot where I was as close to the edge as I could be so I stood out against the glow of the lake. I also knew that I didn’t want to die either so I headed off with Enku to find an appropriate spot. As a trained geologist, having worked for a number of mining and exploration companies, he could read the rise and fall of the edge and decided that here, at about one metre, was the closest it was safe to approach. Even then he was less than keen about spending time this close and I remember being a little disappointed that a nice Strombolian eruption didn’t occur as I stood there. But, even at a metre back from the edge, the heat was intense – over 60°C if the readings earlier in the day were correct – and waves of poisonous hydrogen sulphide were buffeting me. I had to be quick. 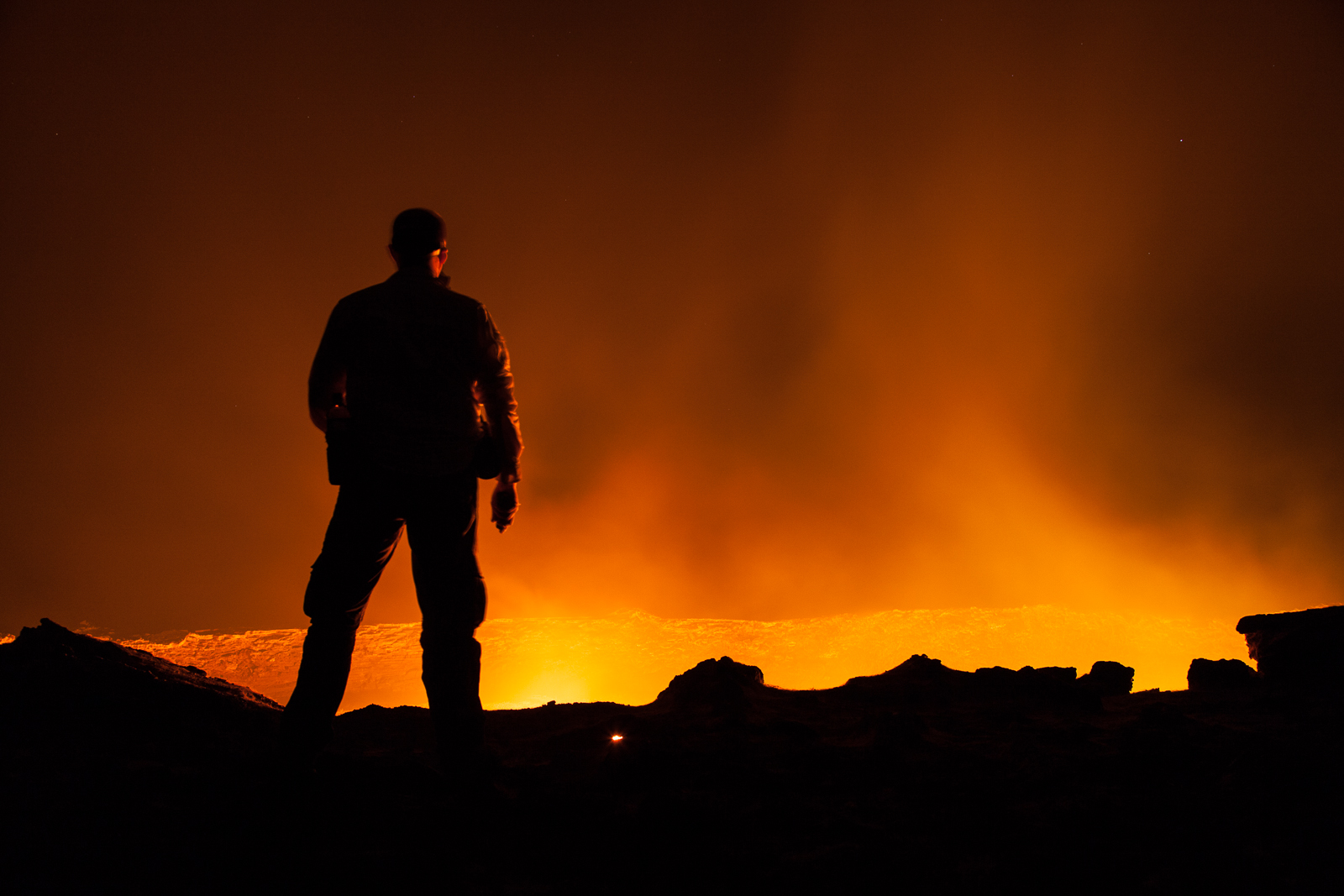 This entry was posted in Destinations, Frame by Frame, Travel and tagged Africa, Danakil Depression, Landscape.